Look Back: Lost to well-cared-for, rural cemeteries have different fates 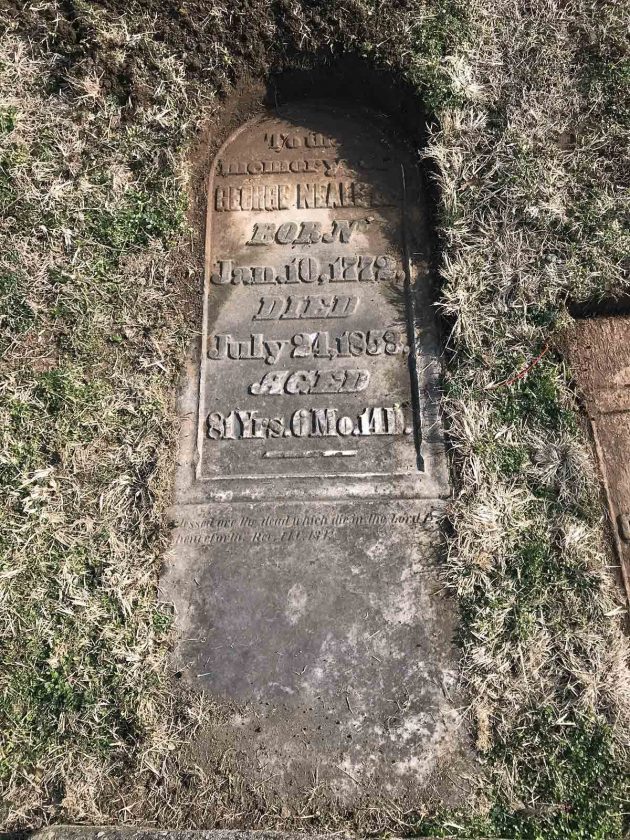 Shown above is the still beautifully lettered stone of George Neale, who brought his family to “the Bottoms” c. 1807. Neale died July 27, 1853. His wife, Sarah Lewis Neale, was the daughter of George and Violet Guest Lewis of Loudoun County, Va. George Lewis, being very wealthy, purchased all of George Washington’s western lands from the Carters, Washington’s heirs. The Neale Cemetery is described below. (Photo Provided)

We continue brief histories of rural cemeteries, using the works of John A. House:

Cooper Graveyard — “Another graveyard in this vicinity [Mineral Wells] lies on the north slope of a ridge perhaps one or two hundred feet south of a low gap in the ridge enclosing the west side of the Little Tygart basin. It is across the road, and perhaps 150 yards north of the Cooper schoolhouse and — on a guess — a mile from the bridge at the crossing of Tygarts Creek.

“The Cooper home is said to have been across the low gap on the side of the next knob. Henry Cooper, the founder of the family, bought 250 acres of land of John Stokely, receiving his deed in 1817. The hewed log house standing on this farm was purchased in 1910, and the ‘Old Cabin’ Museum of the Pioneer Daughters of America erected in the City Park from the material.

“The graveyard doubtless dates back to at least 1815, though the oldest date I found was 1845. It was probably a private burying ground, and is enclosed by a plank fence, but badly grown with weeds and briers when I visited it in October, 1927.”

Cemetery near Meldahl — “There is an old graveyard lying on a little point by the side of the river road just below the mouth of Sandy Creek, and between the Ohio River and sandy bottom lands. It is small, and surrounded by trees on three sides. It is covered with a dense sod of grass, and has many marble gravestones, mostly blackened and difficult to decipher.

“It seems to have been the burial place of a German colony, as nearly all the names were German. I did not note the name of Meldahl, whose home was just below.”

Note: Mr. House noted the names Seestaedt and Weisenberger. This burying ground has not been located.

Old Lewis or Neale Graveyard — “There is another pioneer graveyard lying well back from the Ohio River, and about a mile further down than the old Lewis home.

“It is up on a little point by the side of a small hollow, which cuts down from the table lands of the second bottom to the lower grounds below. It lies on Francis Keene’s (east) side of the line dividing the lands of Keene and George Neale, and back of an old tenant house — once the schoolhouse of that district.

“The graveyard is now out in a pasture field, and no care is taken of the graves. There had been a large locust tree growing among the graves, but it was broken down in the storms of last summer.”

Note: This cemetery is on the DuPont-Chemours Plant site and is being well maintained.

Virus ripple effects could be deadly

You’ve heard of “the butterfly effect.” If not, the Cliff’s Notes version is that the most minuscule action ...