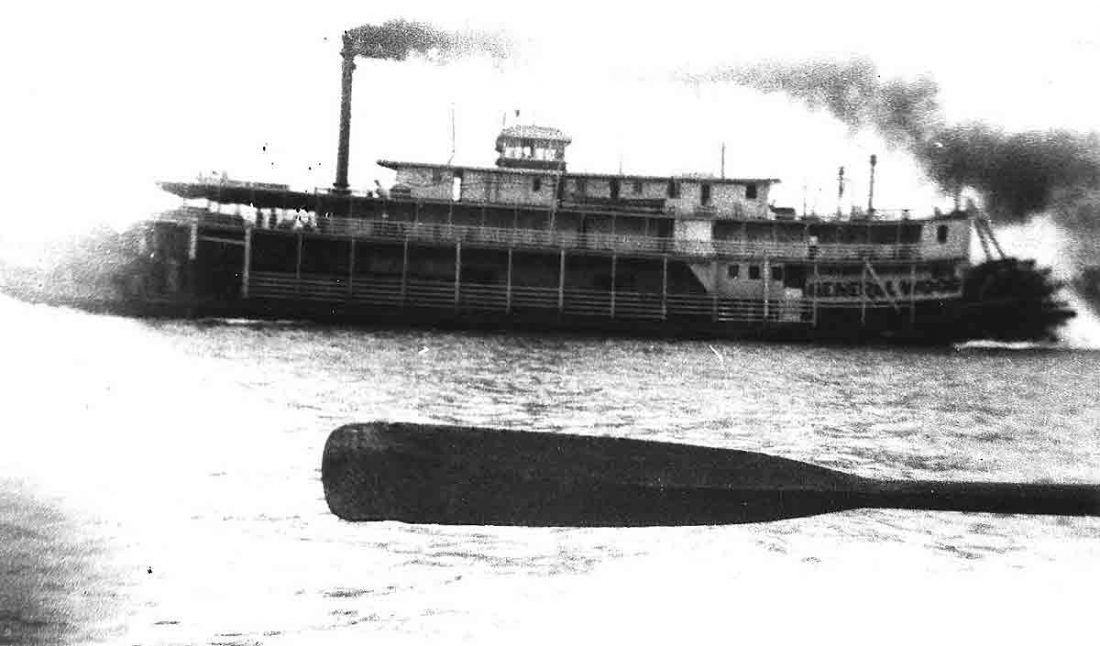 It was a scene such as shown above that Marion D. Sullivan wrote about and which was published in Godey’s Lady’s Book in 1847. This concludes the three part series of her exciting ride across the Ohio River from Belpre to Parkersburg. (Photo Provided)

Part two of the trip across the Ohio River found the trio in the skiff directly in the wake of a huge steamboat. Their plight continues:

“Our mirth was interrupted by a roaring and jarring downstream, and looking about in that direction, we perceived another large steamboat directly upon our track, while a third was coming rapidly down the river. “Pull away, George, we’ll be run down.” At this moment, the largest boat, which was just nearing the Virginia shore, wheeled suddenly around, as if an odor from an onion plantation had suddenly caught her olfactories, and now we were under her bows. Her fires gleamed redly upon us, and our little boatman, without the slightest indication of fear in his countenance, strained every muscle to extricate the skiff from the boiling mass of direct waves and return waves, all mixed up and jumbled together, in unimaginable confusion. If we had been provided with four more oars, how we would have cut the waters and left the steamers behind. Frank, though a mere child, could pull a strong oar; he had often rowed me across Kanawha; but we were compelled to sit still, and enjoy, with some mental trepidation, the high excitement of the scene.

“The three howling monsters of the river followed hard with their fiery eyes gleaming upon us. The waves dashed up — their snowy crests tinged by the crimson sky. The shores lines with spectators. George pulled with astonishing effort, and we reached the shore a few yards in advance of our pursuers, but how to land?

“The river was boiling like a caldron, the skiff was rising and falling, too rapidly to permit our landing. The anxious watchers for our safety, now that we had reached the shore, forgot the still remaining difficulty, and turned their attention to the marvelous, and to me still, unaccountable evolutions of the large boat. A strong ready arm might have aided us, and many an arm would cheerfully have done so, had any person noticed our dilemma. Oh, thought I, for a real live Yankee, from the north, his bright blue eyes moving in every direction, with so little effort not to impart the slightest motion to his flaxen locks, and seeing at once, every object before and around him. Few besides Yankees, trouble themselves to attend to more than one thing at a time.

“Not a moment was to be lost. Frank sprung high and dry upon the shore — I followed, with some misgivings, but escaped the waves. George threw his oars into the skiff, and fell down steam with the current. We were now at liberty to admire the full grandeur of the scene. No wonder everybody was too much engrossed to attend to us after the real danger was past. The clear gold and crimson sky — the white and flame colored waved tossing wildly about — the river full of boats. On board one of them, a military company and a full band, in attendance of some great man, perhaps Henry Clay; I have forgotten who it was.