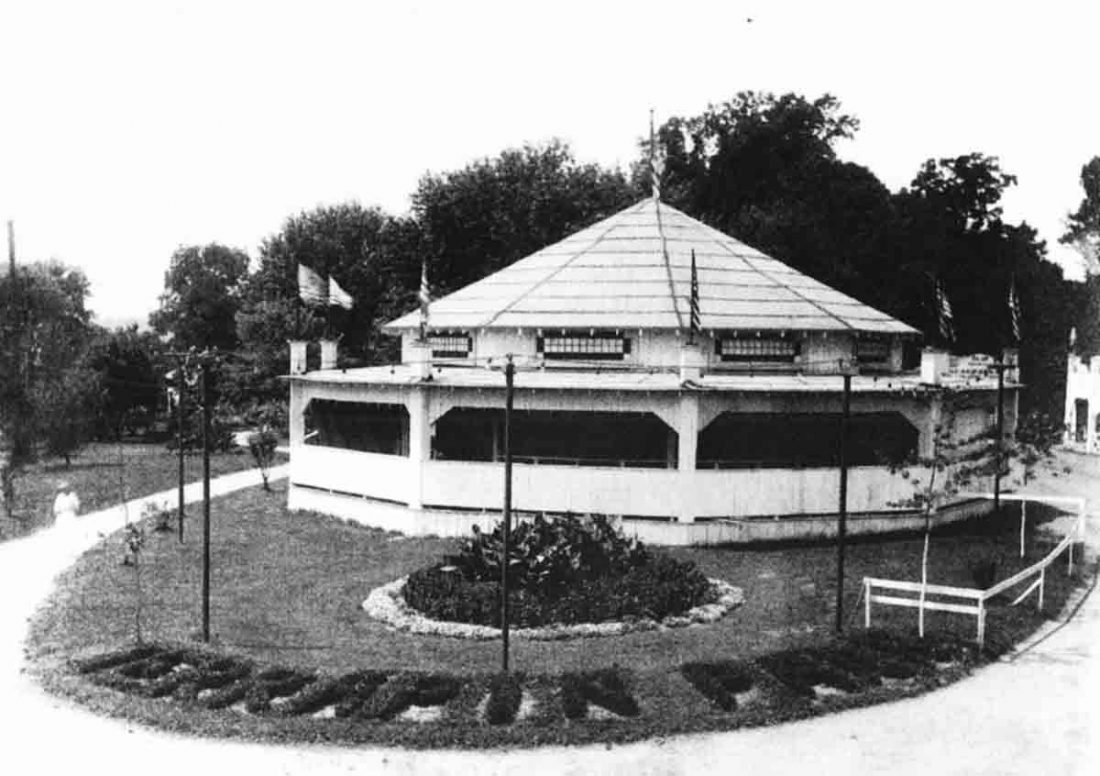 The He Haw Haw He 1913 Herschell-Spillman merry-go-round was located just inside the park entrance in its octagonal-shaped pavilion. Photo and text from Terrapin Park, Parkersburg West Virginia, A History by Jeff and Christy Little. (Photo Provided)

The work at Terrapin Park is being rushed these days and a great transformation is going on. The big auditorium is rapidly nearing completion, as the force of men at work on it is a large one. Contractor Carfer is rushing things as rapidly as possible and will have the building completed at the time specified in the contract. Hugo Heydenreicht has a force of men engaged in grading the upper end of the park fronting on the street railway, where large beds of flowers will be located. This will be one of the prettiest spots in the park. Several other buildings will be erected, including one for bowling alleys. The park will be one of the most popular resorts in the state, and will be visited by numerous excursion parties during the summer.

Bids were all rejected

The bids for the various privileges at Terrapin Park were opened Saturday afternoon. There were about twenty bids in all, but they were all rejected except one, for the merry-go-round, which was accepted. The bidders on this privilege were John Busch and M.S. Thanhouser. They propose to furnish the finest steam riding galley ever brought to this state. It is similar to those seen at Atlantic City and will cost about $5,000 when ready for operation. The Parkersburg Sentinel

How the park will be lighted

Terrapin Park will be one of the best lighted spots in or about the city at night, after it is opened to the public. Ten powerful arc lights will be distributed throughout the grounds, and seventy-five chandelier lights will be placed in the auditorium. Every nook and corner of the big structure will be well lighted and as bright as day when occasion requires. The Parkersburg Sentinel

TERRAPIN PARK BUILDING is the largest frame structure in West Virginia. Peter McKey, foreman, with the following able assistants, were the carpenters at work on this building: W.H. Cooper, A.W. Hockman, Mel. Coberly, Geo. Goins, John Hastings, W.C. Neeland, Alec Sutherland, John Michem, I.N. Langfitt, Andrew Deem, Floyd Lytle, W.H. Wyatt, Trumble Helms, Frank Newland, J.E. Satterfield, W.H. Jeffery, P.J. Atkison, E. Foggin, Josh Deems, John Pickering, H.S. Bell, John Rockhold, Charles Wilson, Ray Coffer, H.S. Barber, N.A. Martin. S.M. Carfer is Superintendent of Construction, while he expects every man to do his duty, he is very considerate of his employees. Mr. J.M. Carfer, the contractor, can feel proud of his work here. The expert plasters with Mr. George McHenry as foreman, are, Messrs. Edward Shattuck, Chas. Shattuck, Rauel Johnson, Geo. Berry and W.H. Newhart. The hod carriers are: Robert Washington, Tim Easley, Anderson Foster, and C.A. Carpenter. The water carriers and helpers Nelson Langfitt, and Floyd Lytle. The building has a frontage of 200 feet, 100 feet in the rear, and 70 feet deep, the tower being 80 feet. The dining room, kitchen and refreshment stands are on the first floor; the audience room being on the second floor. This mammoth building, including the commodious porches, could shelter 6,000 people. One of the most attractive features is the flower garden and fountain, which are controlled by Mr. Joseph Powell, who is a florist.