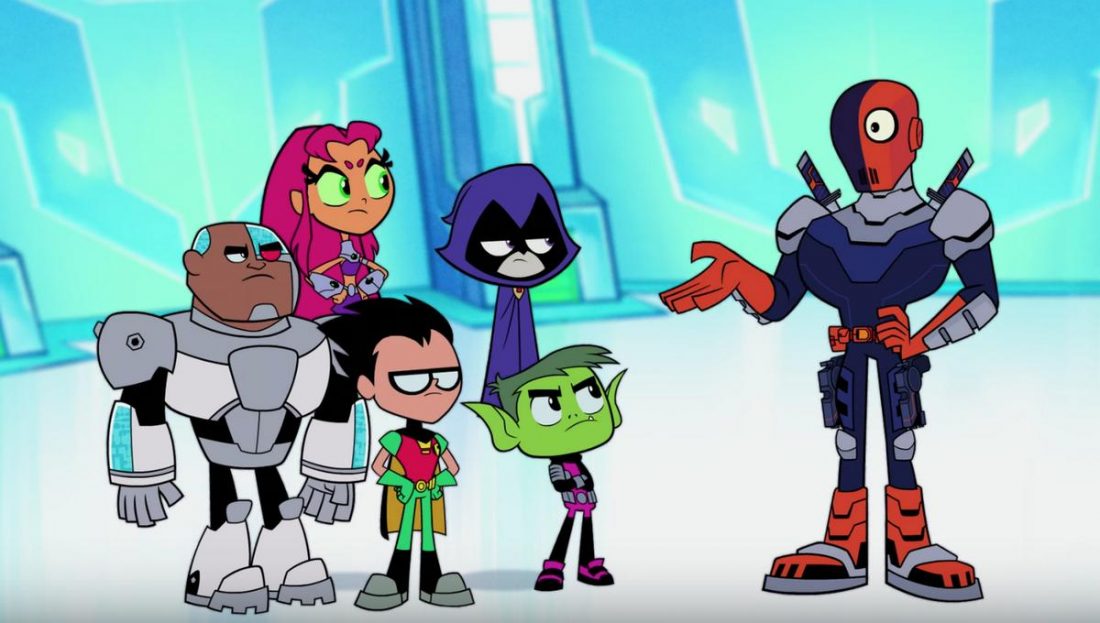 Deathstroke, right, voiced by Will Arnett, in a scene from “Teen Titans Go to the Movies.” (Image Provided)

One of the most dysfunctional families in comics will be featured in season two of DC Universe’s “Titans,” as Deathstroke arrives on the streaming series.

Already a familiar face (well, mask) on the small screen thanks to appearances on the CW’s “Arrow” and the animated “Teen Titans” and “Teen Titans Go!” series, the streaming show which resumed last week could provide the most true-to-the-comics version yet of the man named Slade Wilson.

Introduced in 1980’s “New Teen Titans” #2 as Deathstroke the Terminator, he was the ultimate assassin and mercenary. He joined the Army at a young age and rose through the ranks quickly thanks to his impressive fighting skills. An experimental treatment designed to make soldiers more resistant to truth serums instead enhanced his strength, agility and mental capacity, allowing him to use 90 percent of his brain.

Despite being a killer-for-hire, Slade was also a family man, having married a superior officer, Capt. Adeline Kane, with whom he had two sons, Grant and Joey. Joey was gravely injured and left mute after a group of mercenaries kidnapped him, trying to get information about one of Deathstroke’s clients. Adeline divorced Slade, took the kids and shot him, causing him to lose an eye.

The injury didn’t make Slade any less dangerous and his infamy as Deathstroke continued to rise. Grant grew to idolize the mercenary, despite not knowing it was actually his father under the mask. Grant became the Ravager, but died fighting the Teen Titans as a result of the enhanced abilities granted to him by the nefarious organization H.I.V.E. Deathstroke vowed to complete the contract.

Deathstroke later sent the earth-controlling Terra to join the Titans as a spy. The team was captured but freed by Nightwing (the former Robin) and Jericho, Deathstroke’s son Joey, who had developed the ability to possess people as a result of Slade’s altered genetics.

Jericho himself fell under the control of the disembodied spirits of the inhabitants of the dimension Azarath, now tainted by the evil of the demonic Trigon, father to Teen Titan Raven. The Titans and Deathstroke fought him, and Jericho regained control long enough to ask his father to kill him. Deathstroke did, believing there was no other way to help him.

It was later revealed Jericho jumped to his father’s body and remained dormant for years. Eventually, he took control of Deathstroke and violently tried to convince a new iteration of the Titans that children shouldn’t be superheroes. He later got a new body and his sanity restored, after which he rejoined the team.

Among his teammates was the new Ravager, Rose Wilson, Deathstroke’s daughter with, um, Terra (who joined the “Teen” Titans, so, yeah, it’s what it sounds like). Like Deathstroke’s other children Rose was burdened by her father’s legacy, shifting between wanting to follow in his footsteps and exact revenge for the mess he’d made of her life.

Four years ago, writer Christopher Priest took the reins of Deathstroke’s third solo series since DC’s 2011 New 52 reboot, and focused on the family angle. In flashbacks, he showed Deathstroke’s mistreatment of Grant and volatile relationship with Adeline, who pursues him on behalf of the U.S. government in the present.

Meanwhile, Deathstroke puts out a contract on Rose (who, in the reboot, is his child with an adult Hmong woman) in a bid to spend more time with her. He also gets entangled in Jericho’s relationship with his fiancee, who is spying on him as a way to keep tabs on his father.

And that’s just the interpersonal aspects of Priest’s story, leaving out all the political intrigue.

Deathstroke has long been one of those villains compelling enough to carry his own series, which often leads to them being pushed a little closer to the heroic side. In recent issues, Deathstroke has formed his own team of heroes, including the newest incarnations of Kid Flash and Power Girl, as well as Rose and Jericho.

* “Teen Titans: The Judas Contract” — Deathstroke’s machinations and origin are revealed in this classic story in which a traitor to the Titans is revealed.

* “Deathstroke the Terminator: Assassins” — Collection of the initial nine issues of Deathstroke’s first solo series, delving into his past and culminating in a battle, and team-up, with Batman.

* “Deathstroke: The Professional” — The start of writer Christopher Priest’s ongoing run with the character finds Deathstroke involved in multiple schemes and conspiracies involving international intrigue and his estranged family.