Look Back: Politicians, prohibitionists run the bases in Parkersburg 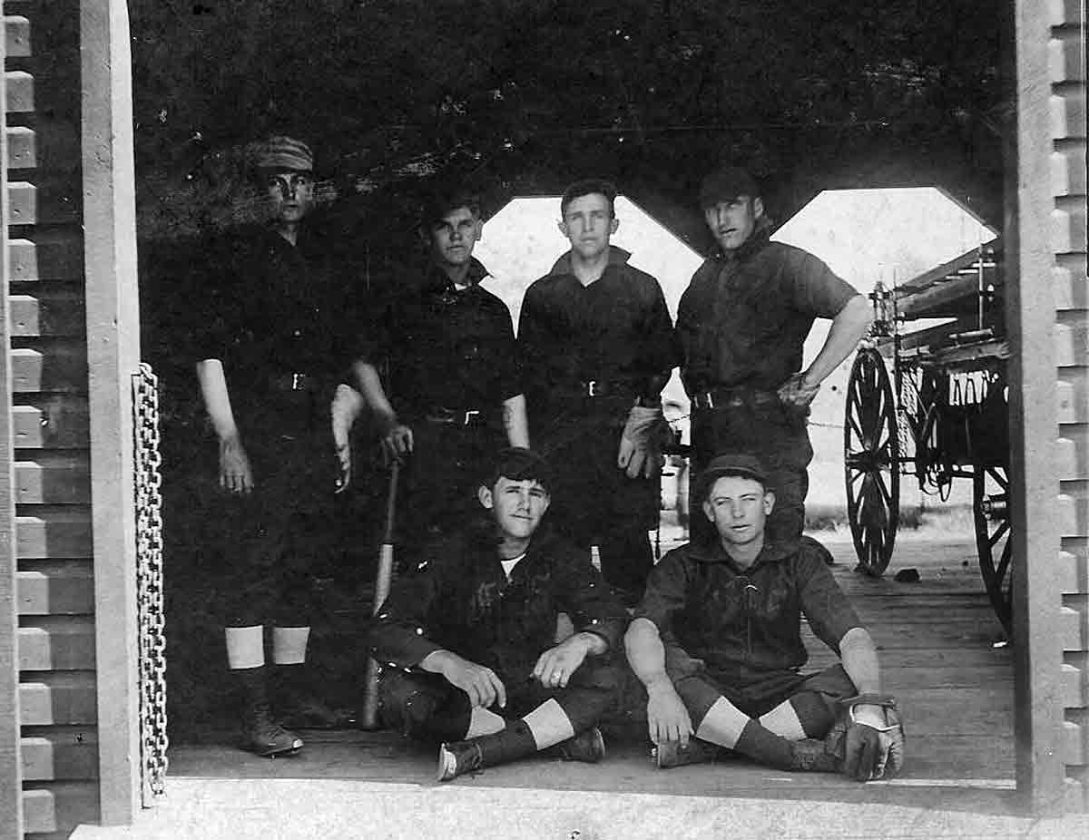 Photo provided by Bob Enoch Though the photo above is not identified or dated, the men appear to be posing in a fire station. The wheeled vehicle on the right is a piece of early firefighting equipment. It could be one of the Hose Companies mentioned in the article below.

City Council would do a very commendable act by passing an ordinance prohibiting the game of base ball within the city limits, unless on some vacant lot away from dwelling houses and other buildings. Some of the beautiful and costly windows of our churches have been broken lately by this ball nuisance; and it is getting to be altogether too expensive kind of fun.

There is fun on the Bristol. A challenge was issued by the Young Men’s Blaine and Logan club, to the corresponding Democratic club, to play a match game of baseball. The challenge is accepted as the following notice, duly signed by Capt. Wm. J. Butcher, given us this morning indicates: EDITOR JOURNAL: The Democratic baseball Club accepts the challenge of the Blaine and Logan Club, and will play them next Tuesday afternoon at two o’clock.

The game will doubtless be an interesting one, and will call out numerous spectators.

The game of base ball to be played tomorrow afternoon between the Democratic and Republican clubs, is attracting much attention. The following nines have been chosen to do the work:

The earth vs. the planets

The Franklin grounds were the scene of a crack game of base ball yesterday between “The Earth” and “The Planets,” two new nines who know how to play ball and are not afraid to go in on their muscle. “The Earth” obscured the brilliancy of “The Planets” by a score of 18 to 9. “The Earth’s” supporters were H. Crawley, Sorrell, McFarland, Hazen, Kelly, Gallagher, Barringer, W. Dudley and Hull. “The Planets” satellites were G. Crawley, Buehler, Hine, Flagg, Anderson, C. Dudley, Leonard and Keyser. Thos. Childers umpired and kept the orbs from flying off at a tangent. It was a good game, well played, a number of excellent points were made on both sides.

The Never Drinks, composed of Prohibitionists, have organized and are now open for a game with any other cold water prohibition aggregation. They will line up for play as follows: Caskey, catcher; Daddy Bekurs, pitcher; Jim Sheehy, first base; Joe Sheehy, second base; Will Buehler, third base; Ray Jennings, short stop; Farmer McNerney, center field; Red Malloy, right field; Will Moran, left field. They challenge any club in the county, Waverly or Snakeville preferred.

Registration begins tomorrow for children who will be attending kindergarten in the Fort Frye School District. ...

Getting to know the MOVRC: Senior Companion Program

The Mid-Ohio Valley Regional Council has been in Parkersburg since 1971. Created by an act of the West Virginia ...