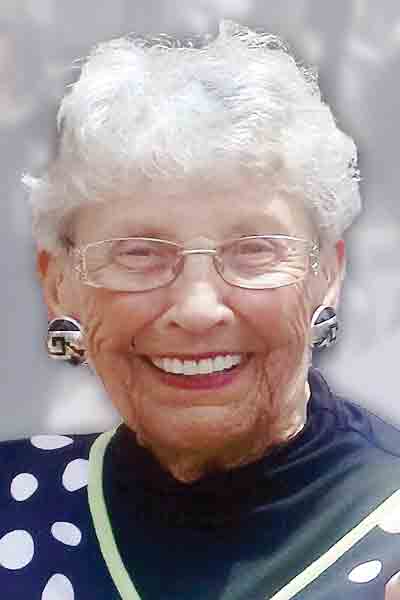 Phyllis C. Louden, 93, died peacefully at Eagle Pointe late on October 16, 2019. Born Phyllis Jeanne Casteel on September 9, 1926 in Cumberland, Maryland, she was the first child of Vernon A. and Ruth Beamer Casteel. During her childhood she lived with her family, including her younger brother Vernon Wesley Casteel (Soapy), in multiple places throughout West Virginia – Logan, Williamson, Charleston, and Huntington – about which many memories surfaced during her recent illness. She graduated from Huntington High School in 1944. She then attended Marshall College for her freshman year, after which her family moved to Parkersburg.

In Parkersburg she worked at several different jobs, including American Viscose, as a clerk at Dils Department Store, in the Wood County Clerk’s office, and as a pathology laboratory technician at St. Joseph’s Hospital. She and Malcolm Barrett Louden (Mac) met at Summers Confectionary on St. Marys Avenue after WWII and were married at the First Lutheran Church in Parkersburg on June 8, 1948. They lived in Morgantown until his completion of law school, followed by their return to Parkersburg in 1950 when he established his law practice.

Phyllis and Mac had four children: Barry Louden (Jo Ellen), of Vienna, Beth Louden Foust (Freddie), of Hillsboro, NC, Mark Louden (Melissa) of Palos Verdes Estates, CA, and Amy Louden Dehmlow (Matt) of Vienna. While raising children she painted as a hobby and participated in church and civic activities, in particular advocating the inclusion of the pool from the start in the new YMCA on Broad St. in the mid-1960’s, a program entitled “Sink or Swim”.

She completed her undergraduate education at WVU-P (then Parkersburg Community College), something she dearly longed to do since leaving Marshall, and then became Director of Volunteers at Camden Clark Memorial Hospital 1978-90 while continuing to raise children and help raise grandchildren.

After retirement she travelled with Mac to Europe to retrace his steps in WWII, and later circumnavigated the United States with him in a small car just for fun. She became a meticulous chronicler of family ancestry of both her and Mac’s families, discovering her first relative in America, a Belgian Huguenot named Phillipe who arrived in Philadelphia in 1682. She continued to be a creator, nurturer, and a good friend of many, always interested in what they were doing and what made them happy. She was an unwavering champion of family including her four children, ten grandchildren, and twelve (soon to be thirteen) great-grandchildren. She kept and cared for in her home, at one time or another, five elderly relatives during their terminal illnesses, and finally husband Mac until his death in 2003. She volunteered for Faithlink in her 80s, saying she “drove old people around”.

Phyllis donated her body to the West Virginia School of Medicine for medical teaching purposes, as did Mac.

Her family thanks her physicians- PCP Dr. Stephan Hanna, and Drs. David Cramer, Brian Powderly, Mike Brockett, Ken Leopold, Todd Hawkins and others for expert care during both her recent and long-term illnesses, and the staffs of Camden Clark and Marietta Memorial hospitals, Encompass, Elmcroft, Belpre Landing, and Eagle Pointe for compassionate attention and care.

A Celebration of Life service and reception will be held at First Lutheran Church, 1701 19th St., Parkersburg, 26101, at a time to be determined.

Information about this will be available at www.LeavittFuneralHome.com, where online condolences can be sent.

Contributions in Phyllis’ memory may be made to First Lutheran Church or the Parkersburg YMCA, 1800 30th St, 26101.