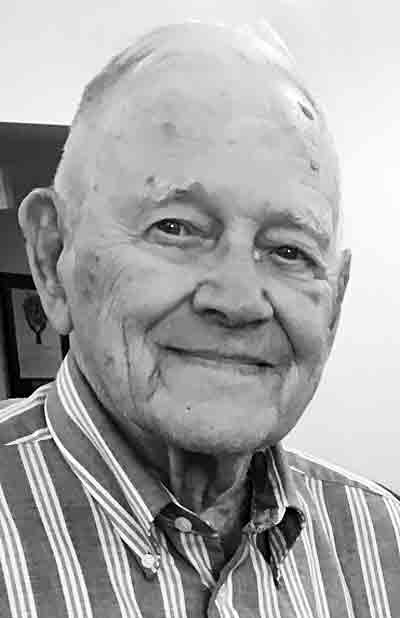 Charles Franklin Hughes, 95, formerly of Elizabeth, WV, went home to be with the Lord on September 9, 2019 at Amber Park Assisted Living in Pickerington, OH where he resided for the last 10 years. He was born on May 28, 1924 in Jackson County, WV, the son of the late Oley E. Hughes and Elsie Derenberger Hughes. Chuck was a 1943 graduate of Parkersburg High School and was a member of the Belpre Heights United Methodist Church. He worked at Union Carbide as an electrician from 1952 to 1982. He also built several houses in the Belpre area. Chuck was a World War II Veteran serving in the United States Navy from 1944-1946 on the USS Charles J. Badger in the South Pacific. In 2012, he went on the Honor Flight to Washington, DC. Chuck was preceded in death by his wife of 67 years, Ruth Moore Hughes, who passed in 2013. In addition to his parents, his brother, Floyd, also preceded him in death in 1997. He is survived by one son, Charles Franklin Hughes, Jr. (Frank) and his wife Jeanne of Slate Creek, WV, two daughters, Charlene Miller and her husband, David, of Pickerington, OH and VaDonna Jean Terrell (Jeannie) and her husband, Jeffrey, of Mooresville, NC; four grandsons, Matthew Miller and his wife, Leigh Ann, of Apex, NC, Eric Miller and his wife, Lisa, of Galena, OH, Jonathan Terrell and his wife, Amanda of Summerfield, NC, and Jacob Terrell and his wife, Sonya, of Huntersfield, NC; six great grandchildren, Kaelyn Rose Miller and Evie Wren Miller of Apex, NC, and Lila Grace Miller and Luke Andrew Miller of Galena, OH, Ava Terrell of Huntersville, NC, and Benjamin Adam Terrell of Summerfield, NC. Additionally, he is survived by one sister, Daisy Owens, of Coolville, OH, and two brothers, Paul Hughes, of Little Rock, AR, and Dale and wife, Clara, of Mineral Wells, WV plus several nieces and nephews. Funeral Service will be on Friday, September 13, 2019 at 11:00 a.m. at Sunset Memorial Funeral Home, Parkersburg, with Reverend Paul McGuire officiating. Burial will follow in Sunset Memorial Gardens. Visitation will be Thursday, September 12, 2019 from 4:00 to 8:00 p.m. and Friday from 10:00 a.m. to 11:00 a.m. at the funeral home. Memorial donations may be made to Belpre Heights United Methodist Church or Capital City Hospice of Columbus, OH.