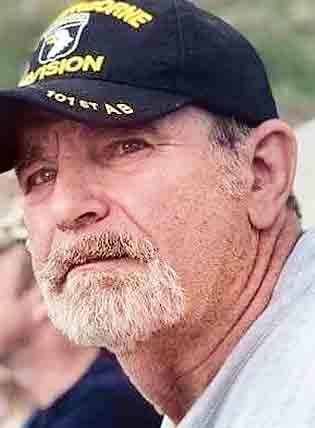 Robert Paul Jackson, “Bob,” entered into the hands of his Lord and Savior, Jesus Christ, on September 3 2018. Bob was born on December 9, 1943 in Baltimore, Md., the son of the late Edmond Carroll Jackson and Delcie Dotson Jackson.

Bob was an Army Veteran of the Vietnam era and served in the 101st Airborne Division as a paratrooper. He was awarded several medals during his multiple tours of duty.

Most importantly, Bob was a Christian and a member of the Pennsboro Church of Christ where Terry Jones served as pastor and also attended Pike Church of Christ where his brother Norman serves as song leader and Jamie Matheny serves as Pastor. Bob also considered himself for many years a faithful member of the televised Christian Church, Shepherd’s Chapel with Pastor Arnold Murray.

Bob is survived by his children, Joseph Michael Jackson, and Jessica Lynn McComas and husband, Edward and their two children, Edward McComas III and McKenzie McComas of Harrisville.

Bob is also survived by twin sister Judy Basile-Clark of Charleston, with whom he had a very special relationship throughout the years, as twins often have, her son Joseph C Basile III of Florida, and grandson Joshua Lacy Canterbury and his wife Sara Canterbury; brother Norman Jackson, a well known business man in Ritchie County, and children, Mark Jackson and wife Andrea and their children Mercedes Egan and husband Joshua Egan, a Ritchie County police officer, Ben Jackson and his wife, Cailin Jackson, Rebecca Goff and husband Billy Goff and their children Cody, Tucker and wife Lexie, Olivia, and Emily Goff, and Steve Jackson and children Reno and Regan Jackson; Sister Sandra Hammond of Georgia and former teacher in Ritchie County Schools and daughter Kelli Grogan and husband Scott and their two adopted children, Nate and Serena Grogan, and son Zack Grogan; Sister Barbara Lopez and husband Dave Lopez, a retired businessman of California and their children, Jason Lopez and wife Alysia Lopez of California and Monique Charron and husband Sheldon Charron of California and numerous friends and other relatives.

Online condolences may be sent on behalf of the family to www.McCulloughRaiguel.com