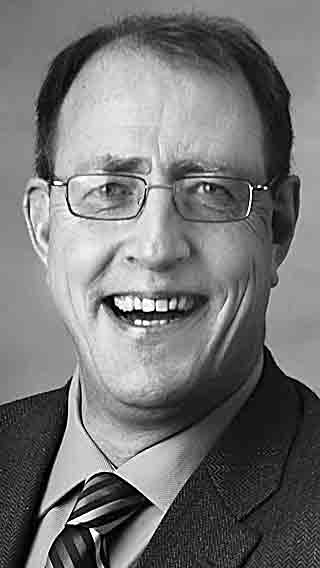 Born July 14, 1954, in McCook, Nebraska, with cerebral palsy, Jerry never let disability define him. He met all challenges with acceptance, a “can-do” spirit and a cheerful smile.

He graduated from Pueblo South High and earned a bachelor’s degree from Western State College in Colorado. He later lived in Parkersburg, then in Ohio, New Jersey and Arizona.

After working briefly for the U.S. Treasury Department, Jerry began a full-time career as a speaker and writer. His book, Living CAREfully: The Importance of Caring in a Life of Significance, was published in 2005.

His life was testimony to the natural optimism, determination and persistence he invoked during his 1985 Trail of New Beginnings transcontinental run, when he tallied 3,528 miles on crutches in just over seven months.

Jerry inspired people of all ages and abilities. He credited his success to those who didn’t see crutches when they looked at him; instead, they saw a unique individual with potential.

Jerry went on to run 35 full-length marathons, and up Pike’s Peak three times. He was interviewed on the Larry King Radio Show and featured on Paul Harvey’s The Rest of the Story. In The American Character, Dr. Norman Vincent Peale deemed him “a motivational do-er.”

Despite such acclaim, Jerry ultimately placed little emphasis on athletic feats. He viewed his greatest accomplishment as validating others. His message was not about overcoming cerebral palsy, but about harnessing our individual gifts to live lives of purpose, service and love.

His own special gifts reached perhaps their highest fulfillment with his most consistent and beloved audience, Rotary Youth Leadership Awards (RYLA) participants throughout the country.

Jerry is survived by his daughter, Sarah Traylor; sisters Janet Traylor (Bill), Judy Antonioni (Byron) and Debra Traylor; niece Karla Antonioni Thielbar and nephew Ryan Antonioni and their families; and family and friends around the world. His parents, Tom Traylor and Marilyn (Wagner) Traylor and his brother-in-law, Bill Dunphy, preceded him in death.

Jerry cared little for possessions and greatly for people. His spirit will live on in those with whom he shared his caring heart, his irrepressible optimism and his radiant joy in life.