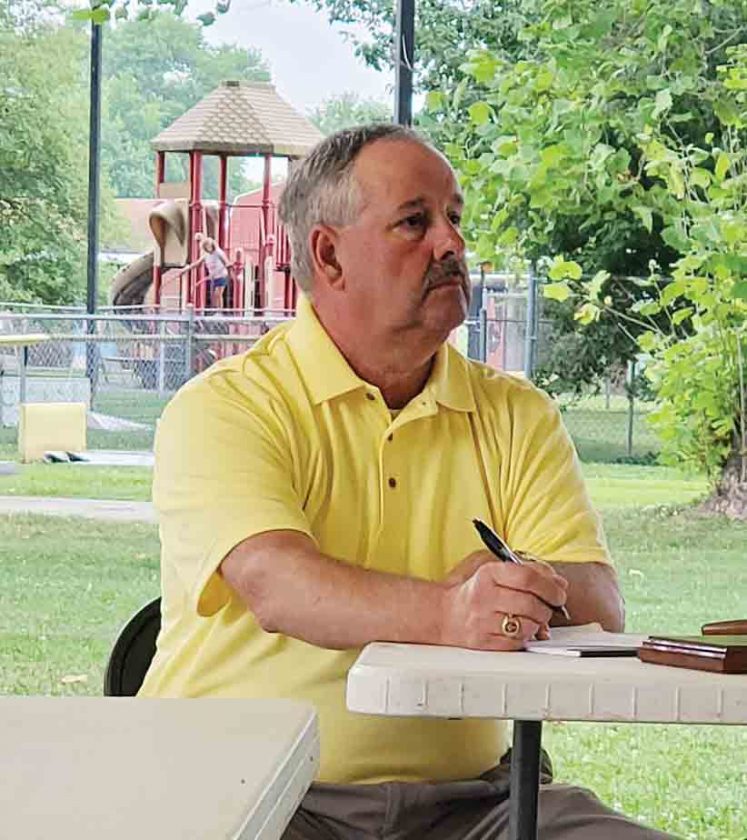 Paul Jordan was sworn in as mayor of Williamstown at Tuesday's city council meeting. (Photo by Madeline Scarborough)

WILLIAMSTOWN — Paul Jordan officially took office July 1, and Tuesday night was able to participate in his first city council meeting as mayor of Williamstown following being sworn in.

The meeting was held at the Tomlinson Park picnic shelter closest to the city building in order to maintain social distance.

According to Stephanie Stengle, the city clerk, the city has reserved the picnic shelter for the next three months for use while social distancing requirements are still in place.

The meeting itself was brief with the only agenda item being the swearing in of Jordan, but several other items were addressed during council comments. According to council member Barbara Lewis, the city has been working on replacing the picnic table at Fenton Park with two new picnic tables, because the old one is in bad shape.

“I have noticed people still going to the park trying to utilize it,” Lewis said.

The park picnic table isn’t the only update the city is working on, they are also updating their server system, which is 10 years old.

According to Stengle, the update will allow for the city to accept online payments and credit card payments for city utilities and services. The system update will cost around $13,050, which includes system set up, training and a five-year warranty. This will save the city $7,200 over all and is reimbursable through the CARES Act, because the online system will help keep citizens safer during the virus outbreak.

Other announcements at council:

The annual Williamstown Volunteer Fire Department Ice Cream Social has been canceled due to coronavirus concerns.

An ongoing issue in Williamstown is how to handle feral cats and the damage they cause to properties. An ordinance has been drafted by city attorney Blaine Myers and will be presented for council approval at an upcoming meeting.