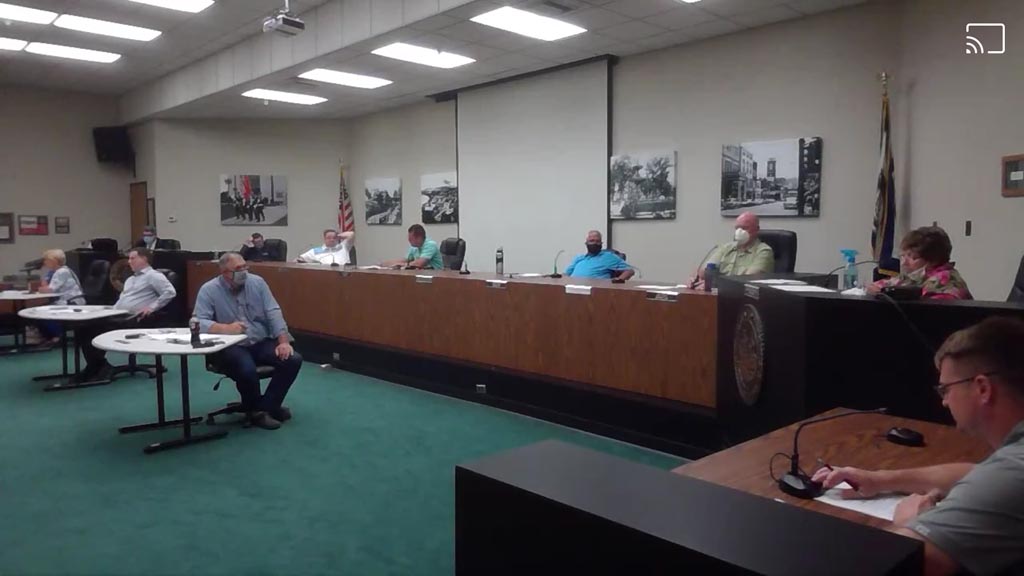 Parkersburg City Council returned to its chambers Tuesday, practicing social-distancing measures as shown in this screen shot from the stream of the meeting on Facebook Live.

PARKERSBURG – The full City Council met in its chambers Tuesday for the first time in more than a month, approving the final reading of a $500 B&O tax exemption to assist businesses dealing with the fallout of the COVID-19 pandemic.

At the next meeting, the public can join them.

Council voted unanimously to rescind a resolution, passed during a special meeting on May 15, that prohibited in-person attendance by members of the public during West Virginia Gov. Jim Justice’s declared state of emergency over the pandemic. Meetings were streamed online, and members of the public were asked to submit their comments via email or phone to City Clerk Connie Shaffer.

Fourteen people did so in advance of Tuesday’s meeting, most of them expressing opposition to the limitations on the public forum.

“We should be able to look our councilpersons in the eye and have them view us in the same manner,” Shaffer read from an email sent by Parkersburg resident Sue Ellen Waybright. “Our voices are being stifled, and since this is the third time that this council has voted to limit our ability to address council as a whole, it cannot be attributed just to this pandemic.”

Council has amended the public forum format a couple of times over the last few years, starting when large crowds turned out in support of and opposition to a proposed nondiscrimination ordinance that was eventually rejected in 2017.

Waybright and others said they believed the public forum could be conducted in person while maintaining social distancing and other practices to prevent the spread of the novel coronavirus. Some pointed out that Vienna City Council has allowed public attendance and a forum in a smaller venue than Parkersburg’s council chambers.

Council was required to have an in-person public hearing at its April 21 meeting when it laid the levy. Although no one spoke at that time, one Parkersburg resident addressed them in the public forum via a microphone set up in the executive conference room.

Councilwoman Sharon Kuhl said Tuesday she had trouble hearing the speaker, which was why she voted in favor of the resolution last month.

Councilman John Reed made a motion to retract the amendment and bring back the public forum with social-distancing guidelines established by the administration. Since it involved a council rule, he said, they did not need to wait and place it on the agenda for the next meeting.

“Plus, I don’t think anybody from the public is going to argue with me,” Reed added.

After the meeting, Reed said a clarification from the governor’s office that public buildings were not subject to the same occupancy guidelines as retail establishments made allowing the public back into chambers more feasible.

“If Connie’s going to sit there and read the emails from them, we might as well have them in the council chambers to do it themselves,” he said.

Council voted 8-0 to approve the business and occupation tax exemption on final reading, with Councilman J.R. Carpenter recusing himself because he owns a restaurant downtown.

The measure will apply to restaurants, retail establishments, service businesses and those renting or leasing real property. It’s expected to leave nearly 1,500 small businesses in the city with no B&O tax liability for the fourth quarter, which ends June 30, city officials have said.

Mayor Tom Joyce told council the city applied for its own financial assistance with the coronavirus impact by seeking a share of the $1.25 billion the state received from the federal C.A.R.E.S. Act. The application included not only reimbursement for supplies and materials, but also payroll expenses for time spent by employees preparing for or responding to the pandemic.

“All of our COVID-related payroll expenses were summarily rejected from the first round of funding,” Joyce said.

After the meeting, the mayor said the state claims payroll “is not reimbursable under the current guidelines.”

“That’s going to lead to some very difficult choices for, I suspect, all cities but especially the City of Parkersburg,” he said.

Joyce said he plans to continue working with West Virginia’s Congressional delegation and state officials on the matter.

Joyce said he was pleased with the outcome of a peaceful demonstration in the city Sunday over the death of George Floyd while in police custody in Minnesota. He thanked city police and other area law enforcement agencies for their assistance, as well as the protesters for their behavior.

“They were extremely peaceful, no aggression,” Joyce said. “I was confident that that would be the case, quite frankly, and I was just pleased beyond measure when that came to fruition.”

He said law enforcement was preparing for an announced demonstration at the Municipal Building today as well, although the organizer had taken down the Facebook page for it as of Tuesday afternoon.

“We welcome peaceful, non-aggressive protests and/or demonstrations, which is what we saw Sunday,” Joyce said after the meeting. However, he said city police will make sure citizens and their property are protected.