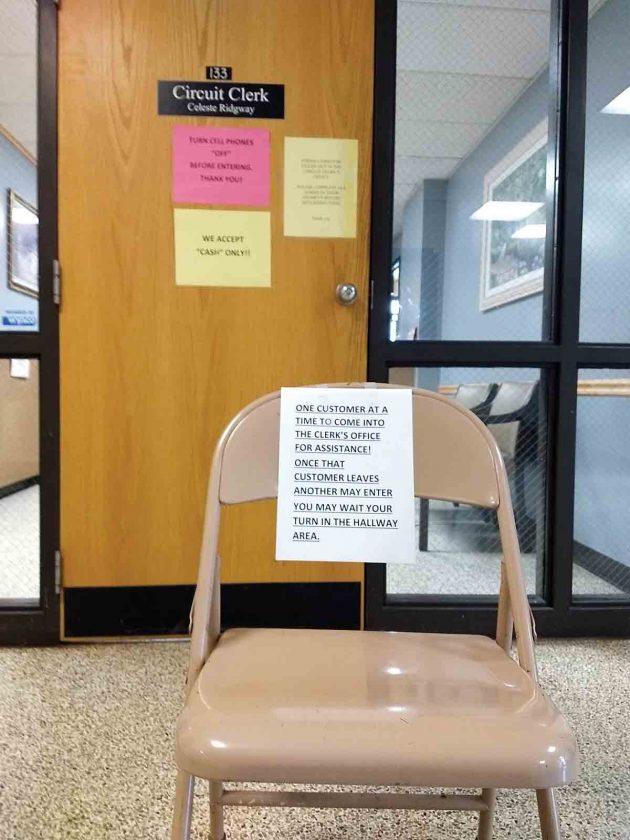 The Wood County Circuit Clerk's office saw customers one at a time to limit contact to curb the spread of the COVID-19 coronavirus. (Photo by Evan Bevins)

PARKERSBURG — The Wood County Courthouse was closed Wednesday to public traffic due to concerns with the COVID-19 coronavirus.

In an emergency meeting, the county commission unanimously voted to close the courthouse and the Black Annex as the first case of COVID-19 was confirmed in Wood County on Tuesday.

County offices will still be staffed and people can conduct business over the telephone, by e-mail or through traditional mail service, county officials said. If something requires someone to have to come in, they can call the respective office and make an appointment, they added.

This is being done to limit face to face contact with county employees.

“If necessary, they can call the respective office and make an appointment or resolve the issue over the phone,” Commission President Blair Couch said.

The courts, the circuit clerk’s office and the prosecutor’s office are remaining open to continue their work on court cases, but precautions are being taken at each to limit possible exposure as people still have to come in those offices and the courts. The Wood County Day Report Center is also operating on an appointment schedule.

Couch outlined that around 29 other counties across the state have closed their courthouses to public traffic, adopting measures to limit face to face contact. Some had people able to make appointments to handle probate issues and other concerns.

“The common theme through 25 is ‘we’re closed to public foot traffic, but offices are answering phones, e-mails and mail,” Couch said. “The other nine counties are doing appointments.”

The County Clerk’s Office still has to deal with probate issues. Officials said people could drive up, call in and someone would come out get the necessary paperwork, run it in and get it processed and bring out a receipt so people don’t have come into the building.

“The foot traffic into the courthouse has slowed way down,” he said.

The county is expected to have thermometer guns soon to be able to check temperatures at the door.

Couch said the Governor’s stay at home order, issued this week, did not require a lot of business in the counties to be conducted during this time.

Lefebure said with what was outlined in the order, there should not be any foot traffic at the courthouse.

“The business of the courts does continue,” Couch said of domestic violence cases and other matters.

County officials said they plan to sign the lease today on the proposed drive through facility on Dudley Avenue. The facility, which is expected to take two weeks to set up, would be able to conduct various county functions utilizing the former banking facility’s drive through lanes so people do not have to get out of their cars.

“If this thing goes long, people will want to be able to do certain things,” Couch said of the COVID-19 pandemic.

Seufer said certain people have keycards and have been coming in the courthouse to conduct business at all hours. He recommended those be turned off and the people who use them to call in and make an appointment in order to limit who has access to the courthouse and various records as officials are trying to maintain regular cleanings of the facility.

“I think they need to make an appointment,” Couch said. “Call in and make arrangements.”

People are staying home as the foot traffic has already dropped significantly.

Even as the pandemic has limited people’s movements, the county still has to prepare for the upcoming elections with the primary set for May 12.

Earlier this month, the commission approved the list for 320 poll workers with 136 Democrats and 184 Republicans. The list includes alternates. Letters were sent out to inform these people they have been approved and they had 30 days to respond to accept or decline the offer, officials said.

Rhodes said Wednesday he has only heard back from around half. Of those he heard from, some are not planning to work while the others want to wait and see what happens as the election approaches.

He said they may have to consolidate precincts on a short-term notice.

“That is not a good option,” he said. “The absentee ballot is our best option.

“If anyone wants an absentee ballot, please call our office.”

Rhodes has been in contact with the Secretary of State’s Office on guidance on how to best move forward with the election. The County Clerk’s office is considered essential because of the elections, Rhodes said.

“Their guidance is we have to insure that everyone who wants to vote can vote,” he said. “That is what we are going to do.”

Right now the state is not looking at a total mail out for the election as other states who have tried it faced many problems due to the short notice of trying to put it together.

Couch said they could do five precincts in a worst case scenario.

The Circuit Clerk’s Office is only letting one person in at a time, attorneys and others who have immediate business in there. They are doing telearraignments and people on bond can only be in their office accompanied by their attorney.

The Wood County Magistrate Court is down to one Magistrate and one clerk a day, court officials said. They are handling emergency situations only. People wanting to handle tickets or file civil suits are being asked to come back at another time or find an alternate way of handling it, personnel said.

Nohe is running with a minimum staff.

“I think it would be better if we could shut down,” he said of health official warnings about people needing to stay home and not move around so much.

The Wood County 911 Center and the Wood County Sheriff’s Department have to remain operational. Stephens said deputies are answering calls and having deputies conduct talks outside of residences to avoid exposure.

The commission is encouraging people to process their tax payments via mail, online banking or an online credit card transaction.

The closure is effective immediately and signage will be going up to alert people.

“We are doing what we can and we hope other businesses will follow this example,” Couch said.

Officials said the situation remains very fluid and things can change quickly. Additional measures and safeguards may need to be considered, they said.

People can check the county’s website at www.woodcountywv.com for further updates.