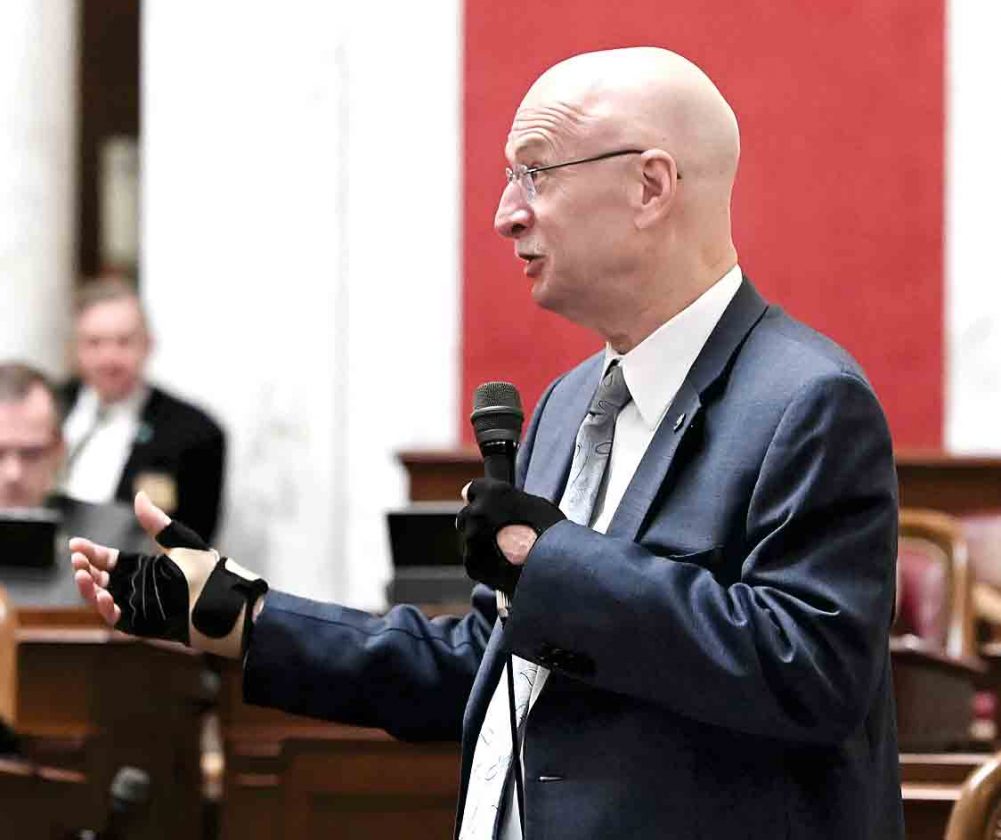 CHARLESTON — The West Virginia Senate passed a budget for fiscal year 2021 on Saturday morning that included several amendments, including restoring recommended funding to the intellectual and developmentally disabled waiver program and including funding to help prepare the state for the Coronavirus.

Senate Bill 150, Gov. Jim Justice’s budget bill, passed the Senate 28-1 with five members absent. The lone nay vote came from state Sen. Eric Tarr, R-Putnam. The bill now heads to the House of Delegates, which had its own version of the budget — House Bill 4021 — on first reading Saturday.

The Senate’s proposed budget is $4.558 billion, $27 million less than the $4.585 billion general revenue budget proposed by Justice during his Jan. 8 State of the State address.

The general revenue budget is just one part of the state’s $13.7. billion total budget, which includes the State Road Fund, the Special Revenue Fund, and the Lottery and Excess Lottery funds.

The Senate budget includes more than $38 million in cuts to Justice’s budget, including a $10.5 million cut to the Jobs and Hope Program for substance abuse treatment and job training, a $3 million cut to the West Virginia Invests community and technical college grant program created by Senate Bill 1 last year, and a $4 million cut to the Department of Commerce for the Division of Tourism.

Improvements to the budget bill due to bills the Senate passed since the start of session total $11.5 million, including $7.7 million for the intermediate court of appeals as created in Senate Bill 275, and $3.4 million for judicial and magistrate pay raises.

The final part of Blair’s amendment returned $10 million cut from the intellectual and developmentally disabled waiver program earlier this week. Justice recommended a $19.8 million increase to $108.5 million to end the wait list for the I/DD waiver program. The Senate Finance Committee reduced the funding to $98.5 million. More than 1,000 families remain on the waitlist, which provides funds to allow families to care for their loved ones at home.

“I too, and I believe all of us in here, support increasing the I/DD waiver to a greater degree and being able to take care of those who are in need in the State of West Virginia,” Blair said.

“I really appreciate the leadership’s reconsideration of this issue,” said state Sen. Richard Lindsay, D-Kanawha, “This affects a number of families throughout West Virginia, families that deal with a substantial diagnosis … it’s a good day here in this body and a good day in this Capitol to come through on those promises.”

An amendment from state Sen. Ron Stollings, D-Boone, moves $2 million from medical services line item in Division of Human Resources Department of Health and Human Resources budget to the Governor’s Civil Contingency Fund to create a Public Health Emergency Response Fund to prepare for the Coronavirus.

“These are extraordinary times,” said Stollings, a Democratic candidate for governor and a doctor. “I’ve been told that this funding will be used in the planning, education, and messaging. It will make a difference and our response will be more robust that it would have been. It will result in better and faster communications and education and help get out in front of this.”

“We’re going to face these issues more often than we really want,” said Senate Majority Leader Tom Takubo, R-Kanawha, who is also a physician. “When people do travel through our mountains and bring those viruses in here, we have to act, and we have to act quickly … we have to have the money and funds to quickly message this.”

The final amendment adopted by the Senate and sponsored by state Sen. Stephen Baldwin, D-Greenbrier, increases the line item for sexual assault intervention and prevention in the DHHR Division of Health budget from $125,000 to $250,000.

“It’s $125,000 that’s going to have a huge impact on their ability to help people in times of crisis,” Baldwin said. “It’s my understanding that calls to rape crisis hotlines have increased 159 percent over the past two year, so this is a serious issue. I appreciate the body’s consideration of this.”

The Senate Finance Committee’s version of the budget earlier last week included $14 million in unappropriated funds. With all the changes to the budget and the amendments that were adopted Saturday, the unappropriated amount dropped to $666,854.

Also, there are still bills moving that could lower or increase the Senate and House budget bills. The Senate has yet to take up House Bill 4092, the foster parent and foster child bill of rights, which includes nearly $17 million for increasing reimbursement rates for placement agencies, foster parents, and kinship families. Senate Bill 275, creating an intermediate court of appeals, was amended by the House Judiciary Committee Friday pushing back the start date of the court until Jan. 1, 2023, meaning the bill would have no fiscal impact to the 2021 budget.

“My question is whether we should allocate $7.7 million in this 2021 budget and again in the 2022 budget when this could won’t even open until 2023 or if perhaps there is a better use for these dollars right now,” asked state Sen. William Ihlenfeld, D-Ohio. “I know we have pressing needs and I just wonder if we could use that money for another purpose.”

“The Senate budget has to take into account the bills we pass out here,” Blair said. “If changes get made, then the budget process with the House will address that accordingly, so that would free that up if (the bill) stays in its current position.”