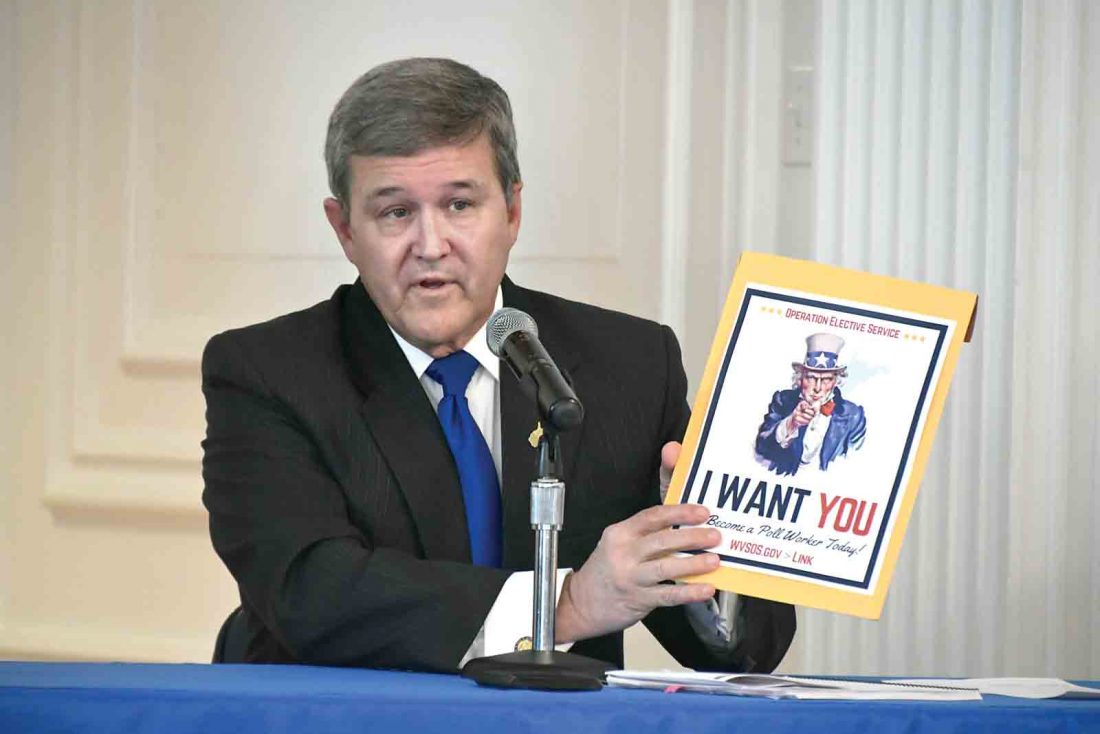 Secretary of State Mac Warner briefs the press about plans to mail absentee ballot applications to all registered voters. (Photo courtesy of the WV Governor’s Office)

CHARLESTON — The May primary in West Virginia is still on, but while county and state election officials work to get absentee ballot applications in the hands of registered voters, those wishing to replace Gov. Jim Justice in November are finding new ways to make their case to voters.

On Friday, Secretary of State Mac Warner announced that all registered voters in the state would receive an application for an absentee ballot.

“We’ve got a good plan and we’re vigorously executing that plan,” Warner said Friday during a virtual coronavirus briefing at the State Capitol Building in Charleston.

Last week, the Secretary of State’s Office submitted an emergency rule allowing voters to request an absentee ballot from their local county clerk using the coronavirus crisis as a valid excuse. But Monday, Justice issued an executive order for all state residents to stay at home indefinitely except for food and supplies, medical care, travel to essential jobs, and outdoor activity.

“The basis of our democratic form of government is a voter casting a ballot,” Warner said. “Given the coronavirus situation, things might be cleared up in May or they may not, but if you have concerns about the coronavirus, every voter in this state is eligible to vote an absentee ballot.”

Warner stressed that the public will need to be patient when votes are tallied on Election Day, anticipating that the increase in absentee ballots will take time to tally by hand. Warner said a typical election would involve 9,000 poll workers and county employees for the state’s 1,723 polling locations across all 55 counties. He expects more staff will be needed to help with the influx of absentee ballots.

Also, the last day to register to vote in the May 12 primary or update voter registration information is Tuesday, April 12. Early voting will continue Wednesday, April 29, to Saturday, May 9. Polls will be open on Tuesday, May 12, for the primary election.

Warner announced Operation: Elective Service on Friday, asking for people younger than 60 and in good health to apply to county clerks to become poll workers.

Poll worker positions are paid positions, with workers being paid for a one-day training seminar and for work on Election Day. Pay ranges by county between $175 to $240 per person. Interested persons can go to wvsos.gov to sign up and be connected with a county clerk where they live.

While other states have postponed their primary elections, West Virginia has no plans to do the same with the May primary more than five weeks away. That means that candidates for office must find different ways to reach voters. No more door-to-door, no parades, and no town halls.

Nowhere is this more evident than the race for governor, a crown that will lie heavier on the head of the next person to wear it as the state reels from the coronavirus crisis that has swept over the world.

Justice — a candidate for reelection in the May Republican primary for a second term as governor — hasn’t had much time for campaigning, either in-person or virtually.

Almost every day since March 12, Justice has been holding briefings with the public through video livestreams and even virtual press conferences where reporters ask questions through video teleconference system. Justice, along with state health officials, has talked with President Donald Trump to impress on him the need for additional supplies and resources.

“Governor Justice’s top priority is protecting the people of West Virginia from novel coronavirus (COVID-19) and stopping its spread,” said Roman Stauffer, campaign manager for the Justice campaign. “He is leading the state’s effort every day, and that is his top priority. Our campaign was the first to announce a suspension of all campaign gatherings, events, and fundraisers to prevent the spread of COVID-19.”

Despite being focused on coronavirus response, the Justice campaign did release its first TV campaign ad since last year. The ad started this week — a day after the state reported its first COVID-19 case — and focused on Justice’s relationship to Trump.

Woody Thrasher, a Republican opponent of Justice’s and his former Commerce Department secretary, also has a TV ad on air. Thrasher’s ad focuses on the coronavirus and offers ideas, including increasing unemployment benefits, bridge loans for small businesses, and deferment of mortgage payments.

“This is a real time of concern. We’re all dealing with this coronavirus. It’s certainly creating hardships for West Virginians, and I believe those hardships might get greater before they get better,” Thrasher said in the ad. “I also think it’s a time where West Virginia needs to be proactive in terms of its reaction to this crisis, not reactive the way we have been so many other times.”

Thrasher has also been using social media to connect with voters virtually, including using Facebook video to do virtual meet-and-greets. On Thursday, Thrasher posted a video tour of his home and farm in Harrison County.

“Because of this coronavirus, we’re not able to do our meet-and-greets, so what we’re trying to do is introduce me to folks across West Virginia,” Thrasher said. “What better way than to introduce my two dogs and the youngest of my three sons … I thought I’d show you the home I live in.”

On the Democratic primary side, candidates are also using social media to great effect. Stephen Smith has always been hands-on, giving out his own personal phone number and engaging his grassroots supporters with in-person meet-and-greets. Smith has even cooked meals in people’s homes to introduce himself to potential voters.

Since COVID-19, Smith has used Facebook and Twitter to keep his supporters motivated, to unveil his own ideas and plans to help the state through the coronavirus, and to introduce himself to people on the fence. On March 22, Smith did a live broadcast on Facebook the day after Justice did a statewide address

“As West Virginians, we come to this moment in every possible way,” Smith said. “It’s only because we as West Virginians — not because of one politician or one person — all of us are coming together. That is our only shot at this moment. That’s the only thing that’s been the answer to our problems.”

State Sen. Ron Stollings of Boone County has also used social media to not only campaign but give sound medical advice. A physician in Madison, Stollings has used Facebook to give updates on the coronavirus and answer questions from viewers.

“We’re up against it, folks,” Stollings said in a video Thursday. “We really need to listen to our public health experts and we really need to beef up the system. I’m not running for governor for fame or glory, I assure you. I think I’m the best person. During this time of health care issues with this pandemic … I can get things done.”

Both Stollings and Smith faced off March 24 against Kanawha County Commissioner Ben Salango in a televised debate on WVVA, a TV station in southern West Virginia. Salango is one of three county commissioners dealing with coronavirus in Kanawha County, which is up to 15 cases and saw the shutdown of its judicial annex after several employees were infected. Salango has been endorsed by 11 labor unions, including the AFL-CIO, the West Virginia School Service Personnel Association, and the Teamsters.