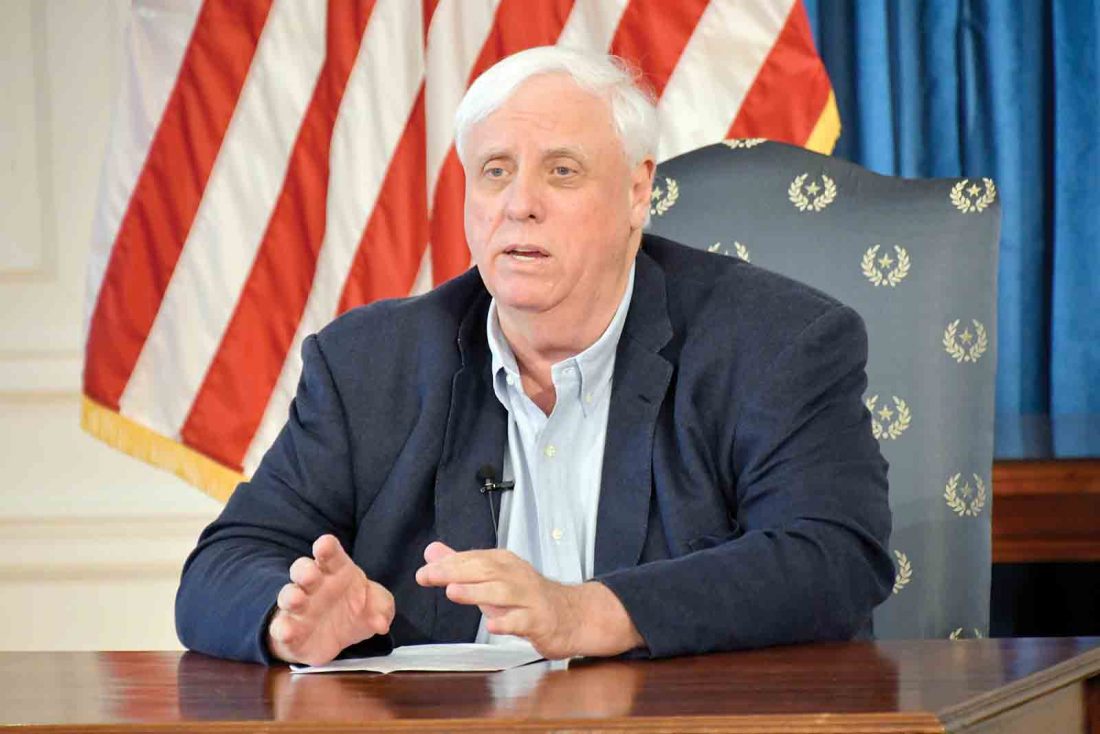 CHARLESTON — Hours before a stay-home order and the closure on non-essential businesses took effect Tuesday evening, Gov. Jim Justice briefed the press and public on the latest on the state’s coronavirus response.

Wood County has now joined the list of counties with confirmed cases of COVID-19.

According to the West Virginia Department of Health and Human Resources, West Virginia had 39 positive coronavirus cases as of Tuesday night with 759 negative cases. These include new cases in Berkeley, Harrison, Preston, and Wood counties.

According to Johns Hopkins University, there were 53,660 confirmed coronavirus cases as of Tuesday night with 696 deaths. Worldwide, there were 417,698 positive cases with 18,612 deaths.

Justice was joined by state officials Tuesday afternoon in a virtual briefing from the Governor’s Reception Room at the State Capitol Building in Charleston.

The West Virginia National Guard is working to help with logistics and delivery of food and medical supplies across the state. This includes working with food banks to make sure they have food and helping deliver that food to seniors and those in need; and delivering N-95 masks and other personal protective equipment to hospitals and health departments.

“This is a public health emergency that our nation and state has not seen before,” said Adj. Gen. James Hoyer. “The effort needs to be put into place to help our public health officials be able to operationalize activities for a major public health event like this.”

The National Guard also created a consolidated supply center to help coordinate the delivery of medical supplies across the state. The state has purchased extra surgical masks and personal protective equipment using the Civil Contingency Fund.

“As far as our purchases … we’ve formed a strike force that is working on it around the clock,” Justice said. “I’m happy there are shipments that are going out right now because stuff has come in.”

Justice was pleased to hear that pharmaceutical manufacturer Mylan was restarting production of the anti-malaria drug chloroquine phosphate at its Morgantown facility. Chloroquine phosphate and a similar drug, hydroxychloroquine, have been promoted by President Donald Trump as possible treatment for coronavirus, though the Food and Drug Administration has not approved their use for that yet.

“We’ve found that it may be one of the drugs that gives us a breakthrough as far as stopping this dreadful disease,” Justice said. “We should all be really proud of Mylan. They’re now the first to be manufacturing this product and they’re right here in West Virginia.”

The University of Minnesota is conducting a clinical trial with the drug now, but a form of the drug used as an additive in saltwater fish tanks caused the death of an Arizona man and hospitalized his wife according to CNN. Both said they took the additive because Trump said the drug could work against COVID-19.

Justice also announced a virtual day of prayer for today starting at noon with religious leaders of multiple faiths. A live broadcast of the event can be found at governor.wv.gov.

The governor announced an executive order Monday requiring the public to stay home with exceptions for buying groceries and supplies, receiving health care, going to work at essential businesses, and outdoor activities.

“We’re processing those claims with light speed,” Justice said. “We’re trying to get all the red tape and all the regulations out of the way to immediately get funds to our people. I’m really pleased with all of those trying to get that done.”

Abraham said the state has received no guidance from the Trump administration regarding reporting unemployment compensation application numbers. According to The New York Times, the U.S. Department of Labor asked states last week to not release information about unemployment claims before the regular national report on Thursday.

“Workforce West Virginia has not made us aware that they’ve received a similar request,” Abraham said.

“If you are waiting test results or you are thinking you might have this, you want to treat it as if you do,” said Dr. Cathy Slemp, state health officer and commissioner of the Bureau of Public Health.