Crews remove graffiti as they close public facilities at parks 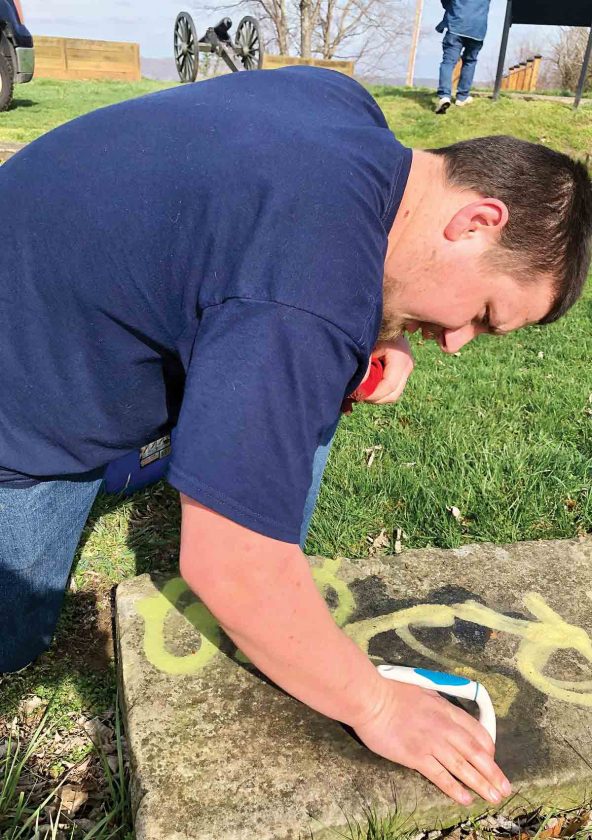 Bryan Hopkins, with the Wood County maintenance department, scrubs graffiti off one of the powder magazine foundation stones at Fort Boreman Park on Tuesday. (Photo by Christina Myer)

PARKERSBURG — Wood County Maintenance Department workers began trying to clean up graffiti at Fort Boreman Park on Tuesday morning, even as they were also preparing the county’s parks for Gov. Jim Justice’s order that their public facilities — such as playgrounds and restrooms — be closed.

According to Wood County Parks Director Jeremy Cross, the graffiti — including obscenities and a racial slur — was discovered by a visitor to the park.

“We get regular users,” Cross said. “We have a guy that walks every day and he found it and filed the (police) report.”

There is a camera system at the park, and the tape is being reviewed. Parkersburg Police Department is handling the investigation, Cross said.

Parkersburg Police Chief Joe Martin said officers responded Sunday to the park after someone had reported the vandalism. 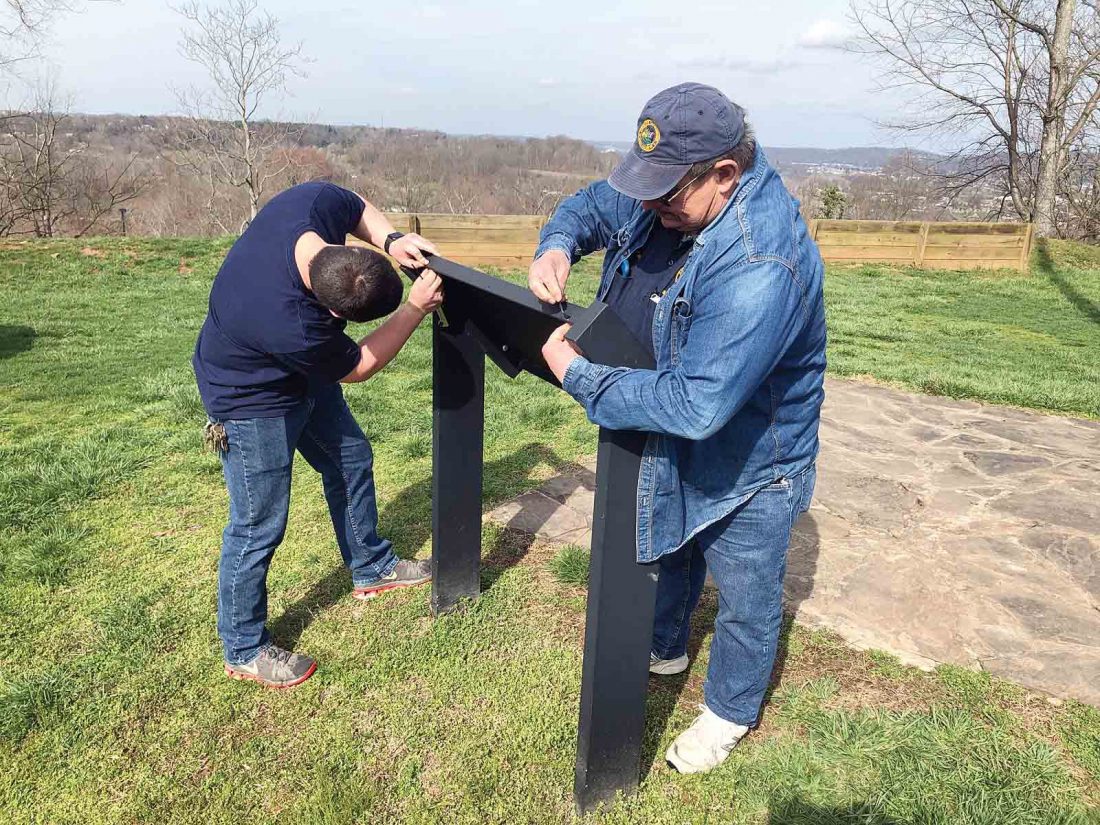 Bryan Hopkins, left, and Wood County Maintenance Supervisor Melvin Swiger begin to take apart one of the informational signs at Fort Boreman Park on Tuesday. Graffiti spray painted onto the plastic shield for the sign will be removed. (Photo by Christina Myer)

“It looks like it was just some random juvenile shenanigans,” he said.

Witnesses reported four juveniles were seen in the area the day before, driving a red Mercedes SUV and possibly smoking marijuana.

“We did locate some evidence and we are processing it now,” Martin said.

People with any information about who these people might be or information on the crime are asked to call Detective Mike Brown at the Parkersburg Police Department at 304-424-8444.

Graffiti was sprayed onto the grass, signs, a park bench and the sandstone foundation blocks of what had been Fort Boreman’s powder magazine. 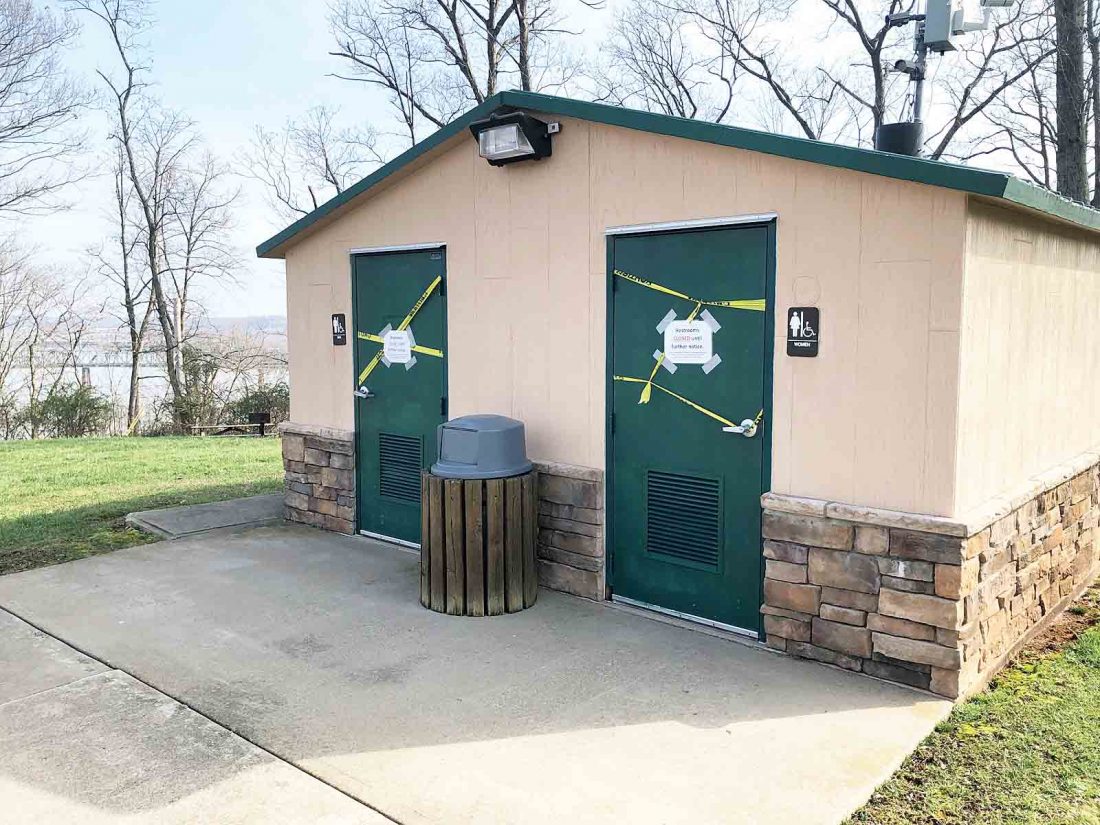 As is the case at all Wood County parks, public restrooms are now closed at Fort Boreman Park. Wood County Parks Director Jeremy Cross said Tuesday the county is following Gov. Jim Justice’s order, and using the same guidelines that were given to state parks. Restrooms and playgrounds are closed, but there are still many outdoor recreation options available. (Photo by Christina Myer)

The foundation blocks are of greater concern because they are irreplaceable, and the sandstone would be easy to damage in the graffiti-removal process. Workers may have to turn over the stones, if other methods prove too harsh.

As workers were discussing the best way to clean up the graffiti, Cross said “We take pride in these parks, and to deal with the graffiti and vandalism … it’s a hard thing,” particularly as Justice’s order already meant some extra work for the day.

Cross reminded the public it is possible to stick to social distancing orders while still taking advantage of most of what the parks have to offer — if you plan ahead. For example, there will be no public restrooms open.

The ATV trails and campground at Mountwood Park are closed, too.

“But the lake (at Mountwood Park) is still open for fishing,” Cross said. “I saw 50 to 75 cars in the parking lot over the weekend.”

Mountwood Park in particular is so large and has enough trails, it should be easy for visitors to enjoy outdoor activities without getting too close.

“You don’t have to follow the six foot rule,” Cross said. “Make it 20 feet. Take that physical and social distancing and make it greater. You shouldn’t even be able to see another person.”

Cross said last week there were plenty of visitors to Fort Boreman Park, “but there were 17 cars in the parking lot at 1 o’clock on a Friday and I didn’t see another person. It’s open air.”

“It’s exciting about the parks,” Cross said. “It’s spring and people are wanting to get out and about. They still can.”