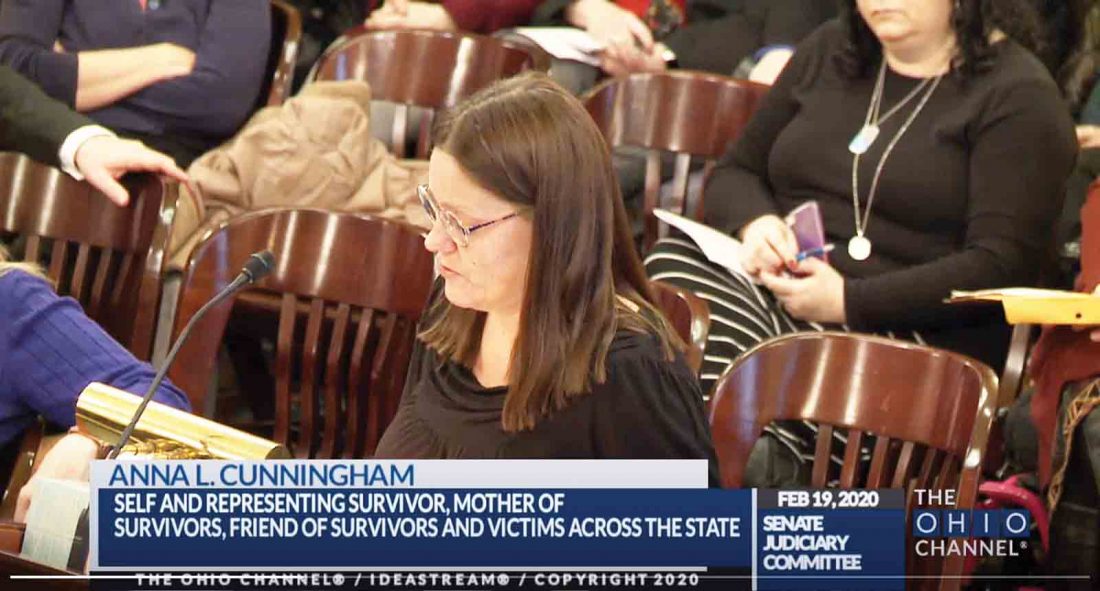 Anna L. Cunningham of Washington County testifies before the Ohio Senate Judiciary Committee on Wednesday about Senate Bill 162 to eliminate the statute of limitation in rape cases and the marital rape exemption. (Photo Provided)

COLUMBUS — A Washington County woman and her daughter testified Wednesday in support of a bill eliminating the statute of limitations on rape and the marital rape exemption in Ohio.

Anna L. Cunningham, 41, and her daughter, Hazel Nicole, 23, appeared before the Ohio Senate Judiciary Committee in a hearing on Senate Bill 162. The bill would eliminate the statute of limitations in rape cases and the provision in state laws that exempts a spouse from being charged with rape.

“This Senate Bill 162 is a very important bill,” Cunningham said.

The statute of limitations for rape in Ohio is 25 years, with another five years if DNA evidence is available.

“More times than not, sexual abuse survivors recant their stories out of fear of the perpetrator or out of fear that harm will come to their family or loved ones, among many other reasons,” she said.

The Judiciary Committee on Wednesday, which held its second hearing on the legislation, heard testimony on SB 162 from numerous advocates, prosecutors and victims who told “horrific stories” of their experiences, Cunningham said. Their assailants continue to walk the streets, she said.

“In April 2016, I was suicidal and checked into a behavioral health clinic. I took my KJV Holy Bible with me and while I was in the center for a week, I read the entire Book of Psalms and fasted and prayed, and asked the Lord to help me talk about the sexual abuse I had been suffering from for so many years,” Nicole told the committee.

Cunningham, who said she and her daughter were asked to testify by Sen. Nickie Antonio of Cleveland, a sponsor of the bill, discussed the events of her life and the stories of her friends who had similar experiences.

She asked the committee to support the bill.

She has organized several local rallies in support of victims and increasing awareness of sexual and domestic assault and has participated in panel discussions at the U.S. Capitol. Someone who has been harmed can contact Eve Inc. in Marietta or the Family Crisis Intervention Center in Parkersburg, Cunningham said.

She has empathy for victims and is a passionate advocate for their cause.

“It’s a heavy weight upon my heart,” she said.