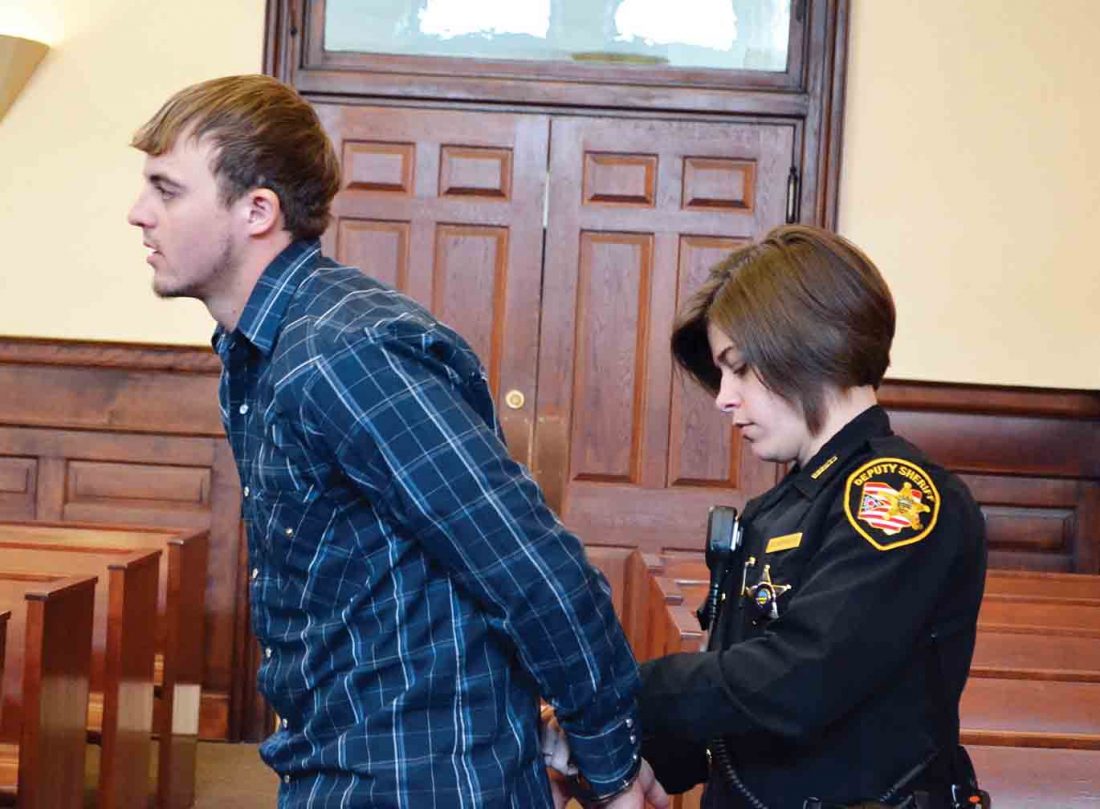 MARIETTA — After pleading guilty in January to tampering with evidence, Wyatt Barth was sentenced to 60 days in jail Thursday morning in Washington County Common Pleas Court.

Barth, 22, of 4685 County Road 9, pleaded guilty to the third-degree felony after being arrested in March 2019 for domestic violence, aggravated menacing, tampering with evidence and improper handling of a firearm in a motor vehicle.

“It was an argument with his now-wife over infidelity,” said Washington County Assistant Prosecutor David Silwani.

In March 2019, a deputy from the Washington County Sheriff’s Office responded to a domestic incident at Barth’s residence. He and his then-girlfriend were involved in a verbal argument. He reportedly got into his truck, and while driving past his girlfriend and his mother, pointed a revolver out of the window and shot it as he drove away.

“The argument between the defendant and his now-wife over issues of infidelity and what transpired was an inappropriate action to anger,” Silwani said. “There were multiple variations of what happened, but the fact remains that the defendant was in a car, fired a gun and then drove off. He hid the gun and bullets after being texted by his mother that the police were there looking for him to talk to about this incident.”

Barth admitted to deputies that he hid the gun and threw the ammunition out the window.

Silwani said the state was asking for a year in prison. He said the concern of the state was that although people get angry, there are healthy ways of dealing with anger.

“Firing off into the woods, or at her, depending on what set of facts you look at, regardless, that is an inappropriate way to deal with anger,” he said. “The fact remains that, despite all that, he consciously threw the bullets out of the window and hid the gun after he was told the police were there. It shows that this was not a healthy way to handle it.”

Barth’s attorney, William Summers, said Barth shouldn’t go to prison as the victim didn’t file any charges against his client.

“When you look at the need for incapacitation, Mr. Barth is the kind of person that’s the backbone of Southeastern Ohio, and West Virginia where I was born,” Summers said, noting Barth has two jobs and appears to be a hard working man.

“I don’t think he’s the type of person to be incapacitated or even rehabilitated,” he added. “This was an aberration in terms of what his typical behavior has been. It was a situation where he got overly angry over what had gone on that day…arguing and going back and forth with his then-girlfriend, then reacting inappropriately.”

He said he believes Barth has learned his lesson.

“He’s not demeaning the seriousness of his conduct. He understands and admitted to what he did. He admitted hiding the gun,” Summers said. “So, he understands now that it’s not something you should be doing.”

The defense attorney noted Barth has no prior history other than traffic violations. He then asked the court to err on the lighter side of sentencing, as Barth will likely lose his jobs.

He also asked if Barth could serve jail time on the weekends so he could keep his jobs. Barth and his now-wife are living at home with his parents, and she is expecting a baby.

Addressing the court, Barth said he knows what he did was wrong, but he shot the gun out of the truck on his property, which he didn’t know was against the law.

“You’ve always been employed as a younger person, which is actually pretty impressive,” he said.

Kerenyi then sentenced Barth to 60 days in jail with credit for 10 days of time served. The request for weekend jail time was denied. Barth was also ordered to obtain an anger management assessment. The revolver was forfeited as part of the plea agreement.

The maximum time he could have gotten was 36 months in prison, Silwani said.