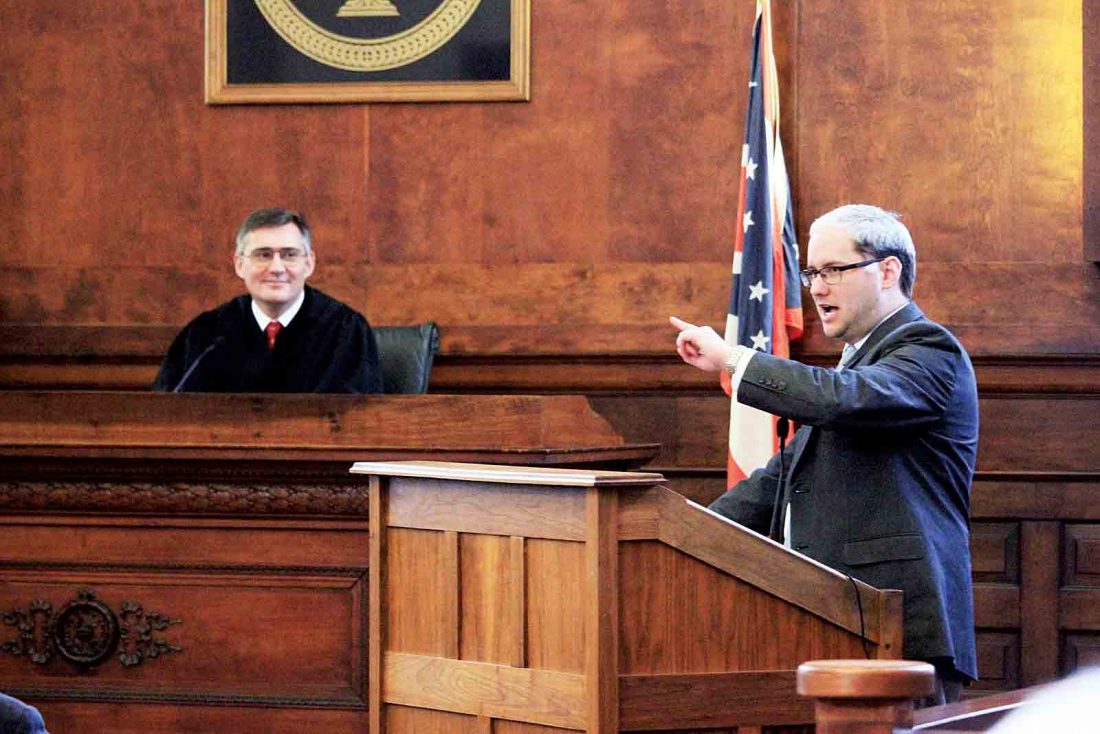 Randall Jedlink, right, performs as a defense attorney in the fictionalized “History on Trial” program put on by The Castle Museum Monday in the Washington County Courthouse with Judge Mark Kerenyi presiding. (Photo by Janelle Patterson)

MARIETTA — The dramatics witnessed in the Washington County Courthouse Monday drew laughter and interest from students and adults alike in the fourth annual installment of “History on Trial.”

The program, an idea first launched with The Castle Museum as an outreach to engage local support of immersive history with retired Common Pleas Judge Ed Lane, this year reviewed an 1860s case where consistent bullying ended in tragedy.

In the original case, a child was killed, allegedly by either the mother or son of Johnny Steed, who had been mercilessly bullied for his size and stutter.

To adapt the program for a more focused discussion on bullying, rather than introducing controversy over gun violence, Lane rewrote facts of the case to support felonious assault, rather than murder.

“But I really only removed the gun and the death, these attorneys had the rest from records of newspapers of the day and the great research Scott (Britton, executive director of The Castle) and Kyle Yoho (education director) did,” said Lane. “Plus, having Sue Boyer and Khadine Ritter join us, they’ve done so much with this.” 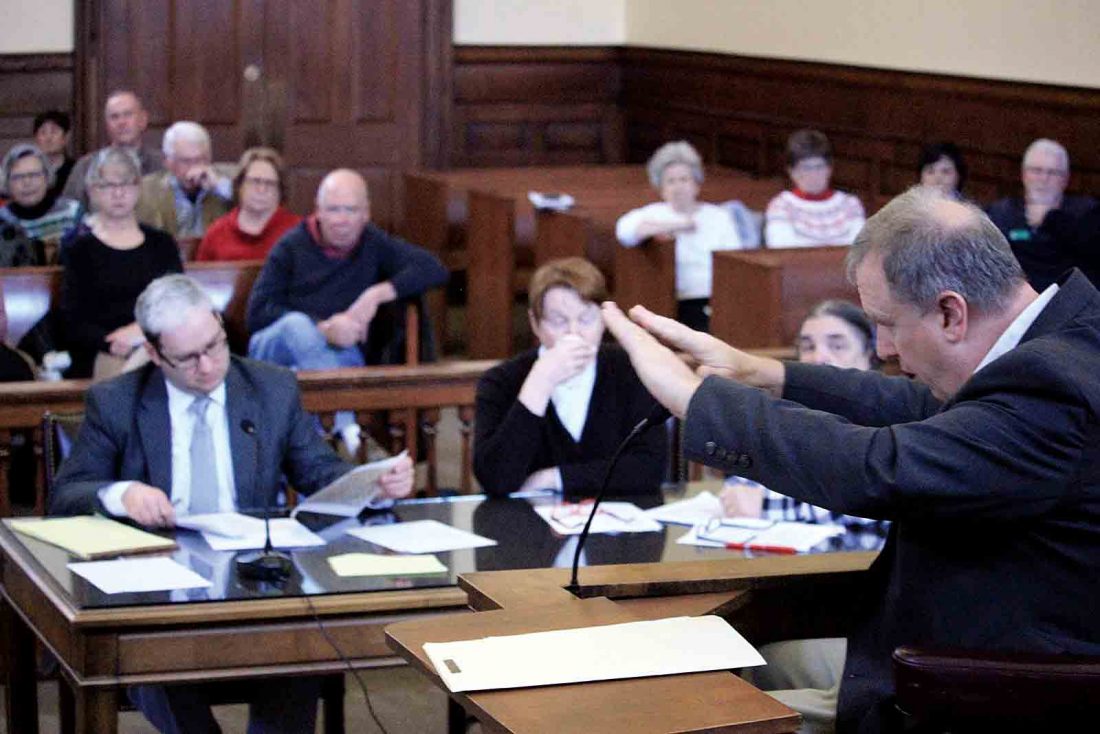 Ray Smith, performing in the “History on Trial” program as a police officer, testifies in the case against Mary Steed during the program put on by The Castle Museum in the Washington County Courthouse Monday. (Photo by Janelle Patterson)

In the historical program, the Steed family had fallen on hard times in 1864, having already lost their family farm to drought and moved into Marietta to live in an apartment above a barn while Mary Steed worked as a servant in the Meisenhelder home.

Then Mr. Steed was killed in Georgia in the Civil War, leaving Mary a widow with five children between infancy and 18 years old.

Retired Judge Susan Boyer played the part of Mary Steed, standing accused in the dramatized program of assaulting the Dutton child with a horseshoe.

“Johnny’s’ always been a sickly boy… I think the fever did something to his brain, he stutters,” testified Boyer as Mary Steed.

The legal teams laid out the facts of the case, that school children often followed Johnny Steed home from school and would throw rocks at him and at the barn. 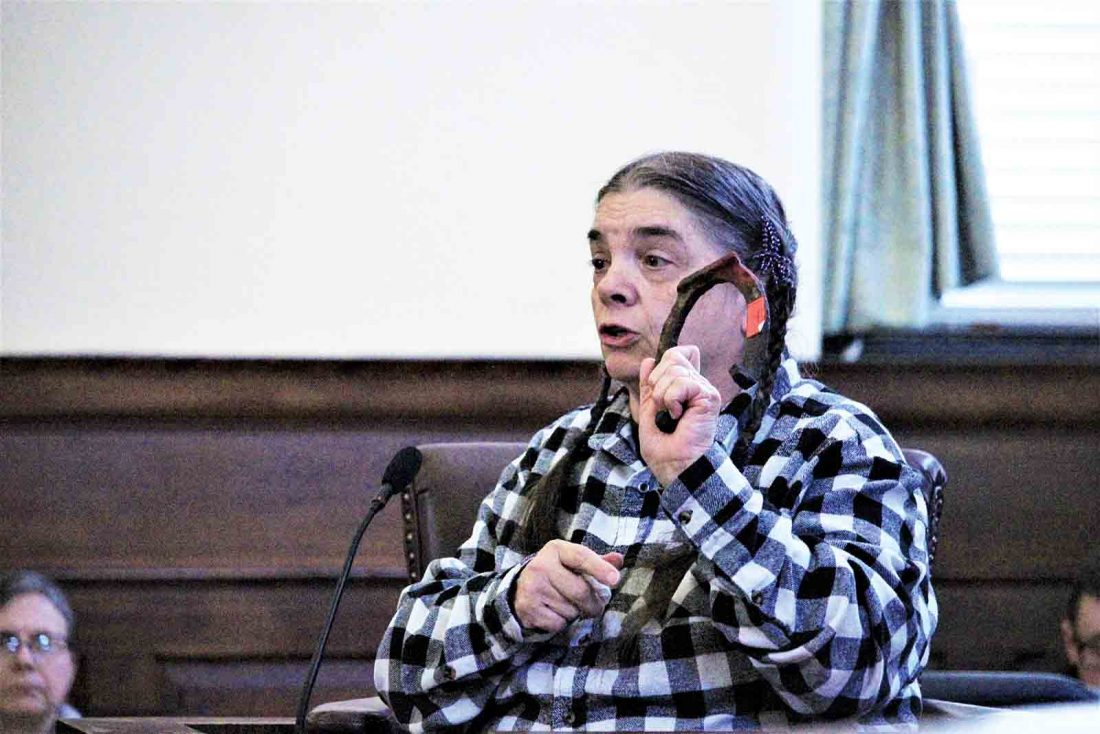 Playing the child of Mary Steed, Robin Bozian raises the alleged weapon of the “History on Trial” program in the Washington County Courthouse Monday. (Photo by Janelle Patterson)

Witnesses described the practice wearing on Mary Steed’s patience, while others including Public Defender Ray Smith offered testimony as Officer Goldsmith that Mary Steed had a criminal history of stealing, so assault couldn’t be a far jump.

“What’s fun about this is you get to play with it, even say plenty that wouldn’t be allowed in a true court hearing,” laughed Magistrate Randall Jedlink after the program. Jedlink played the part of Steed’s defense attorney.

“The theatrics of Robin (Bozian) and Susan (Boyer) and Shawna (Landaker) were just enthralling,” said Barb Moberg, of Marietta. “It was just so much fun to watch this, they pulled you into the story.” 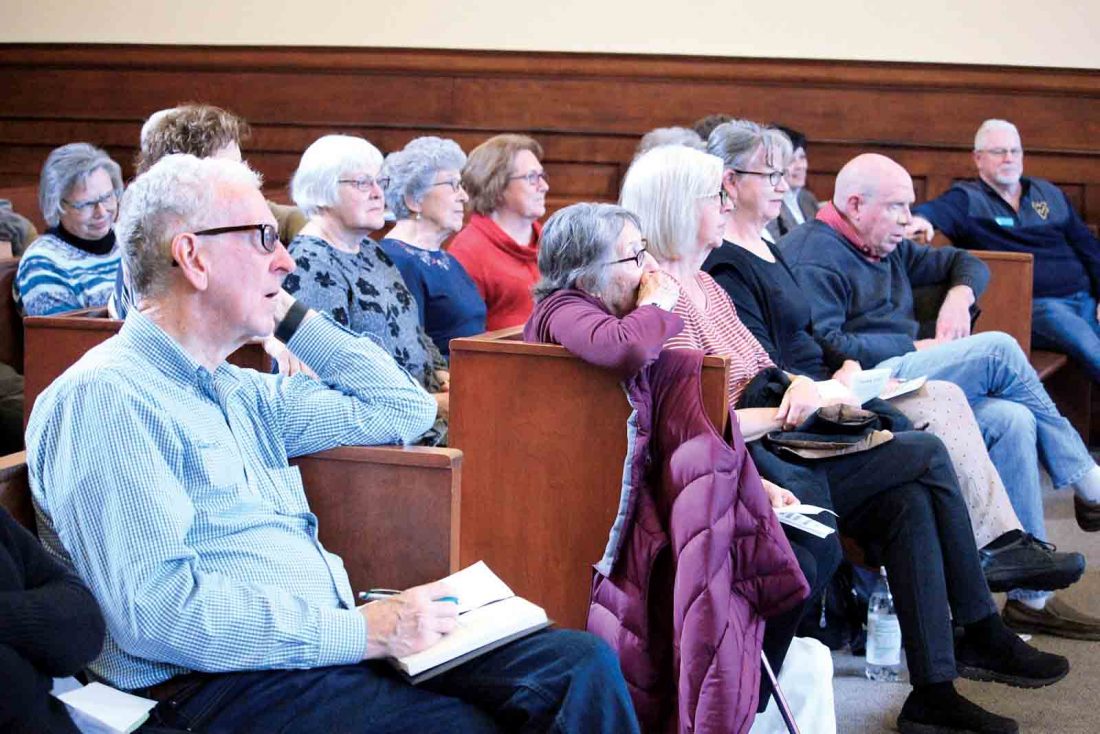 With a community verdict of “not guilty,” 45 out of 46 members of the public voted to acquit Mary Steed in a dramatized production in contrast to the original 1865 case where Steed was sentenced to 10 years in prison. (Photo by Janelle Patterson)

“I’ve always been a fan of learning more history,” he said. “This is a fun way to get to do that.”

While both the school-aged performance and the public showing brought forward not guilty verdicts, in the actual case, both Mary Steed and her son William Steed were each sentenced to 10 years imprisonment.

“William was sentenced to hard labor in the state penitentiary… Mary, we believe died in prison as there’s no record of her much after,” explained Britton. “And her children were sent to the poor house, where Johnny it seems died and was buried in an unmarked grave on the hill above the high school.”

For more information about The Castle, visit the museum’s website at mariettacastle.org.