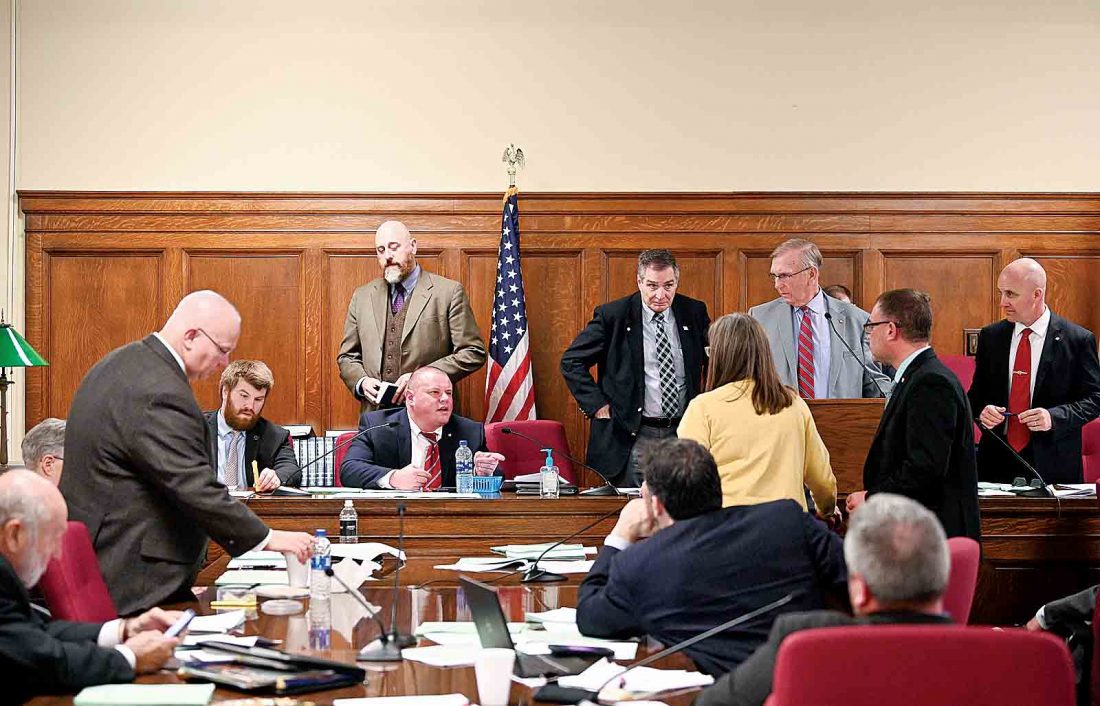 Members and staff of the House Veterans Affairs and Homeland Security Committee break to discuss whether Rob Cornelius can testify before the committee. Cornelius is the former chairman of the Wood County Republican Party who was removed last year over disputes with the state party chairman. (Photo courtesy of WV Legislative Photography)

CHARLESTON — The House Veterans’ Affairs and Homeland Security Committee moved three bills Tuesday afternoon amid questions regarding the use of the West Virginia National Guard, how a state agency conducts intelligence and controversy over the unexpected testimony of a Republican political operative.

HB 4176 would establish the West Virginia Fusion Center and codify its operation, address confidentiality and immunity from service of process; penalties, receipt of information, immunity from liability, costs and relating to Class A registration plates for official use.

According to the Department of Military Affairs and Public Safety, the Fusion Center allows local, state and federal law enforcement and public safety agencies to share resources, expertise and information. The agency works to prevent, detect, investigate and respond to all hazards, including terrorist and criminal activity.

The Fusion Center’s functions were set by executive order of former Gov. Joe Manchin in 2008, along with other executive orders over the years. HB 4176 codifies these executive orders for the first time, as well as provide civil liberties protection and legislative oversight.

Committee members had been asking questions of counsel and Thom Kirk, deputy secretary of the Department of Military Affairs and Public Safety. After that, Delegate S. Marshall Wilson, I-Berkeley, asked to hear from political operative Rob Cornelius.

Cornelius is in a court case involving his removal as chairman of the Wood County Republican Executive Committee and as an elected member of the committee. He was removed by state GOP Chairman Melody Potter.

On June 29, 2018, Cornelius’ photo had been seen at the security desk of the TransCanada Building in Charleston, which is also home to the Fusion Center, after a series of tweets under the handle “ByrdsFinger” criticizing the governor’s office for monitoring him.

In an additional Fusion Center memo released to Cornelius in a Freedom of Information Act request, the photo of Cornelius was removed from the security desk after Cornelius tweeted a picture of his photo posted at the desk.

Cornelius did not get to testify after a point of order was raised about Cornelius not being a technical expert on the strike-and-insert amendment the committee was considering. Wilson objected to efforts to silence Cornelius.

“I disagree…what we’re talking about here is whether or not (Fusion Center) abilities and capabilities can be used to infringe upon the civil liberties of this state,” Wilson said. “It’s exactly what this strike-and-insert is supposed to protect.”

HB 4176 now goes to the House Judiciary Committee, as does HB 4485, which would create the new Department of Homeland Security out of the Department of Military Affairs and Public Safety. The renamed department would include the West Virginia State Police, the Intelligence Fusion Center, the State Fire Marshal, the Division of Protective Services and the Parole Board.

The bill renames the Division of Homeland Security and Emergency Management to the Division of Emergency Management and allows for at-will hiring. The committee substitute adds in an additional bill to create a State Resiliency Office and advisory board, which will help guide disaster mitigation planning. The bill also takes the West Virginia National Guard out of the Department of Military Affairs and Public Safety and makes it its own stand-alone agency.

Lastly, the committee approved House Bill 2732, the Defend the Guard Act, in a 15-7 vote. Its next stop is the House Judiciary Committee, where a similar bill languished last year before being brought to the House floor in a discharge motion.

The Defend the Guard Act would prohibit members of the state National Guard from participating in active combat duty unless an act of war has been passed by Congress or if Congress has specifically called for use of the National Guard within its constitutional powers. An attempt to discharge the bill last week from the Veterans Affairs and Homeland Security Committee failed in a 50-50 vote.

Questions arose during the brief discussion of the bill regarding constitutional issues about limiting the use of the National Guard, as well as possible loss of federal funding for guard training.

“I do think we have some serious constitutional questions to be answered here,” said Delegate Jim Butler, R-Mason.