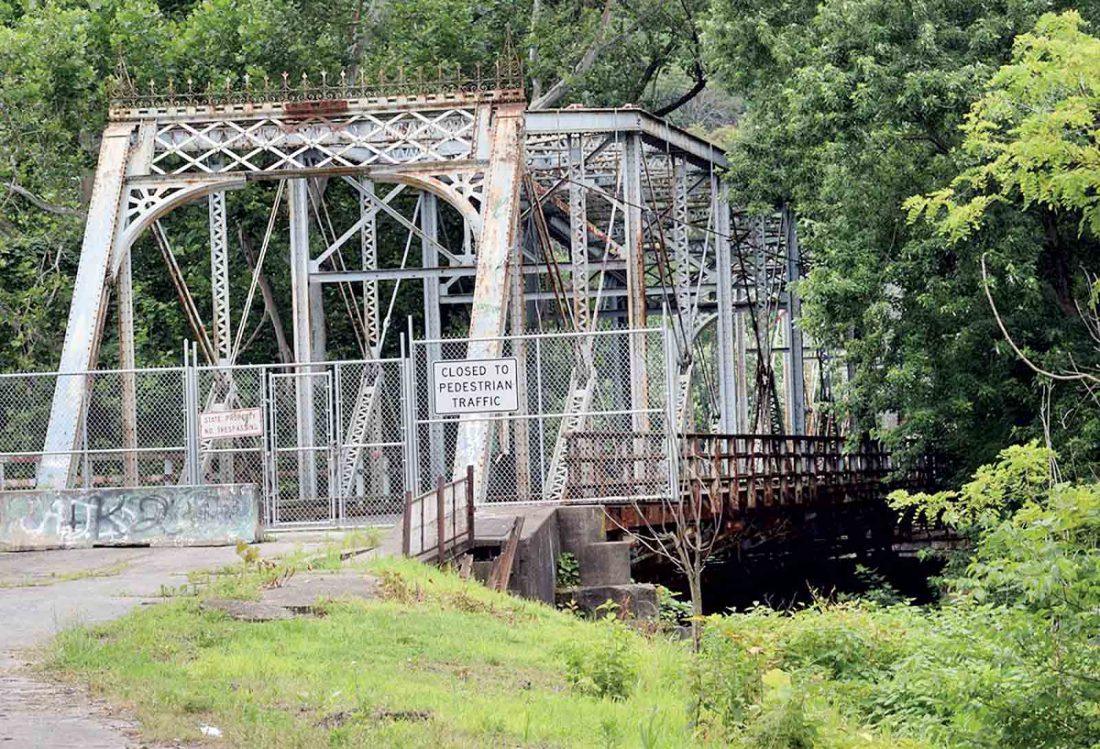 The Aetnaville Bridge between Wheeling Island and Bridgeport, Ohio, that was closed in 2016. (File Photo)

WHEELING — It’s not exactly the Brooklyn Bridge, but West Virginia has another bridge it’ll sell you.

The West Virginia Division of Highways is requesting bids to potentially purchase the closed Aetnaville Bridge that is slated for demolition later this year.

The bridge, which was built in 1891 and spans the back channel of the Ohio River between Wheeling Island and Bridgeport, Ohio, has been closed to vehicular traffic since 1988, but allowed bicyclists and pedestrians up until four years ago. The span was permanently closed in 2016 when a routine inspection found “imminent” failure conditions.

Anyone interested in bidding to purchase the bridge must submit a preservation and financial plan, along with information on how they intend to use the historic span. If the state accepts the bid, the buyer will be responsible for maintaining it and adhering to historic inspection standards, along with federal regulations.

“Upon review of all proposals, the party that most clearly defines the intended use, method of rehabilitating the structures, means of securing funds for rehabilitation and shows examples of the ability to construct and provide inspection, will be eligible to become the Responsible Entity,” according to the bid request.

An agreement would then be drafted with the winning bidder to purchase the bridge and finish the transaction. However, if no bidder is deemed a “responsible entity,” the state will proceed with plans to demolish the bridge.

The state held an informational workshop in June that initiated a 30-day public comment period for people to offer their thoughts on what should happen to the bridge. The meeting attracted preservationists and local residents who wanted the state to find ways to save the bridge for pedestrians and bicyclists.

State officials said at the meeting they expected the project would receive environmental approval for demolition by last November, and a demolition contract could be awarded by this summer.

Wheeling officials put forth a plan to state transportation officials in December that would allow the city to build a new bridge for bicyclists and pedestrians reusing the Aetnaville Bridge’s current piers. The project to build a 10-foot-wide span would cost about $3 million and be a joint venture among Wheeling, the two states and Bel-O-Mar Regional Council. State Transportation Sec. Byrd White responded saying engineers were reviewing the proposal and would respond by early February.

It is unclear how the potential bidding process could affect Wheeling’s proposal.

Any organizations interested in taking ownership of the bridge should send their bids by April 15 to the West Virginia Division of Highways, RJ Scites, Director of Engineering Division, 1334 Smith Street, Charleston, WV 25301.