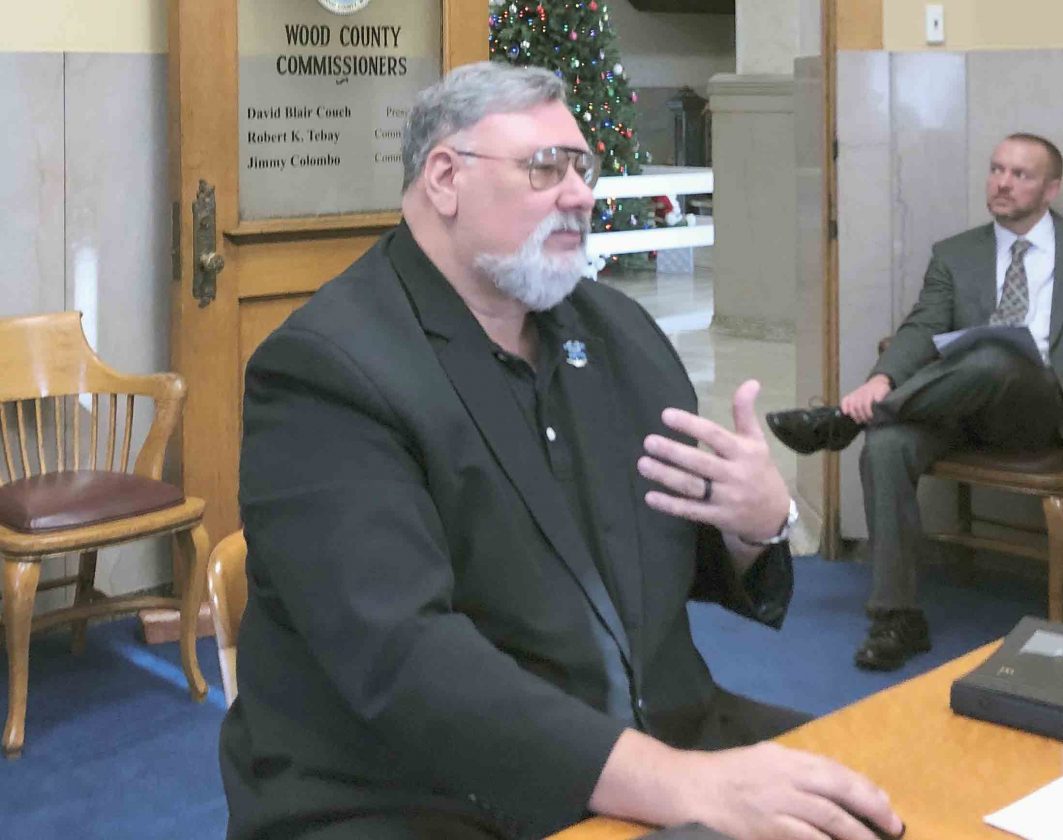 Mid-Ohio Valley Regional Airport Manager Glen Kelly appeared before the commission Thursday to give an update on what is happening at the airport. Kelly highlighted growing enplanements and plans for maintenance and renovation work and the airport site. (Photo by Brett Dunlap)

PARKERSBURG –The Mid-Ohio Valley Regional Airport is looking at a number of upgrades in the coming years to modernize it with the needs of an airport in the 21st Century.

Airport Manager Glen Kelly appeared before the commission Thursday to give an update on what is happening at the facility.

Kelly said the vision of the airport is to support the needs of the area to promote economic growth by focusing on current and future aviation requirements to enhance capabilities to meet transportation needs as well as be prepared for any state or national need with military organizations to provide the needed infrastructure in times of need.

“In 2018, we were the second busiest airport in the state, for takeoffs and landings, edging out Charleston and only behind Morgantown,” Kelly said. “Half of our traffic is corporate.

“That is what drives our business. We typically have 4-5 nice jets in there a day.”

DuPont officials regularly use the airport. Officials from Menards which is building a new store at Emerson Commons has been utilizing the airport to keep up with that project as well as check on their new location in Athens, Ohio.

With fuel sales, Kelly said the airport is up 31,000 gallons compared to this time last year. Last year it sold 375,000 gallons of fuel.

“Our fuel sales have been going up steadily year after year,” Kelly said.

The airport is receiving a $8 million infrastructure grant through the Federal Aviation Administration.

Grants are being received to improve the runways and lighting. Work has been done to access roads, signs around the airport, runway painting, restaurant upgrades, upgrade the waiting area for corporate customers and more.

“I want the airport to be a great gateway to our area,” Kelly said.

Kelly wants to do more extensive parking lot renovations in the future. Asphalt has deteriorated, weeds are springing up and work needs to be done.

“One of my major concerns is the parking lot,” Kelly said.

The lot has 65 painted slots in the parking lot..

Kelly would also eventually like to do renovations to the main terminal building and remodel it to be more in line with today’s standards. They are applying for grants and FAA assistance. Gov. Jim Justice has supported airports across the state.

Business has seen an increase because of service from Contour Airline.

“Contour has been named, for the second month in a row, the most on-time airline in North America,” Kelly said. “They have been maintaining the 1 or 2 spot since January.”

The airport is averaging 24 enplanements a day.

“That is excellent,” Kelly said.

Kelly said the company works hard to make sure planes come and go as close to on time as possible.

Charlotte, N.C., the main destination for flights from the airport is among the fastest-growing airline destinations in the country with flights around the United States.

Commission President Blair Couch said there are more people working at the airport.

“I love the airport,” he said.

In other business, Jean Ambrose of the Festival of Arts, Music and Motion discussed using Veterans Park again for next year’s festival.

The festival was held in September at Veterans Park after organizers originally scheduled it at West Virginia University at Parkersburg, but construction and other issues prompted organizers to find a different location this year.

Originally, organizers planned to return to WVU-P next year, but they had such a good event Ambrose wanted to secure the park again next year. The festival promotes positive relationships and interconnection among people in the community.

“We had a good time,” she said. “We had quite a few young people there and we had great music. We want to use Veterans Park again.”

Due to other prior bookings, they did not have the full use of the park and all of its shelters . Ambrose wanted to secure those now as well as a timeframe where they could have a day to set up before the event.

Part of their reasons is they want to make a concerted effort to be able to include local veterans and their families.

“We are starting to work and that and plan,” Ambrose said.

They are looking at Aug. 29 to hold the next festival.

There were no bookings for that date and the county scheduled the festival for that day.

Brett Dunlap can be reached at bdunlap@newsandsentinel.com.