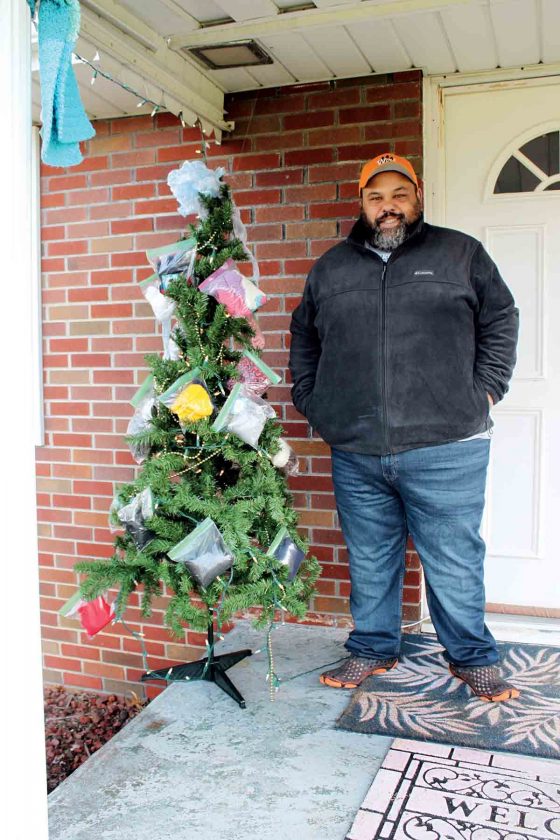 Andrew “Bubba” Powell has proudly gone through three months of rehab and is on the road to recovery. In a letter to the Wirt County QRT and Recovery Team, he said he hopes he can help effect change in the area. He stands with the Christmas tree adorned with hats, gloves and scarves, free to anyone that needs them at 99 Cherry St. in Elizabeth. (Photo by Candice Black)

ELIZABETH — After nearly a year of service, the Wirt County Quick Response and Recovery teams are increasing their numbers and the success stories of community members who have received help on the road to recovery from substance abuse.

Over the past year, the organizations have served 103 clients and all but six of them are in some phase of active recovery. The success rate is 92.4 percent.

One person in particular, Andrew “Bubba” Powell, has come a long way, according to Kim Richards, coordinator.

“I made contact with him through another client and he learned that I was a safe person and when he was ready to do something different, he contacted us and we got him into rehab,” Kim Richards said.

Matt Richards, Kim’s husband and fellow coordinator, said it was in part due to “compassion and no judgment.”

Powell wrote a letter to the organization saying how grateful he is for the support and help after completing a 3 month rehab program.

“Since I have been out, I have been volunteering my time to the food pantry, the Hope Shop and to the Recovery Program that helped save my life,” Powell said. “I hope to show everyone that it is possible to change with honesty, open mindedness and a little willingness.”

Keeping contact with clients is one way that makes them successful, Kim Richards said.

“That’s why our success numbers are so much higher. We work 18 plus hours a day and we make contact with every client on a daily (basis),” she said.

Sheriff T.D. Corbitt said the QRT and Recovery Team has helped people in a way that he would never imagined. He also said there has never been a serious issue at the Recovery House.

“This program has been so much more successful than I ever hoped it would be,” Corbitt said. “It’s been so beneficial that we’re out of room in the house we’re in now.”

The organization it looking for a bigger home for the Recovery House. The house is full but bunk beds will be built soon to accommodate more clients. Eight beds will be added, four in the men’s room and four in the women’s.

About 19 people a day come into the house for a service of some sort, Kim Richards said.

She described their growth as “wildfire. There’s no other explanation,” Kim Richards said.

Word of mouth has been the biggest help toward growth, Corbitt said.

The hope is to recruit volunteers for the Recovery House who are at least six months into the recovery process, Matt Richards said, and so far a couple of people are on that track.

“Honestly that’s the best way to reach the other people because they understand, they know, they’re friends,” Matt Richards said.

Corbitt said at first, the idea of the Recovery House was met with resistance among community members.

The Recovery Team is putting on the Giving Tree project. A tree decorated with hats, scarves and gloves is on the front porch of the Recovery House. Those items are free to anyone who needs them. Several of those items were hand made by community members, Kim Richards said.

With the new bunk beds that will be in the house, there’s a need for pillow cases, sheets, mattress pads, blankets and other bedding items. Connect with the Wirt County QRT and Recovery Team to donate and to receive updates.