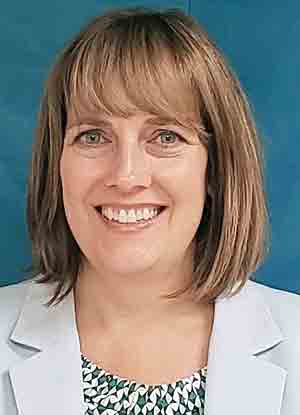 Former FBI agent Jennifer Wilson has been appointed director of the new Division of Administrative Services in the West Virginia Department of Military Affairs and Public Safety.

CHARLESTON — A former FBI agent who led agency operations in New York, Washington, D.C., and San Francisco has been appointed director of the new Division of Administrative Services in the West Virginia Department of Military Affairs and Public Safety.

Jennifer Wilson will lead the division created in 2018 in a consolidation of the West Virginia prison, jail and juvenile services systems. Wilson, who was acting director since late September, said she was honored.

“Over the last 60 days, as the acting director, I have been impressed with the leadership team here and the employees’ dedication and commitment to the success of the newest division of the Department of Military Affairs and Public Safety,” she said. “I plan to focus the next year on completing the staffing and developing more efficient systems to serve the DMAPS agencies.”

Wilson joined the FBI in 1997 after practicing law in Cabell County as a public defender and prosecutor.

She completed her FBI tenure in Pittsburgh as a task force coordinator that brought her back to West Virginia through a multiagency federal investigation targeting drug trafficking in the region.

Her duties eventually expanded to full time, and she began helping Administrative Services with personnel issues and legislative proposals.

“When the director positions at DAS came open, we again reached out to Wilson,” Sandy said. “During her acting assignment, Wilson has strengthened DAS relationships with all internal and external partners.”

Administrative Services allows the leaders of Corrections and Rehabilitation as well as other DMAPS agencies to focus on their core missions, state officials said. Inspired by the U.S. Treasury Department’s Bureau of Fiscal Services in Parkersburg, the division handles functions common to state agencies, including human resources, payroll, recruiting, contracts and procurement, and vehicle and property management, officials said.

Administrative Services said it hopes to become a model for effective streamlining across state government.