Williamstown native in good spirits while recovering from breaking neck 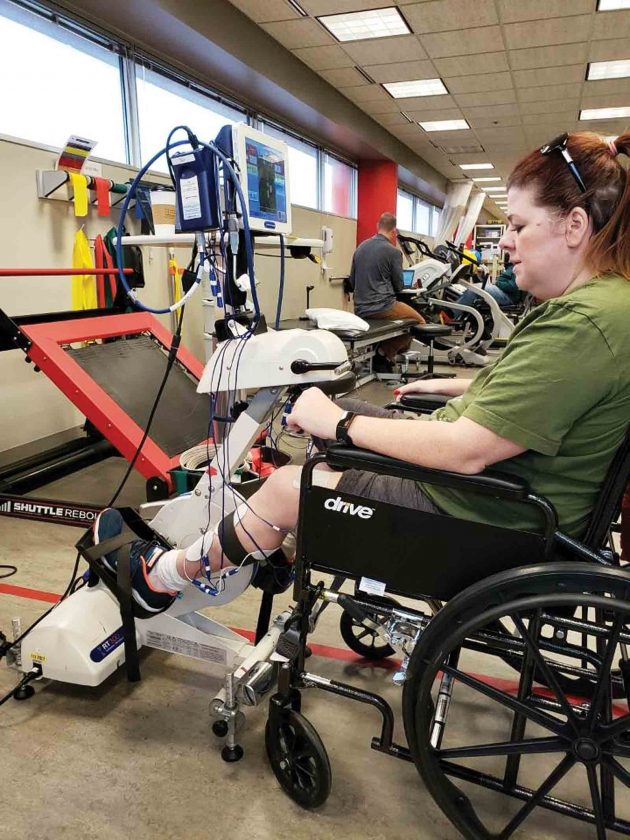 Tricia Dobbins Sancranti goes to physical therapy to get feeling back into her leg muscles after her July 27 trampoline accident. (Photo by Kristen Roddy)

MARIETTA — It has been four months since 45-year-old Tricia Dobbins Sancranti broke her neck in a trampoline accident, but she’s home and in good spirits.

“They have me on a treadmill walking. I’ve done that about three times,” she said. “My legs don’t work, but they move them so my muscles remember. I’ll do that until they do remember, but we don’t know when that will be.”

Sancranti grew up in Williamstown, but now lives in Columbus with her husband, Mike. She was visiting friends July 27 and was playing with the kids on their trampoline when she tried to do a flip. Her neck snapped when she landed upside down.

She said it takes five people to work with her on the treadmill, but it’s good exercise.

“It gets me upright and it’s good for my circulation,” Sancranti said. “There’s someone behind me to keep my hips forward. Two keep my legs moving and my feet in alignment. One is running the computer and my therapist is giving me pointers. I usually have my husband on the sidelines taking video and cheering me on. It’s definitely a five to six man operation, for sure.”

She said her work on the treadmill has helped. Her balance is getting better and although her fingers don’t work, she’s getting a little more movement in her thumbs.

She also deals with a lot of body spasms.

“My muscles are constricting. It’s pretty typical with spinal cord injuries,” Sancranti said. “There’s a lot of communication going up and down my spinal cord, but my brain doesn’t know what to do with it yet.”

Her sister, Kristen Roddy, said Sancranti’s recovery is a crapshoot.

“It will probably be very long term. Maybe two to seven years before she might be able to take a step,” Roddy said.

In the meantime, Sancranti is still having fun. She goes twice a week to the Franklin Park Adventure Center in Columbus, where they have an adaptive gym and wellness group. She works out and chats with others about their injuries and recovery.

“Twice a month, we go on outings,” she explained. “I did archery in October and was able to shoot a bow and arrow using an adaptive wrist attachment. I shot the bow using my mouth. In November, we went rock climbing.”

She had to be put in an adaptive harness before she could work her way up the rock wall using a bar. She said she incrementally raised herself, before making it the 30 feet to the top.

Roddy said there will be a local fundraiser to raise money for medical expenses. Smitty’s Pizza in Reno and Marietta will donate 50 cents for every pizza and sub ordered from 3 p.m. to closing on Thursday.

She will also be auctioning off baskets and items on Facebook to raise money. Roddy is looking for donations for the themed baskets for themes such as dog basket, sports basket, spa basket, hunting basket, wine/cheese/crackers basket, family game night, dinner/movie night, home decor and gift card Christmas tree. Items can be dropped off at the Peoples Bank on Putnam Street or at Stinkeye Customs in Barlow.

Sancranti said for the time being, she’s just a little different.

“I’m still pretty much my happy-go-lucky self,” she said. “I have mostly good days, but I have some bad days. I allow myself about five minutes of a pity party and then I get over it.”