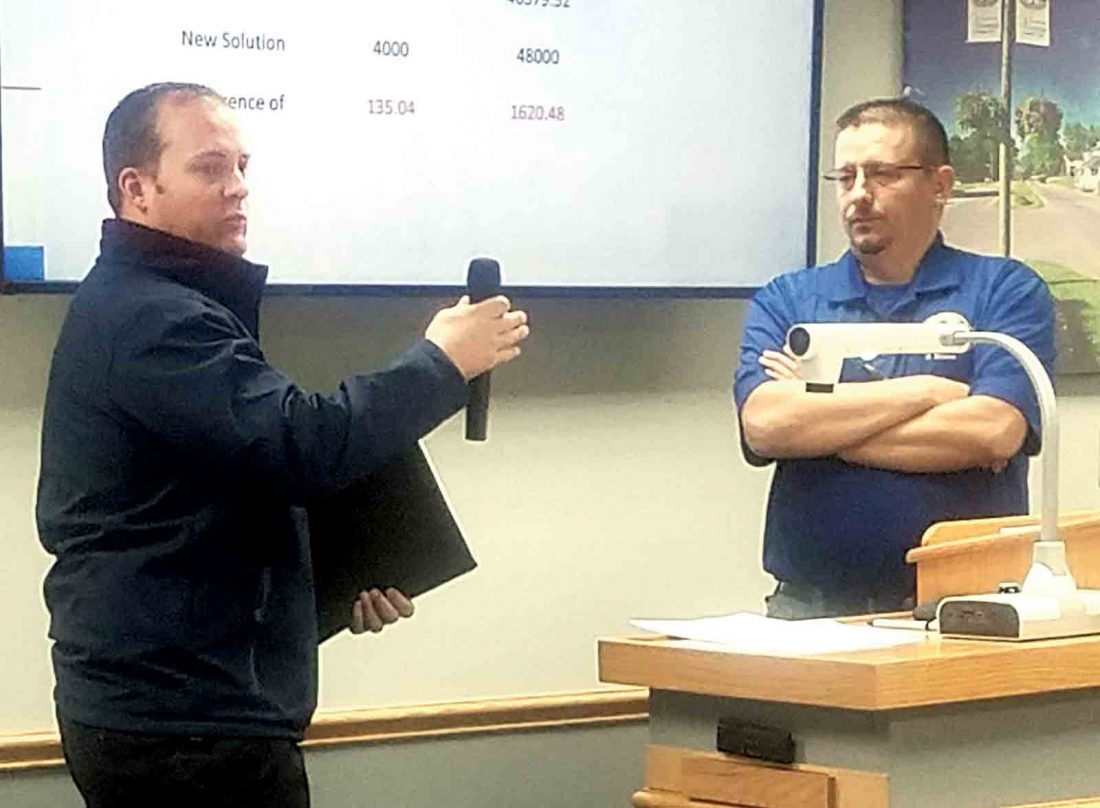 From left Kevin McPherson, a Segra representative, presents the security updates available with Chris McGrew, with the city of Vienna’s information technology. (Photo by Madeline Scarborough)

VIENNA — Vienna City Council members had some disagreements on spending issues presented at Thursday evening’s meeting, but all budget revisions and bid acceptances did pass.

Council members Roger Conley and Mike Elam did not agree with spending $121,000 on a new wheel loader, a four-wheel-drive machine used primarily to load loose materials with a front-mounted bucket. They suggested getting one that had been lightly used or refurbishing the one the city uses now.

Mayor Randy Rapp explained that the wheel loader in use now is 23 years old, has become unsafe to use and requires so many parts to be fixed that it would be best to buy a new one.

Conley still felt there could be a cheaper option, but the general fund budget revision to move $121,000 from Capital Reserves to Streets for the wheel loader passed 4-2.

Conley and Elam also voted against accepting a bid from Walker Machinery for $120,970.19 for the purchase of a new compact wheel loader, but the bid was accepted 4-2.

Chris McGrew, with the city of Vienna’s information technology, gave a safety update. He proposed a contract with Segra, a fiber network provider, which would keep the city safer from cyber attacks, McGrew said.

“Right now we have seven points of entry, and after the Wood County Board of Education was attacked, that scares me,” said McGrew.

McGrew explained that the new system, which would update phones as well, would cost $135.04 more a month than the city pays now. The city would be getting a lot more for its dollar, he said.

This would leave the network more secure with only one point of access, up to date and without lag as it is not on a consumer internet, McGrew said. This will be voted on by council at a later date. Thursday’s presentation was informational only and City Attorney Russell Skogstad needs to review the contract.

* Toni Tiano, the city grant writer, submitted the annual report for the Community Development Block Grant. The city used $85,273 to help 17 homes in the area, meeting its goal.

* Council passed on first reading the authorization to sell the 31st Street Garage.