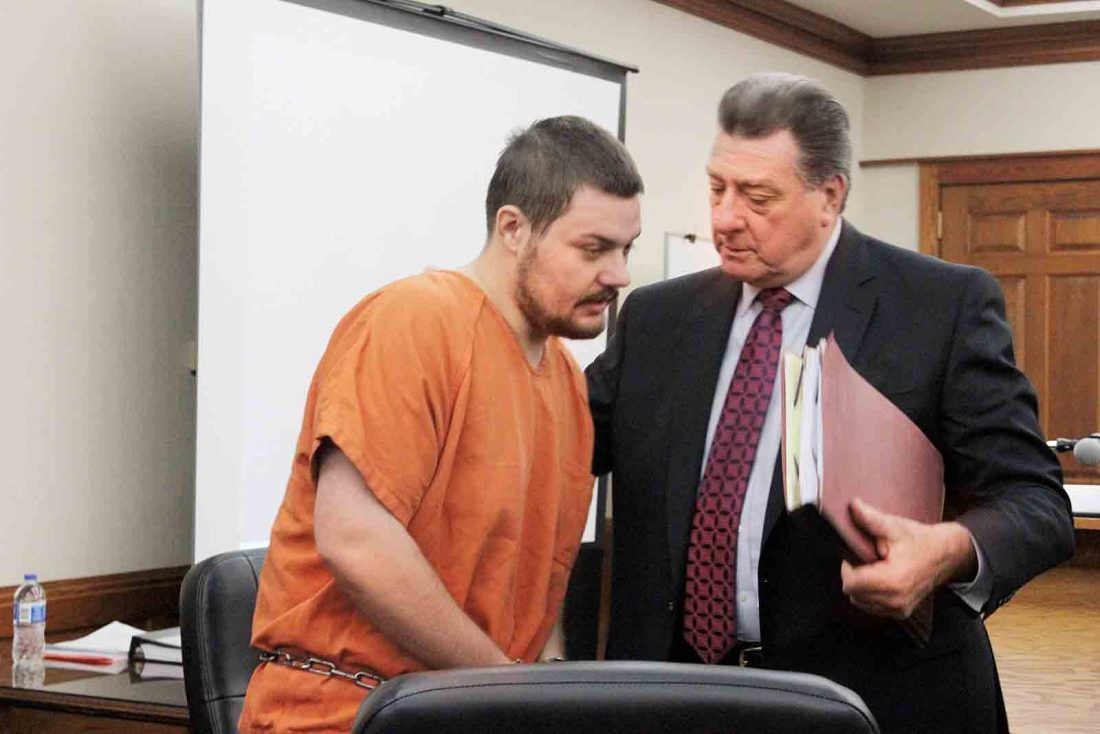 Zachary Myers, left, listens to guidance from his attorney George Cosenza as the two rise from the defense table in Washington County Common Pleas Court Thursday. (Photo by Janelle Patterson)

MARIETTA — The Marietta man who used a brick to assault his mother’s neighbor last year was granted judicial release Thursday and is expected to move in down the road from his victim upon release.

Zachary Myers, 29, of 100 State St. did not speak during his hearing before Appointed Judge Randall Burnworth but was supported in the gallery by family.

Myers assaulted Christopher Burrows, 47, during an argument on July 12, 2018, fracturing facial bones on both sides of Burrows’ face and resulting in 10 stitches in his face, nine staples in the back of Burrows’ head and a plate and eight pins in Burrows’ ankle from injuries sustained after Burrows fell unconscious from the blow.

“Zach got six months in prison, my husband still has a traumatic brain injury, post-traumatic stress disorder and has developed sleep apnea,” said Amanda Lamp, Burrows’ wife, after the hearing. “I don’t think justice prevailed in this case.”

Myers served 73 days in local incarceration in the Washington County Jail and six months incarceration in a state-run prison before his release, and Burnworth required that Myers have no contact with the victim as a condition of his early release from the 18-month sentence he received in June.

Assistant Prosecutor David Silwani said the plea agreement he reached with Myers’ attorney George Cosenza was the best option available “based on the facts of the case” but followed the hearing by explaining to Lamp the additional conditions of early release as Myers remains under the supervision of the Adult Parole Authority for three years.

“Keeping him on judicial release keeps an eye on him now that isn’t guaranteed if he had served his full sentence,” Silwani explained, noting post-release control is an option of the court system –not a requirement. “He has to remain on good behavior for three years (without violations), or he gets yanked back to prison to finish that 18-month sentence.”

Lamp said her husband is still unable to return to full-time employment due to the effects of his injuries.