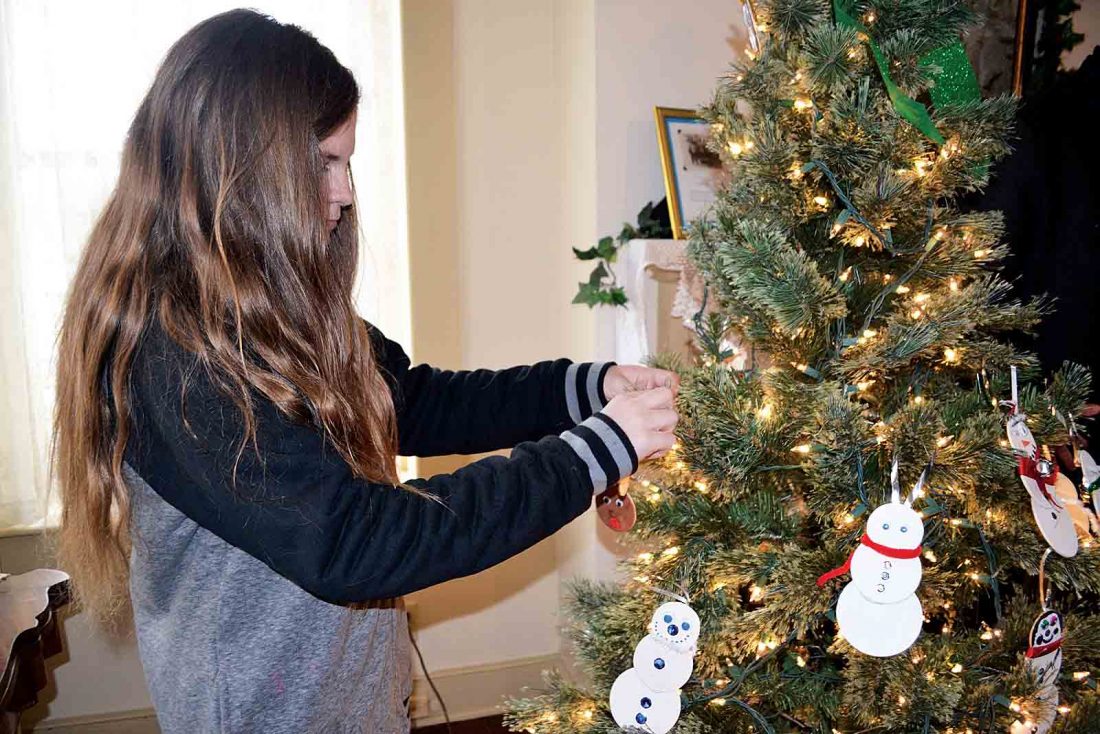 Riley Myers, 10, hangs her ornament on the tree at the Henry Fearing House Museum on Friday afternoon. (Photo by Michele Newbanks)

MARIETTA — Fifth-grade students from Harmar Elementary participated in a long-standing tradition of visiting the Henry Fearing House Museum for Christmas on Friday. The students added ornaments they decorated to a tree in the museum.

Marietta resident and museum volunteer Mary Jo Hutchinson said the school calls every year to ask if the students can visit, but no one remembers how long it’s gone on.

The house was built in 1847 and is located at 131 Gilman Ave. in the Harmar village. The house reflects the Victorian era and was built for prominent businessman Henry Fearing. It was also the home of Civil War General Benjamin D. Fearing.

As the groups of students filtered through the museum, they learned information about Victorian times, mostly about Christmas.

“I learned on Dec. 6 in England, they take their shoes off and put them under the chimney,” said 11-year-old Lily Miller.

Hutchinson said every year, the students decorate a different type of ornament. This year, it was reindeer and snowmen.

“We’ve never had the same type twice,” she said.

The children used a variety of art and craft supplies, such as paint, glue, pipe cleaners and sequins to decorate their ornaments. Some were colorfully covered in sequins, while others had minimal decorations.

Many of the students bubbled with information they had absorbed through the tour.

Savannah Marshall, 11, learned that when children got baptized, both girls and boys wore dresses, while 10-year-old Lexie Newlon learned children got little dolls with a dollhouse at Christmas.

Local residents can see the ornaments the students made during the museum’s annual Christmas open house from 1to 5 p.m. Dec. 14 and 15. The open house will feature music, Victorian holiday decorations and multiple Christmas trees, including a nine-foot-tall folk art tree.