The window at the Workingman’s Store on Putnam Street will soon be filled with stuffed animals for WMOA’s annual Christmas Zoo. (Photo by Michele Newbanks)

Laura Bays of WMOA accepts stuffed animals that were donated to the Christmas Zoo by Deana Clark, executive director of the Marietta-Washington County Convention and Visitors Bureau, and her granddaughter, Zooey. (Photo by Michele Newbanks) 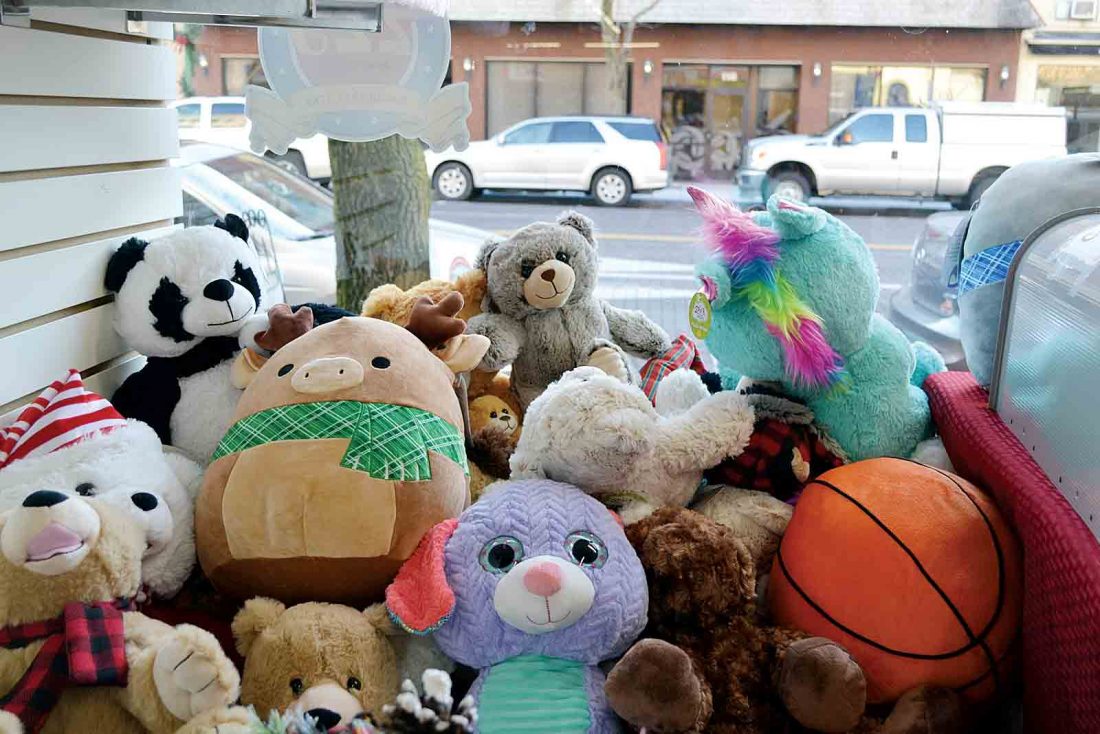 The window at the Workingman’s Store on Putnam Street will soon be filled with stuffed animals for WMOA’s annual Christmas Zoo. (Photo by Michele Newbanks)

MARIETTA — The Workingman’s Store on Putnam Street is starting to look like a toy store as local residents donate to WMOA radio’s Christmas Zoo.

“Usually we start on Black Friday. This year, we started on Nov. 25 and we did that because there’s a little less time this year between Black Friday and Christmas, with Thanksgiving so late,” she said. “(The toy drive) runs through Monday, Dec. 23.”

Bays said the Christmas Zoo brings in about 95 percent stuffed animals, and while the toy drive is focused mainly on stuffed toys, some people bring in other items.

“Just about everybody can remember a time in their past when they had a favorite stuffed animal or a stuffed animal to talk to, to cry in, to cuddle with, or to hold. A lot of the children that are served by the organizations, that get these animals are in some sort of situation,” Bays explained. “Their family is experiencing financial trouble or they are in foster homes, so I think it’s because everyone can relate to having that one special teddy bear just to hold on to.” 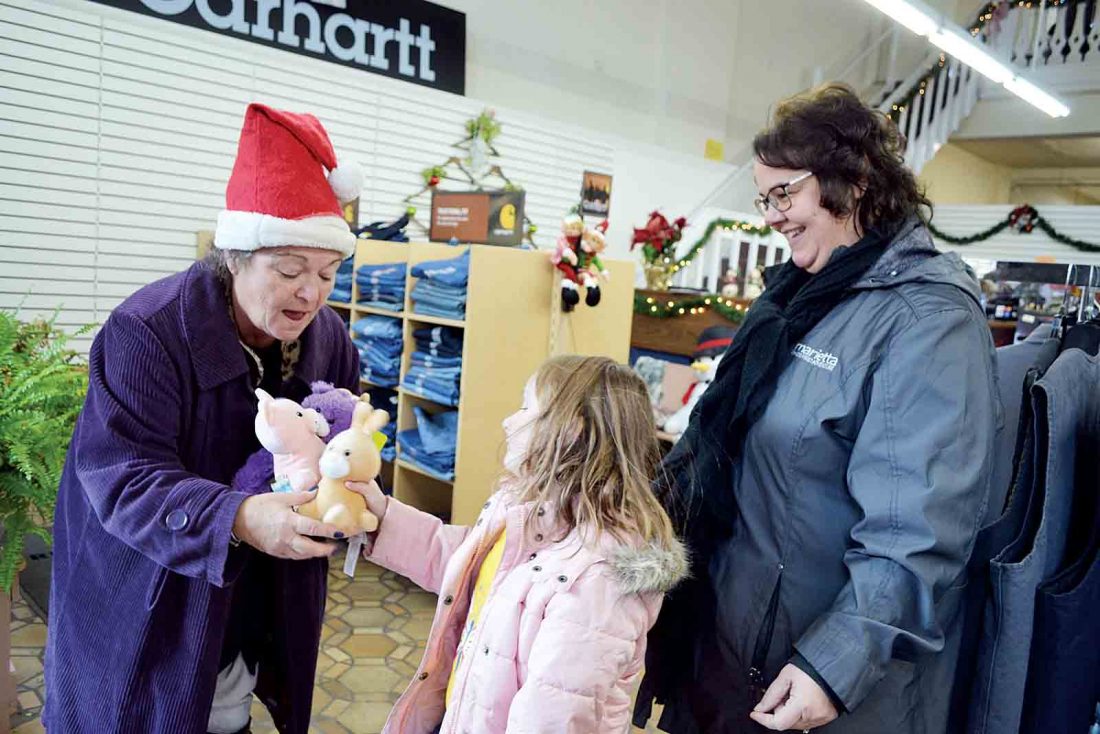 Laura Bays of WMOA accepts stuffed animals that were donated to the Christmas Zoo by Deana Clark, executive director of the Marietta-Washington County Convention and Visitors Bureau, and her granddaughter, Zooey. (Photo by Michele Newbanks)

“I think logistically, it’s a lot easier to fill up a window with stuffed animals. It’s easier for people to pick up a stuffed animal and bring it in,” she said. “But I think the emotionality of it is really the reason, because everybody can remember that one stuffed animal that you carried around with you as a kid. Mine was a monkey.”

Deana Clark, executive director of the Marietta-Washington County Convention and Visitors Bureau, and her granddaughter, Zooey, stopped by the Workingman’s Store Wednesday morning to drop off a bag of stuffed animals.

This is the 13th year for the Workingman’s Store to host the zoo and Bays said she has enjoyed the last six years doing the morning show from the store’s front window.

“It’s so much fun. I’m down here in the window every morning from 6 to 10 a.m. Monday through Friday, and it is so awesome to watch this window fill up,” she said. “Before we’re done, I won’t even be able to see out of the window when I stand up. The whole window is filled with animals and it’s so cool to watch that.”

There is also an afternoon zookeeper that comes in from 2 to 6 p.m. Monday through Friday, she added, but people can bring in stuffed animals any time during the store’s business hours.

Once the drive is over, the stuffed critters are given to several organizations to be distributed to children.

She explained that for many families, the Christmas Zoo has become a tradition.

“We’re three generations deep in some families, of making the Christmas Zoo a tradition. I have people come in in their 30s with their children who said ‘my grandparents brought me in here when I was young and now I bring my kids in here,'” she said. “It’s cool to hear the family traditions.”