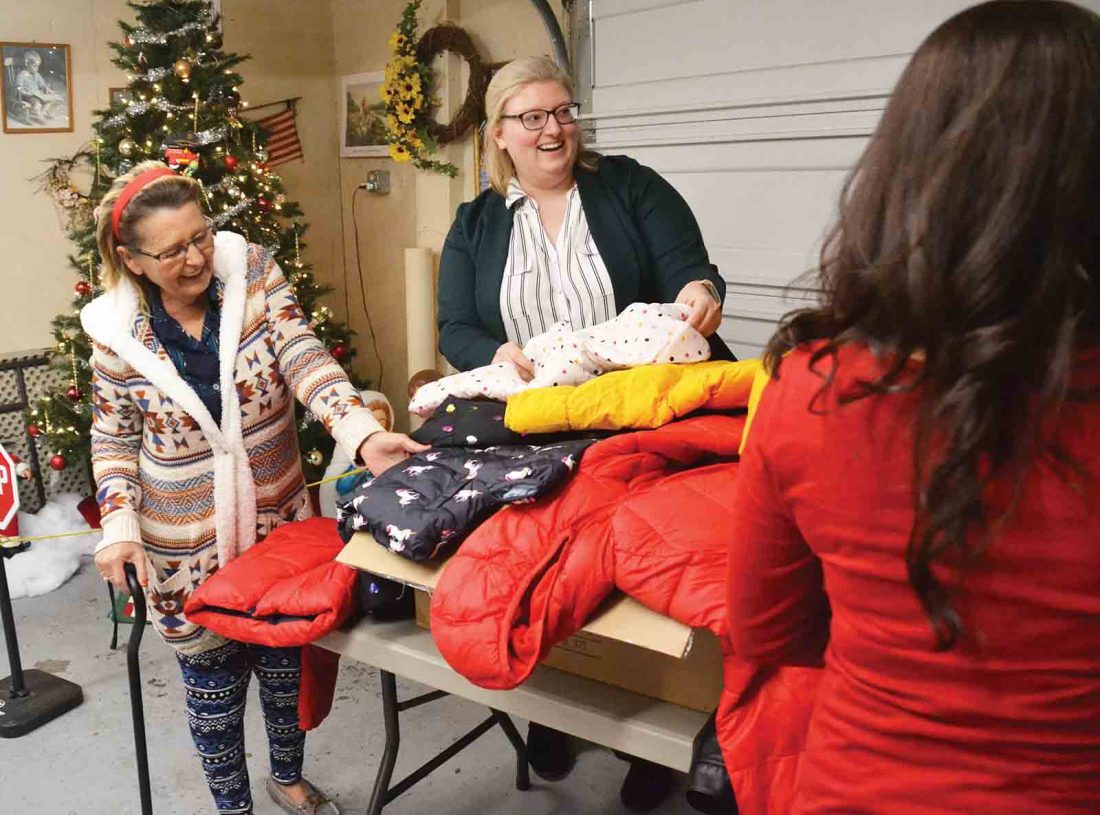 Gospel Mission director Candy Waite looks at children’s coats donated to the mission Monday by employees of Peoples Bank. The bank undertook a fundraising campaign that raised enough to purchase 100 coats, which were contributed to four charitable organizations. (Photo by Michael Kelly)

MARIETTA – Scores of children in Washington and Wood counties will have some extra protection from winter weather thanks to an effort by Peoples Bank.

On Monday, a group of representatives from the regional bank distributed 100 children’s coats in a range of sizes and styles to four charitable institutions in the two counties.

“There are a lot of children who walk here from school who don’t have coats at all,” Gospel Mission director Candy Waite said as 25 coats were delivered to the mission on Lancaster Street. The mission is about half a mile from Harmar Elementary School on Marietta’s impoverished west side.

“You and the Lord get the glory, praise and thanks for this,” she said.

Peoples Bank marketing and communications director Callie Witkowsky said the project is a reflection of the bank’s commitment to its home communities in Appalachia.

“It’s our way of spreading the warmth,” she said. “We partnered with Old Navy on this, shopped at their store and bought 100 coats to give away.”

Witkowsky said the funds were raised by bank employees, who decided on four agencies that could best distribute them.

Ashley Brown, a member of the Peoples group, said the idea began two weeks ago and immediately took hold with the bank workers.

“It just poured in. Within two days, I had about $2,500 on my desk. We decided on agencies that have the most direct impact on young people,” she said.

Waite said the coats will go to good use.

“This is going to touch so many lives,” she said, looking at the boxes of winter gear. “Look, they all have hats that are attached, what a blessing.”

Dozens of children come to the Gospel Mission daily, many of them seeking food to take home, and many of those looking for food they can prepare themselves.

“It’s sad to see, but they come in here in this weather without gloves, without hats, without coats, some even don’t have socks,” she said.