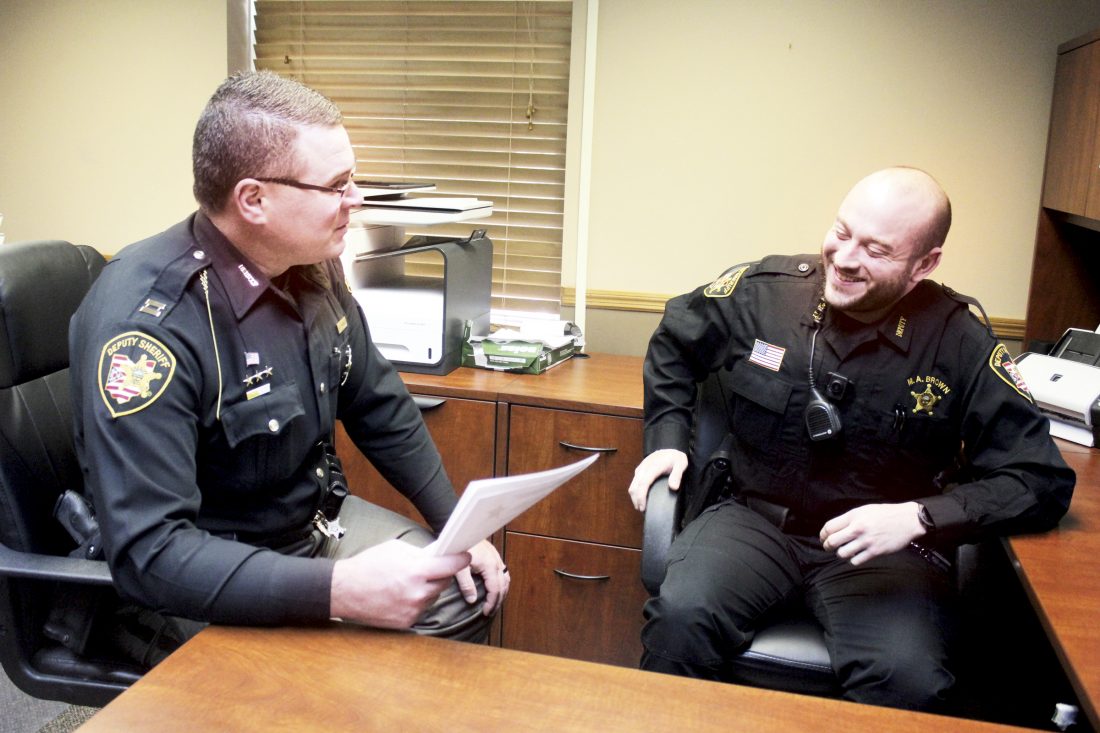 MARIETTA — There’s a standard uniform the public is used to when thinking of law enforcement.

“Typically in uniform, being a para-military organization, we present with a clean-shaven professional face,” said Capt. Brian Rhodes, of the Washington County Sheriff’s Office. “The public gets used to that sight.”

But behind the uniform are deputies, corrections officers, detectives and dispatchers who go home to family and friends celebrating and suffering through humanity just the same.

To share that humanity, the sheriff’s office has for a few years sported pink badges during October. Now this year, they’ve added facial hair temporarily to the uniform this month, celebrating No-Shave November.

No-Shave November is a national awareness and fundraising movement to highlight the struggles of those battling cancer.

“We get a lot of people who come up to us during October, some who are breast cancer survivors themselves, others who have lost someone to breast cancer and they tell us how much it means to them to see us wearing pink,” said Rhodes. “So this year, Sheriff (Larry) Mincks authorized our guys for a $25 donation to be allowed a neatly trimmed beard or goatee.”

Before Deputy Mathais Brown started his law enforcement career, he was used to the full-beard style.

“But I’ve been in law enforcement for four years, I kind of missed it,” he smiled. “It’s nice to get to grow this out again, even if it’s just for a month.”

In all, the office had 33 deputies participate in the fundraising effort, sending $825 to the Memorial Health Foundation Friday for the Strecker Patient Emergency Fund.

According to Memorial, the fund is somewhat of a catch-all.

“We had never done this before, but want to make it an annual tradition,” explained Rhodes. “So, I requested one of the deputies to go up to Strecker and find out if they had a way for us to donate.”

The fund is used to assist local cancer patients who are unable to maintain quality of life due to financial constraints.

“We know bills can get just so expensive, so having roughly a third of our agency make a donation–we hope to do our part to help,” said Rhodes.

* No-Shave November is a month-long journey during which participants forgo shaving and grooming to evoke conversation and raise cancer awareness.

* Support the cause by making a donation: no-shave.org/donate.