The featured speaker at the Veterans Day ceremony Monday at Parkersburg City Park was Jeff Elkins of Jackson County, a veteran of the U.S. Navy who enlisted in December 1976 and retired as a master chief in 2008. (Photo by Brett Dunlap)

A woman on the Blennerhassett VFW Post 1212 float in the Veterans Day Parade Monday from Parkersburg High School to Parkersburg City Park. (Photo by Brett Dunlap)

Lisa Small, commander of VFW Post 1212, was the master of ceremonies Monday at the Veterans Day ceremony at Parkersburg City Park. (Photo by Brett Dunlap)

A color guard of local veterans fronted the parade down Washington Avenue to City Park Monday as part of Veterans Day activities in the area. (Photo by Brett Dunlap)

Area veterans, their families and members of the community gather Monday at Parkersburg City Park for the ceremony to commemorate Veterans Day and those who served. (Photo by Brett Dunlap)

Wreaths were laid at the veterans memorials Monday at Parkersburg City Park by local veterans auxiliaries during a Veterans Day ceremony. (Photo by Brett Dunlap)

A military helicopter does a flyover at the Veterans Day ceremony at Parkersburg City Park. (Photo by Brett Dunlap)

The Jackson Middle School Choir, directed by Kristen Allodi, gets ready for its performance on Monday during the Veterans Day observance in the city of Vienna. (Photo by Jess Mancini)

Cub Scouts from Pack 104 at Vienna Baptist Church lead the crowd in the pledge of allegiance during the Veterans Day observance in Vienna. (Photo by Jess Mancini)

Dave Flinn, manager of Lowe’s in Vienna, accepts a certificate from Mayor Randy Rapp recognizing the company for its service to veterans. The Veterans Day observance was held Monday at the Gold Star Families Memorial at Spencer’s Landing. (Photo by Jess Mancini)

Scott Kirby, a Vienna native, state commandant of the West Virginia Marine Corps League, was the featured speaker at the Veterans Day observance in the city of Vienna. (Photo by Jess Mancini)

Ray Linch, a veteran of the U.S. Army from World War II, attended the Veterans Day observance at the Gold Star Families Memorial at Spencer’s Landing in Vienna. Linch is among the Vienna veterans memorialized on the monument. (Photo by Jess Mancini) 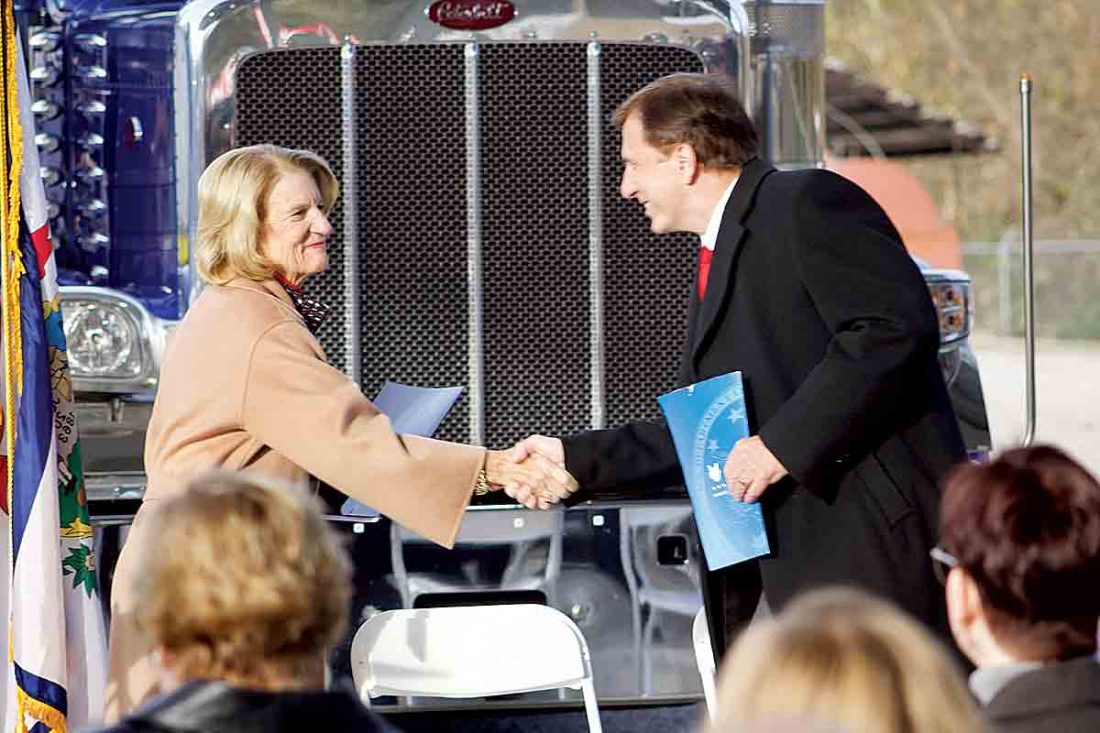 SCOTT DEPOT — Flanked by red, white and blue Peterbilt semi-trucks, more than $7 million in federal grant funding for infrastructure projects around the state was announced Monday in an awards ceremony in Putnam County by U.S. Sen. Shelley Moore Capito, R-W.Va.

“We’re announcing today another substantial round of projects,” Capito said. “We have people who have driven quite some ways to be here on Veterans Day to get the good news and get the check.”

Capito was joined by John Fleming, assistant secretary of economic development for the U.S. Department of Commerce, to award funding for eight projects in West Virginia totaling $7,049,375.

“We couldn’t do it without the help of folks like Carol Miller and Congressman Mooney and (1st District Congressman David) McKinley and Sen. Manchin,” Capito said. “We need our whole delegation to pull it together, because for a small state you’ve got to get your voice a little bigger and broader every time.” 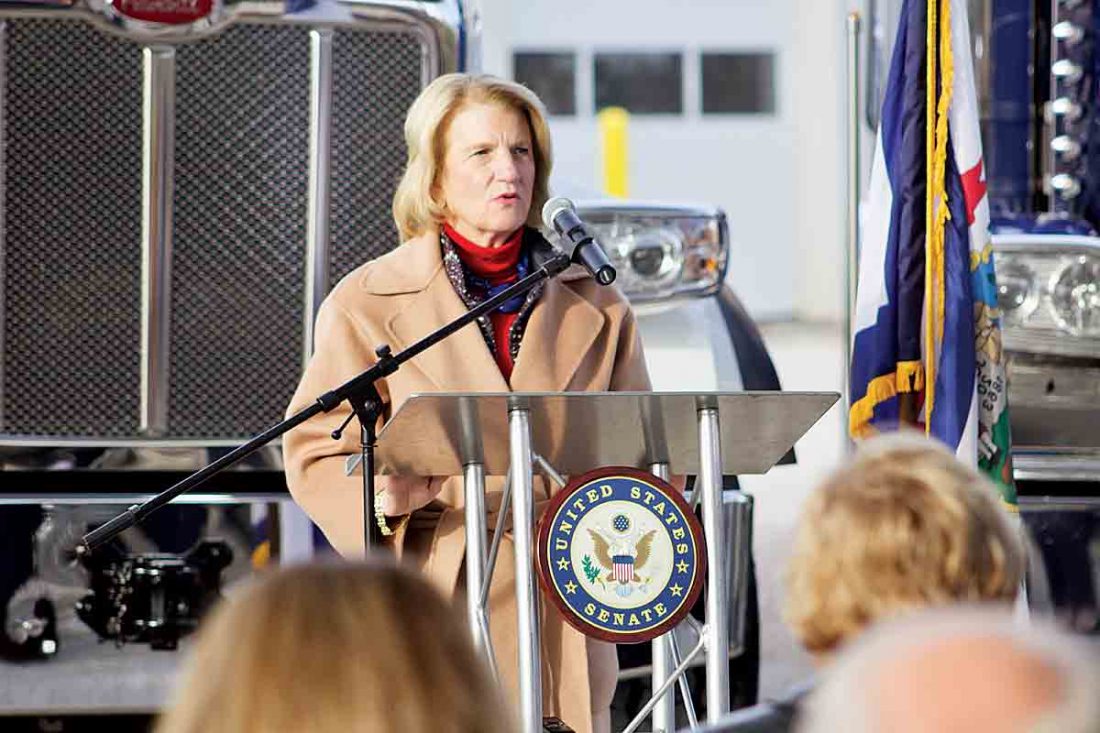 ∫ $2 million for the city of Philippi for sewer infrastructure.

∫ $1.2 million for the town of Capon Bridge for sewer infrastructure.

∫ $860,000 for the Putnam Public Service district for sewer infrastructure.

∫ $150,000 for the Eastern Panhandle Regional Planning and Development Council to design and engineer roadway and other infrastructure improvements needed to open 526 acres of land to manufacturing and commercial development and the expansion plans of the local community college.

∫ $57,375 for the Marshall University Research Corporation in Huntington for the Robert C. Byrd Institute to complete a regional workforce analysis.

Fleming, the director of the U.S. Economic Development Administration, said the $7 million is being matched by $4 million in local and state dollars, as well as additional federal investment. He also said these projects would create or retain more than 1,200 jobs and bring in $380 million in private investment.

“What we typically do is invest money into public works in order to remove obstacles to private sector investment,” Fleming said. “Our job is to make other people spend their money to create jobs for you and to improve your community’s economy.”

Capito said her interest in EDA grant funding came about after a meeting with EDA officials in the administration of former president Barack Obama. She said she was surprised to learn how little in grant funding the state received from the program.

“They showed me this is all the dollars you’re getting for West Virginia for EDA, and I just looked at it and I said I’m sorry, but that’s not enough,” Capito said.

Since then, Capito has worked with the EDA to help get grant funding for infrastructure projects in the state.

“We’ve been able over the last several years to impact 48 counties, create 4,000 new jobs, and retain about 1,800 of our former jobs,” Capito said. “Whether it’s infrastructure improvements, workforce training, management programs, and efforts to support our entrepreneurs – our jobs of the future.”