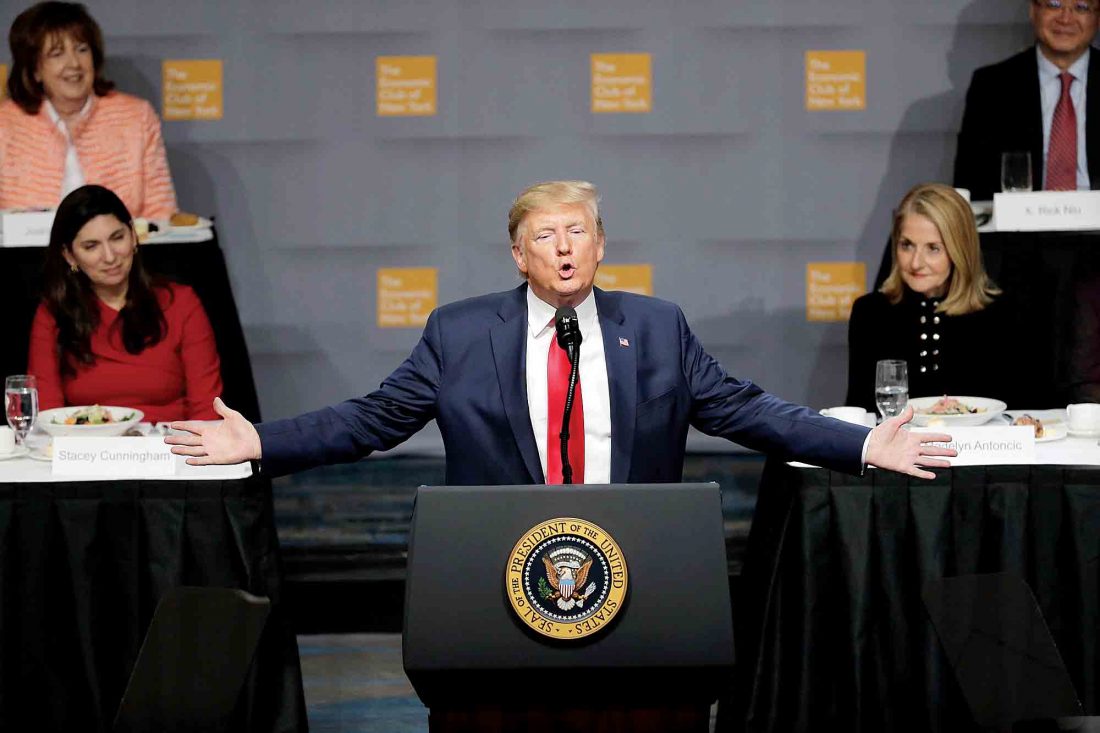 President Donald Trump speaks during a meeting of the Economic Club of New York in New York, Tuesday. When the gavel strikes at the start of the House hearing this morning, America and the rest of the world will have the chance to see and hear for themselves for the first time about President Donald Trump’s actions toward Ukraine and consider whether they are, in fact, impeachable offenses. (AP Photo)

CHARLESTON — With the start of the public impeachment inquiry today of President Donald Trump, one of West Virginia’s U.S. senators said she will be watching with interest.

The House of Representatives voted Oct. 31 to formally begin the impeachment process for Donald Trump. He is accused of withholding arms aid to the Ukraine in exchange for the Ukrainian government announcing an investigation into former vice president and 2020 Democratic presidential candidate Joe Biden and the business dealings of his son, Hunter.

If Trump is impeached by the House, the U.S. Senate would either have to convict and remove Trump as president or acquit him.

“I’m certainly going to be on Capitol Hill on Wednesday and as much as I can with the duties that I have I’ll probably be tuned in to some of the hearings,” Capito said. “Eventually it’s going to come over to the Senate I think, and then we’ll have to make our judgments there.”

The formal impeachment inquiry comes after Republicans in the House complained about several closed-door depositions with witnesses regarding a phone call between Trump and Ukrainian President Volodymyr Zelensky on July 25 about the Bidens. A whistleblower filed a complaint about the contents of the phone call, leading to investigations by several House committees.

House Speaker Nancy Pelosi, D-Calif., held a vote Oct. 31 to approve a resolution that includes rules and procedures for how a public impeachment inquiry will operate a week after some congressional Republicans, including Rep. Alex Mooney, R-W.Va., stormed into the secure room being used for depositions. The resolution passed 232-196 along party lines with all three of West Virginia representatives voting against the resolution.

“This has turned into such a political exercise,” Capito said. “That was obvious from the beginning when Speaker Pelosi moved forward with the vote…with the impeachment. We’ll see what information comes forward. From what I’ve seen, I think it’s just way over politicized. It hasn’t been fair, the presentation, but you know, there’s still information coming out.”

On Friday, the House Intelligence Committee will hear from Marie Yovanovitch, the former U.S. ambassador to the Ukraine. She alleges she was removed from her post due to pressure from Trump’s personal attorney, Rudy Giuliani.