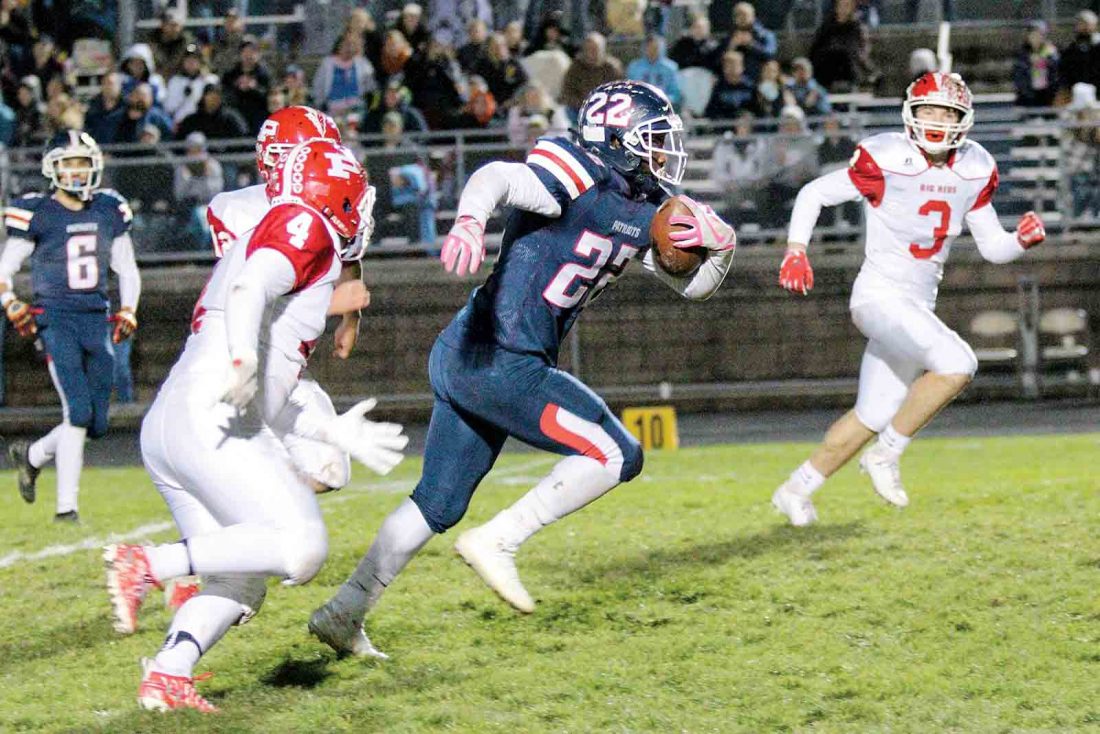 PARKERSBURG — Parkersburg South head coach Nate Tanner was blessed for missing the discovery of the answer to an eventually inevitable question through the first eight games of the season — how would his team handle losing a football game?

The 8-0 start, while great, just didn’t tell him everything he would need to know about his football team.

It was better for him to figure out the answer now then next week.

And it was an emphatic response to the defeat at Wheeling Park one week ago.

The option to sulk simply wasn’t a choice. 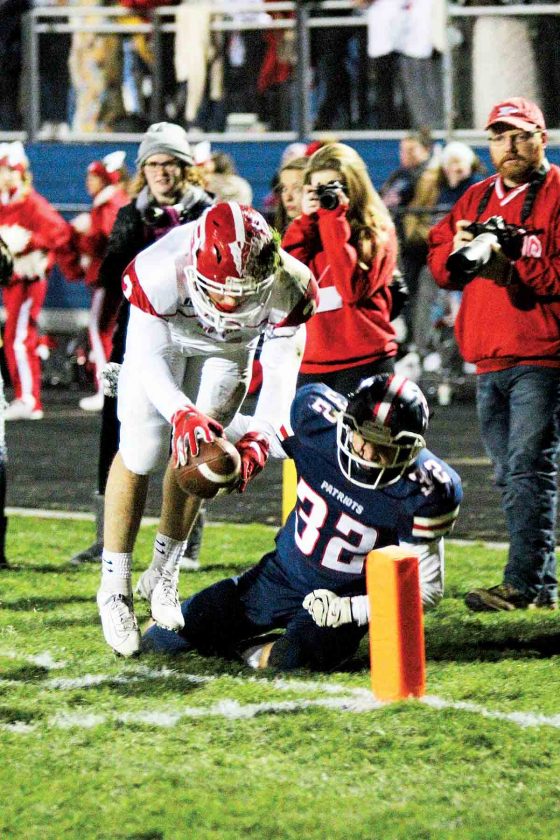 His Patriots forced seven PHS turnovers then converted five of those into 35 points during a 49-14 pounding of their cross-town rivals Friday evening at Erickson All-Sports Facility.

The victory sends the projected fourth seed into an unofficial playoff game against thirteen seed South Charleston on a high note.

“We just wanted to come out and show the state no matter what type of adversity comes our way we can still do what we do,” said Patriot quarterback Brandon Penn.

The senior signal-caller added to his Kennedy Award statistics with a standout performance on both sides of the football. Not only did he contribute to four of the Patriots’ touchdowns on offense, but he added a 30-yard fumble recovery for a score at the beginning of the third quarter.

His high-stepping defensive score 12 seconds into the second half came sandwiched in between snaring his second and third interceptions. He added 98 yards on the ground and completed 14 of 22 passes for 196 yards.

Big Reds’ quarterback Bryson Singer experienced a much rougher go at his position. Outside of scoring passes to Sam Potts and Matt Curry, the PHS player completed just seven of 22 passes and was responsible for all five interceptions. Singer also led PHS in rushing with 35 yards on 12 carries.

It was his 13-yard scoring connection with Potts that helped the Big Reds answer Devin Gaines’ 25-yard touchdown run with 11 seconds left in the first quarter, but then the trouble started for the visitors.

Mike Byus’ group kept making mistakes deep in Patriots’ territory. It didn’t hurt them in the first quarter, but this would soon change.

Once PHS started turning over the ball in the second quarter, South began the pullaway.

Penn’s 3-yard run at the end of a 15-play drive started an unanswered 42-point scoring burst between the second and third quarters. The scoring blitz catalyst came courtesy of Nathan Bentz’ interception on a 3rd and 4 as the Big Reds sat just past the midfield mark.

Tanner sat impressed with his group after the game.

“Football is a game of momentum like a lot of other sports, but anytime you can force turnovers and take the football and capitalize on it you are going to have a good day,” he said.

Capitalizing was something Byus wanted to see out of his team one week after a blowout loss to Huntington.

“We are just not playing well and we are net executing well and turning the ball over five plus times a game. And you can’t beat anybody like that. We can play with these guys. We just can’t keep turning it over,” said Byus.

“The second half the way we started we just got our heads down and it just snowballed and we made the same mistake the week before and corrected it during practice and came out and did it again.”

Musselman now unofficially awaits the Big Reds in the Eastern Panhandle. The loss means the Big Reds’ road to Wheeling is well … on the road.

Byus and company though aren’t dwelling on this outcome too much.

“We just have to keep our heads up and go back to work and figure out what our opponent does and prepare for it. Our coaching staff and myself are never going to stop working hard,” said Byus.

Joe Albright can be reached at jalbright@newsandsentinel.com