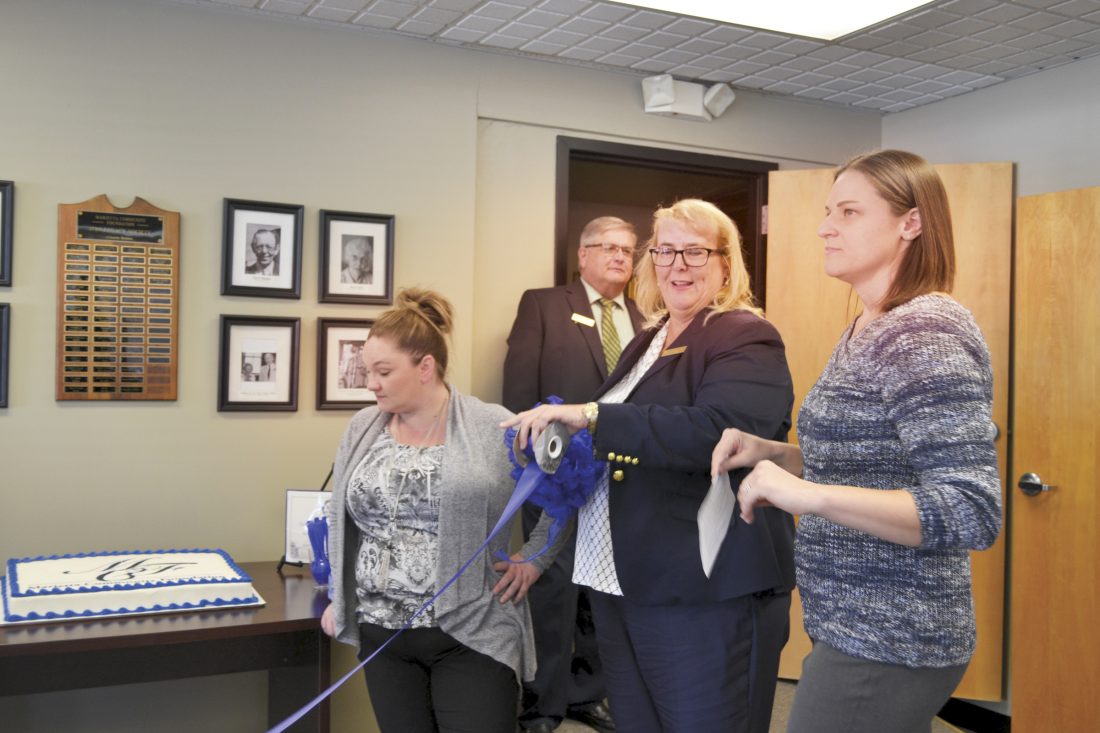 Getting ready to cut the ribbon at the Marietta Community Foundation’s 45th anniversary Friday afternoon were Britani Meritt, support services assistant, Sandy DeLong, chamber of commerce ambassador, and Heather Allender, president and CEO of the foundation. (Photo by Michele Newbanks)

MARIETTA — It’s been 45 years since the Marietta Community Foundation was established, but the foundation just keeps getting better, says those who keep it running.

As part of National Community Foundation Week, MCF held a ribbon cutting Friday at their Putnam Street office in celebration of the anniversary.

Heather Allender, president and CEO of the foundation, said the organization was part of a city project called the Restoration of ’76.

She said the foundation was dormant until the early 1990s, when Robert Kirkbride brought it to life.

“He was very instrumental in getting the board started and getting some processes identified,” Allender explained.

“We are Washington County, Ohio, and that’s all we service,” she said. “It’s really just meant to remove obstacles to charitable giving.”

The foundation is set up to help other nonprofits within the county.

“Any nonprofit that’s operating in Washington County, as long as they have their 501(c)(3), their registered nonprofit, then we can support them,” Allender said. “We do that through a competitive grant process.”

All of the money given back to the community comes from the foundation or from other donor dollars.

“To date, we’ve given $18 million back into the community,” she said. “That’s our dollars and other donor dollars, because we help other people give money too.”

She said they’ve given out a few notable grants in the last few years.

“A couple of years ago, we gave $25,000 to the O’Neill Center so they could expand their homemaker program. We’ve given $25,000 to Ely Chapman so they could purchase a new bus,” Allender explained. “Just recently, we gave a large amount to the Boys and Girls Club for their renovation project.”

She said not all grants are for large amounts of money.

“We give for anything,” she added. “We’ve helped volunteer fire departments buy equipment to better help with their services.”

Gary Williams, development director at the Ely Chapman Education Foundation, said they were happy to be granted $25,000 in 2016.

“For one thing, it’s provided a much more comfortable transportation situation for the kids,” he said, adding there are safety features on the bus.

“There’s not a chance that kids can be left on the bus, for example, with the alarm systems,” he noted.

He said the bus doesn’t require a driver to have a CDL and it is more reliable than their old bus.

“It doesn’t break down like the old one, which had many years and many miles on it,” Williams added. “It was a wonderful gift from the Marietta Community Foundation.”

He said the foundation is important to the community.

“They have been a great supporter, not just of us, but other nonprofits in the area,” he said. “We really appreciate the donors and administration and staff at the foundation. They are so important to nonprofits like us.”

Allender said they not only give back to the community, but they help other donors give back.

“Our vision is that every single person in Washington County is as generous as they can be,” she explained. “We want to remove those obstacles. We try to manage their charitable giving for them. We do research for them, making sure they are giving to organizations that are legitimate.”

There are two sides to the donation process. Some money is given to directly help the community, but some donations directly support the foundation.

“If someone says ‘here’s $100 to help the community,’ 100 percent of that goes back into the community,” Allender said. “But we also have donors and supporters in the community that support our work. We’re a nonprofit too.”

There are five types of charitable funds through the foundation.

The donor advised fund is a way to give to a nonprofit anywhere in the country. Scholarship funds are given to any student or to a student going to a school or university of your choice.

The third kind is a designated fund, which will support a nonprofit you select with no end date for the donations. The fourth kind is a field of interest fund, which allows the donor to give to a specific interest. If the donor doesn’t know where the money should go, they can donate to the unrestricted fund, where money goes to the most in need nonprofits.

Allender said there is an operating fund called Friends of the Foundation Funds that are used solely for the foundation’s operating costs.

Some of the charitable giving is through legacy giving, such as giving through estates, but there are some who donate year-round.

“We live in a generous community, so we have people give at year’s end, around this time,” Allender explained. “If you give now, you can actually see your money at work. Generally, people are just generous. We’ve built a lot of trust and credibility in the community. They see what we do and they like it. They want to support it.”

The foundation has also been generous in giving back to Washington County.

“We’ve been averaging about $1 million a year in giving,” Allender noted.