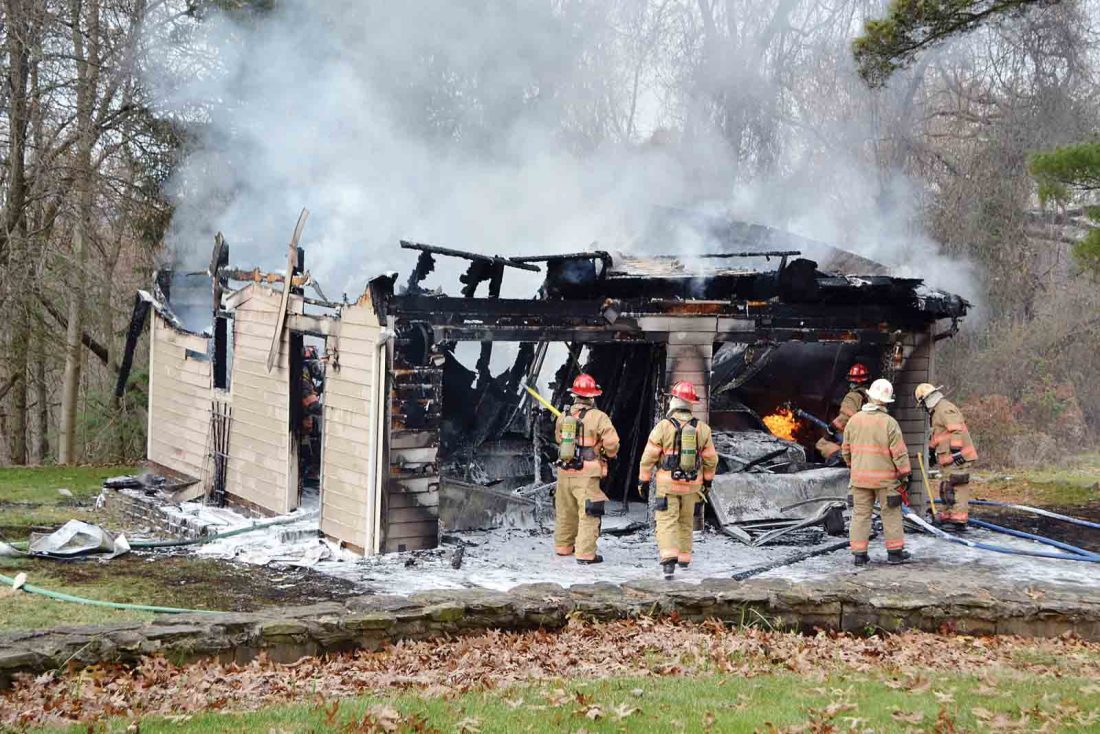 Firefighters from three Marietta fire stations put out the last of the flames from a garage fire Tuesday afternoon at 1225 Glendale Road. Two vehicles were lost in the blaze. (Photo by Michele Newbanks)

MARIETTA — Nancy Lee had returned home and was sitting down in her living room when she heard a bang Tuesday afternoon.

“I just got home, put the car in the garage, went and fed the cats, came into the living room and sat down when I heard a bang,” she said. “I stood up and could see the flames billowing at that point.”

She said she rushed outside and called 911, around 2:20 p.m. In a short amount of time, Marietta firefighters from station 3 were pulling up to 1225 Glendale Road.

She explained she had parked on the left side and left the garage door open, as her garage door remote didn’t work. The right side garage door was shut where her husband, William, had his car parked.

“I was thinking about the poor outside cats having their lunch,” she said, adding the cats were on the other side of the house when the blaze broke out. “I’m sure it startled them.”

Lee said when she talked to the firefighters, they told her how fortunate it was that there was distance between the house and the garage.

Marietta Fire Chief C.W. Durham said when there is a report of a structure fire, firefighters from all three Marietta stations respond.

He said it only took about 20 minutes to contain the fire.

“We had to overhaul to make sure there were no hot spots,” he explained.

Durham said they will investigate as a routine measure to determine where the fire started.

“We always try to determine where the origin of the fire was,” he said.

Lee said the garage was no more than 20 years old and they didn’t keep anything out of the ordinary in it.