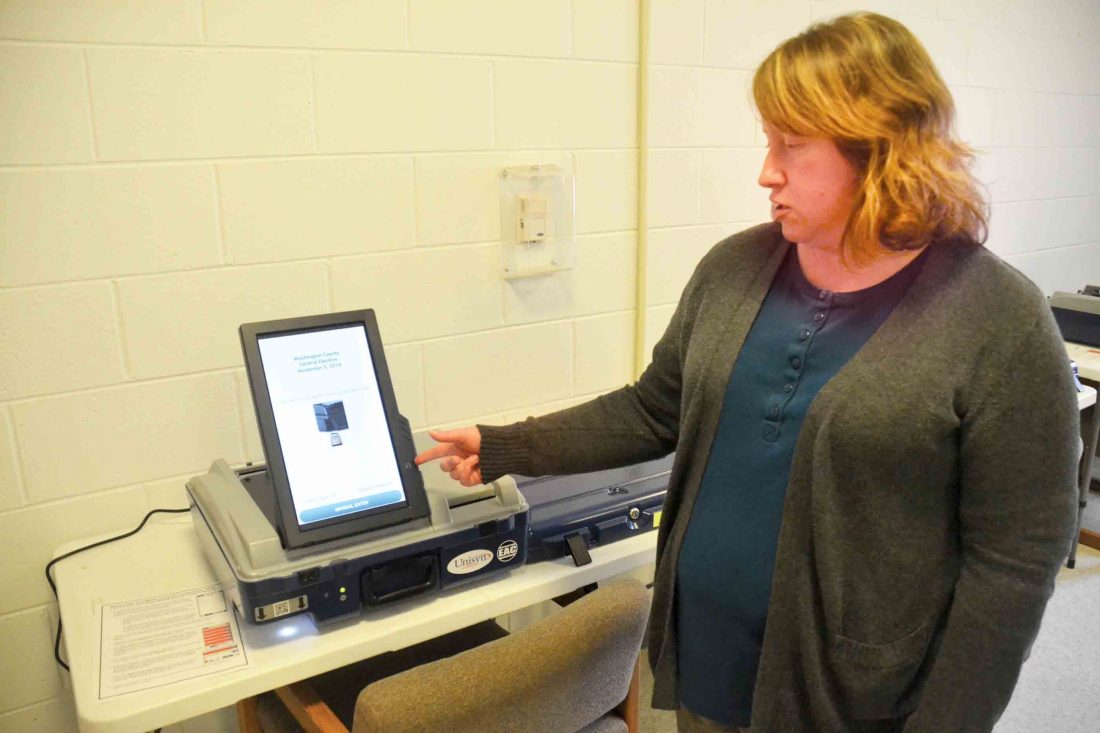 Washington County Board of Elections director Mandy Amos points out the features of the county’s new voting machines. Early in-person and absentee voting began Tuesday for the Nov. 5 election, which includes a contested race for mayor and a levy proposal for Marietta City Schools. (Photo by Michael Kelly)

MARIETTA — By the end of the day Friday, about 175 people had cast early in-person ballots at the Washington County board of elections office on Davis Avenue. It was the fourth day of early voting, and elections director Mandy Amos said the traffic was about average for an odd-year election that is all local issues and candidates on the ballot.

“It’s been steady, one person goes out and another comes in,” she said.

Darrell Huck walked in with about an hour left in the day’s polling. He handed his identification to an elections worker, who pulled up his data from the digital pollbook and handed him a small slip of paper bearing the imprint of a QR code.

Another worker took him into an adjoining room with about a dozen of the county’s new voting machines and took him through the process: a small code-reader blinked when the QR code was held under a corner of the device, which is about the size and shape of a large briefcase. When the code registered, Huck’s ballot came up on the screen. It was then a matter of touching circles on the ballot, reviewing choices and getting a printout, slightly wider and longer than a receipt issued by an ordinary sales till at a market.

The finished ballot paper is then fed into an optical scanner, which registers the voting information.

Huck said he’s a candidate for trustee in Fairfield Township.

“Everyone would like paved roads, but that’s not possible with our budget,” he said. “We do the best we can with what we’ve got.”

On the importance of voting, Huck said it’s essential.

“It’s important everyone votes. People complain about things, but they need to get out there and get involved,” he said.

Much is new in the back end of the voting process, Amos said, but the part where it meets voters is simple, easy and reliable. The county has new voting machines and new ballot readers, and a new pollbook system to generate the QR codes, which automatically determines the correct ballot for each voter. For voters, it’s a matter of checking the right circles on a touch-screen, then verifying the results and printing out the paper receipt for insertion in the scanner.

Steve Brown, a teacher at Putnam Elementary School who lives in Marietta, came in with his 5-year old son Aaron. After using the machine, he let Aaron feed the paper ballot into the reader, which sucked it through a slot when it sensed the top edge of the paper coming in.

“I’m here mainly to vote for the school levy,” Steve said. “I’m both a teacher and a parent.”

As Aaron tested out the “Ohio Voted” sticker on his arms and various places on his face, Steve said he usually votes for candidates based on a track record.

“I want city government to be doing its best for the citizens, and for candidates to follow through on their campaign promises,” he said.

Amos said the voter list for the county was purged earlier this year for the first time since 2015, with 1,501 names coming off, primarily people who have moved away from the area. Purges were normally done in odd-numbered years, she said, but suspended for a period following a court decision. Voters are notified by mail when their status as a registered voter in the county comes into question and can reply to remain on the list, she said.

The office, she said, had received 325 requests for absentee and mail-in ballots.

Early in-person voting will remain available through Nov. 4, including both the Saturday and Sunday before Election Day.

Paula Ryder, a Harmar Hill resident, came in to cast a ballot near the end of the day Friday.

“It’s convenient for working people. I have 10-hour shifts, so it’s easier than trying to get away on Election Day,” she said.

She didn’t have any particular issues that brought her to the polls, she said.

“For the mayor and council, I just want them to put the city and its people first,” she said.

* Location: Washington County Board of Elections office, 204 Davis Ave., Suite B (entrance at lower level in back)

Source: Washington County board of elections