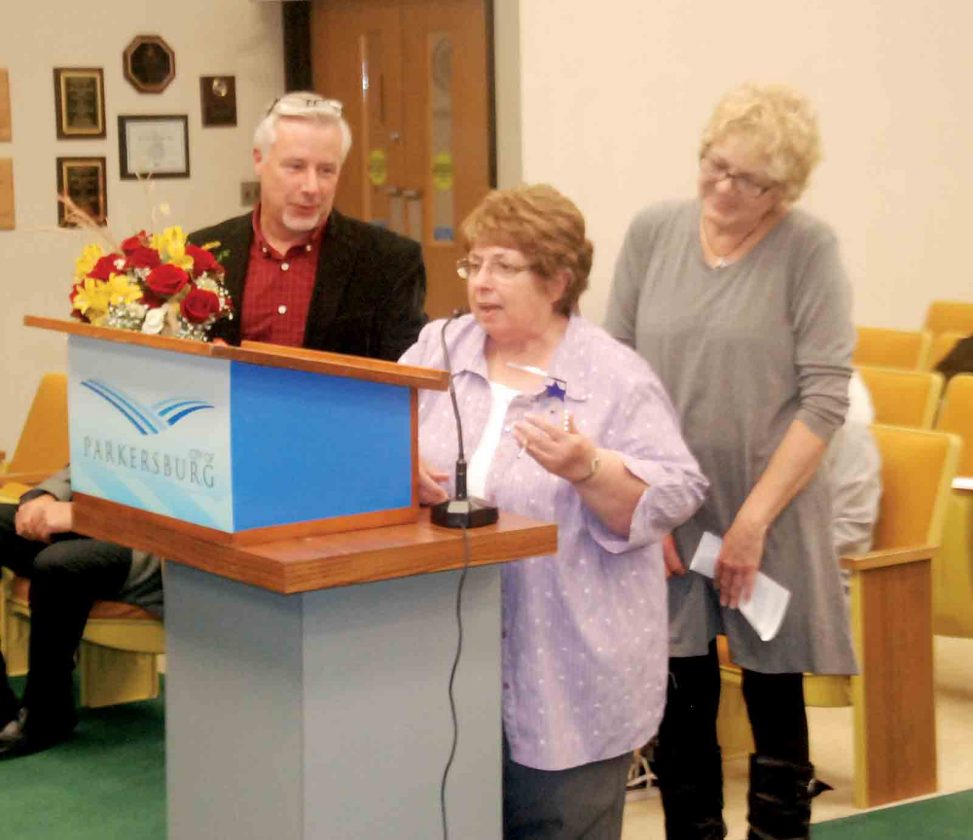 Parkersburg City Clerk Connie Shaffer, center, speaks after being given a bouquet of flowers as part of an “Above and Beyond” award presented by Dan Stevens, left, pastor of Bible Baptist Church, and Debbie Jeffrey with the Ladyburgs Plus One volunteer group during Tuesday’s City Council public forum. (Photo by Evan Bevins)

PARKERSBURG — Funding for a pilot program aimed at helping homeless individuals travel to where they have family and support systems was approved by Parkersburg City Council Tuesday, along with the first reading of an ordinance trading a cannon to Wood County for its half of a downtown park.

Council approved four resolutions allocating $864,417 in unappropriated carry-over funds from the 2019-20 fiscal year on a single 8-0 vote, which covered an additional $442,589 for purchase orders that were outstanding when the previous fiscal year ended on June 30. That came after an amendment to allocate $12,000 for a new fence around the tennis courts at Southwood Park, which also passed on an 8-0 vote with Council President Mike Reynolds absent.

Among the allocations was $10,000 to work with Westbrook Health Services to reunite homeless individuals with out-of-town family by providing them transportation.

Councilman Eric Barber asked Mayor Tom Joyce if he had any idea how many people could be assisted with the money. Joyce said he did not want to speculate.

“This is a pilot. Let’s take a look and see what, if any, in-roads can be made,” the mayor said. “Let’s see if we can make an improvement in some individuals’ lives.” 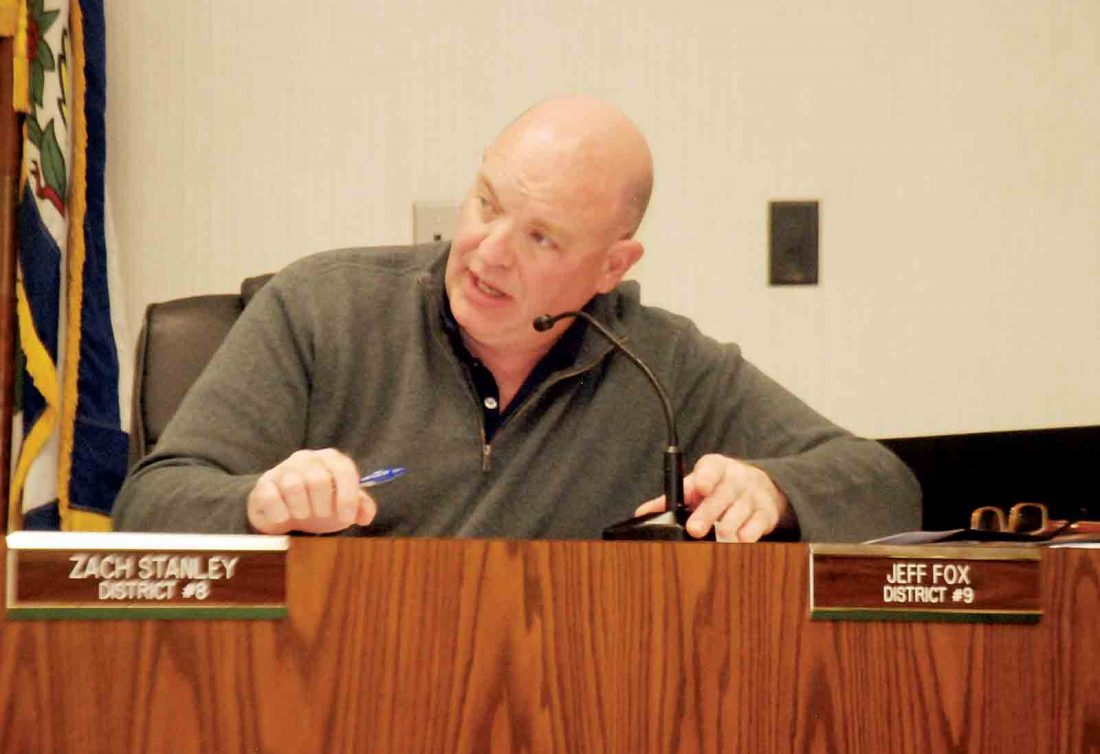 Joyce said if a person is willing to seek help and he or she has loved ones willing to assist them in Alaska, he’d be in favor of helping them get there.

During the public forum portion of the meeting, Parkersburg resident Ed Hurst said he supported the idea of the program, for those who legitimately want help.

“There are homeless throughout Wood County that need our help,” he said. “There are also those that want our help because they don’t want to do anything else.”

“I think it’s a great idea, especially if they’re involved in drugs here,” she said. “We already do that, and we would use those funds to do that.” 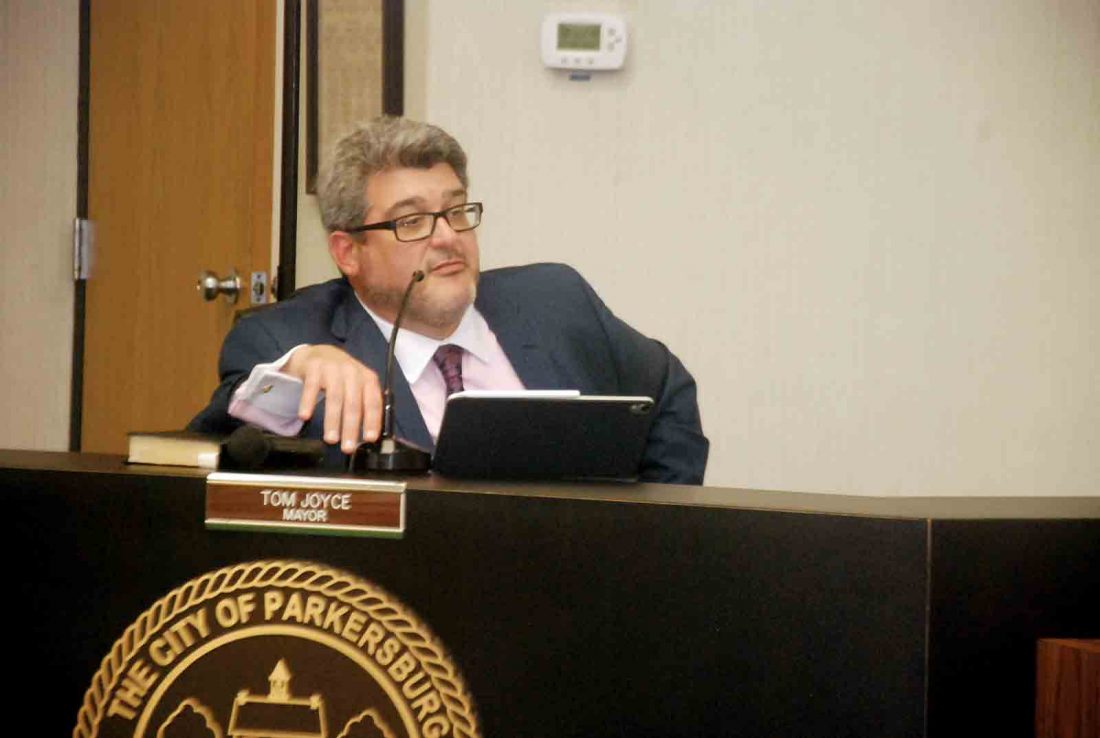 After the meeting, Joyce said the city is only working with Westbrook on the program at this point, noting they have employees trained to assist homeless individuals.

“It’s a collaborative effort between the City of Parkersburg, our Police Department, Fire Department … to work with Westbrook,” he said.

Multiple people spoke during the public forum about the need to address homeless issues, as well as crime and drugs in the city.

Council voted 8-0 to pass the first reading of an ordinance transferring the Civil War-era “Long Tom” cannon that has been in City Park for nearly a century to Wood County, which would put it back at Fort Boreman Park. In return, Parkersburg would get county property adjacent to Bicentennial Park, giving the city full jurisdiction over that facility.

“I don’t understand what’s taken the city so long to take control of this park to begin with,” Councilman J.R. Carpenter said.

Barber said he heard from a resident opposed to the trade and initially had his own reservations about it. But he said it made sense to return the cannon to where it belongs.

Barber cast the lone vote against the final reading of an ordinance approving the city’s purchase of a house at 1201 Smithfield St. for $150,000, where a retaining wall failed eight months ago, blocking access to the garage. The proposed repair will prevent the garage from being used for parking in the future, so the city offered to buy the house, along with providing $1,915 in relocation assistance and as much as $3,000 to purchase the vehicle homeowner Roger Lockhart bought to use in place of the car still trapped inside.

Councilwoman Sharon Kuhl asked what the city will do with the house after the purchase. Joyce said it would be up to council but one option is to turn around and sell it.

“First thing we’re going to do is fix the wall that’s been in the middle of Smithfield Street since February,” he said.

At its Oct. 8 meeting, council voted to table a resolution reconstituting the Urban Renewal Authority as a seven-member entity made up of one council member and six mayoral appointees confirmed by council, rather than all nine council members.

An attempt to bring it off the table Tuesday failed in a 4-4 tie, with Barber, Carpenter and Councilmen Dave McCrady and Jeff Fox opposed.

During the public forum, Debbie Jeffrey, with the volunteer group Ladyburgs Plus One, and Bible Baptist Church Pastor Dan Stevens presented City Clerk Connie Shaffer, who has worked for the city 47 years, with an “Above and Beyond” award in recognition of her positive attitude and dedication.

“Connie Shaffer goes above and beyond, and she is the epitome of a selfless servant to our city,” Jeffrey said.

“I want you all to know what an honor it is to have this position,” Shaffer said.