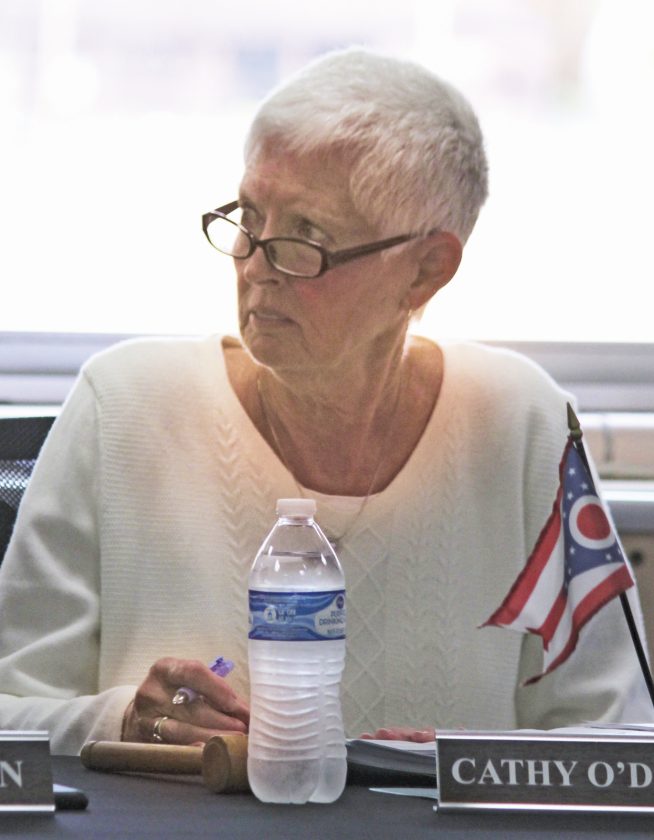 Photo by Michael Erb Belpre City Schools Board of Education President Cathy O’Donnell listens to comments during Monday’s board meeting. A local parent has asked the board to help address what she described as a surge of vaping and drug use among Belpre’s youth.

BELPRE — A parent has urged the Belpre City Schools Board of Education to take steps to curb vaping and drug use among the city’s youth.

The parent, who is not being identified for the safety of her children, spoke Monday to the school board, saying she recently became aware of a surge in vaping and drug use in the city’s schools.

“There is a fairly serious problem with vaping, both marijuana oil and nicotine, in the junior high and high school,” she said. The students providing these items also are involved in harder drugs and have threatened and pressured students into purchasing and using vapes and drugs, she said.

The parent said she also has found and documented numerous instances of students being violent toward other students and sharing videos of the attacks online.

“A lot of policies on bullying and interaction with the students, even the administration of discipline, these policies were written before social media,” she said. “I’m telling you, it is a different world. It is not the same.”

The parent said these students are effectively documenting their own crimes but lack any sense of accountability.

“They are dealing drugs, they are posting pictures of themselves doing drugs, they are bartering guns, and I never would have thought in a million years this is happening in Belpre,” she said. “I’ve committed a lot of time collecting evidence that it absolutely is.”

The parent said while she has contacted law enforcement, she is now asking for the school system to take steps to protect its students.

“I am looking for some help while also offering it,” she said.

Board President Cathy O’Donnell said the Ohio State Board of Education is reviewing the district’s “outdated” policies, and board members asked the parent to meet with them in executive session to discuss more specific incidences.

Michael Erb can be reached at merb@newsandsentinel.com