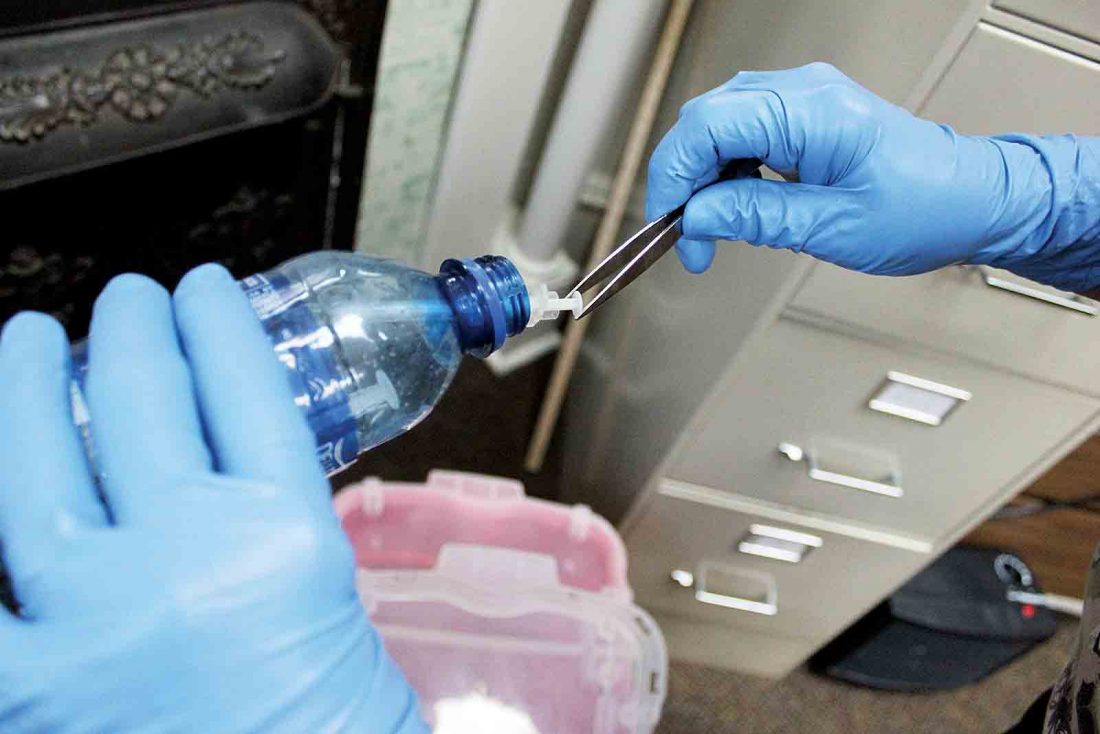 Nursing Director Val Betkoski of the Washington County Health Department removes needles collected by a drug addict from a water bottle Friday as part of the county harm-reduction program. (Photo by Janelle Patterson)

MARIETTA — Loss of money and failure can be scary concepts in government.

It took Val Betkoski, director of nursing for the Washington County Health Department, three years of reporting data and practice models from other portions of the country and state — like Zanesville and Muskingum County — before getting support to pilot a needle-exchange program.

“There’s a lot of stigma for harm-reduction programs both for those who most benefit from them and outsiders,” said Betkoski. “And even getting you to come in, many are still slow to trust.”

The purpose of the program is two-fold: removing potentially contaminated needles with HIV-AIDS, Hepatitis C and other infectious diseases from the hands of drug addicts and preventing further spread or inadvertent infection of a child; and increasing opportunities for and conversations about treatment.

Though the program began officially on May 16 on an outcomes-based contract with the Washington County Behavioral Health Board, the first needle wasn’t exchanged until Sept. 19.

“And that’s not unusual,” Betkoski continued, noting the track record of other similar programs. “We have to get people to trust us even to show up. Now we’ve referred one person hoping to start a treatment program for drug abuse, we’ve had one returner and a second who’s not quite comfortable talking about treatment yet and a third who’s still not interested.”

Usually, with local government, the monetary/in-kind labor donation model is regularly used to engage public support in product-specific projects– a new piece of equipment in a park, a new bench on the River Trail, a water fountain.

But what if the outcomes-based model of funding scaled up to partner local service organizations with both government bodies and investors to pay for social outcomes rather than things?

That’s the question Ohio Treasurer Robert Sprague posed on his visit to Marietta this week.

“One thing common in government is once you have a program, it’s hard to get rid of it–even if it’s ineffective,” said Sprague. “What we want though is programs that can prove results, that can move the needle and lower things like hepatitis C rates, overdose rates, recidivism in crime, things that ultimately cost the taxpayer a lot more money.”

On Wednesday, he promoted other programs out of the state office, too, but focused his private-sector background in finance on public applicability for investment in issues like the opioid epidemic.

“ResultsOhio would serve as a financial tool, but for better stewardship of taxpayer dollars because the only time the state pays is at the end if you’re successful meeting measurable goals,” he explained.

The concept of pay-for-success is used to spread the risk load between multiple investors in the private sector on a portfolio of projects–some see a return, others are taken as a loss.

“And we want the competition, we want to see programs try different models and gather that local buy-in first, that philanthropic and investor-class input at the front end,” said Sprague. “Right now, we don’t have that. Instead, we have a lot of transactions but not a lot of transformation.”

For the Washington County Health Department’s needle-exchange program, the six-month review is scheduled for November.

“But it took time to earn trust, and that’s not uncommon in the other places this program exists,” explained Betkoski. “To date, we’ve collected 27 needles, exchanging them one for one since the first needle was brought in on Sept. 19.”

Sprague said with the state tool, the first project contracted with his office will be a recidivism program in the Cleveland area, but he’s looking next to local governments for pitches to tackle their social issues creatively.

“We want to build a portfolio of projects, like in the private investment world,” said Sprague. “Failure is OK, that’s part of innovation…We’re not looking for a high batting average, but we’re looking for a home run.”

Measurables for social programming, Sprague said, have to be determined by both the state as an investor, the local up-front investors and the provider of a program.

And the applicability of the financial tool, he encouraged, isn’t siloed to drug abuse.

“There’s application to stormwater capture and release where you could measure the rates of pollution, there are ways to show student readiness in early childhood education–we want your creativity to convince your local foundations and investors first,” Sprague said. “Then, if successful, the state can pay back your investors, and if that includes nonprofit foundations, they often then reinvest those funds back into the community again.”

How does pay-for-success work?

1. A government organization defines outcomes to combat a social issue.

2. A provider raises money from investors who contribute the upfront cost to address the issue.

3. An outside evaluator verifies the outcomes were met by the provider.

4. If results are achieved, the government organization pays back the initial investors; if not reached, investors take the loss.