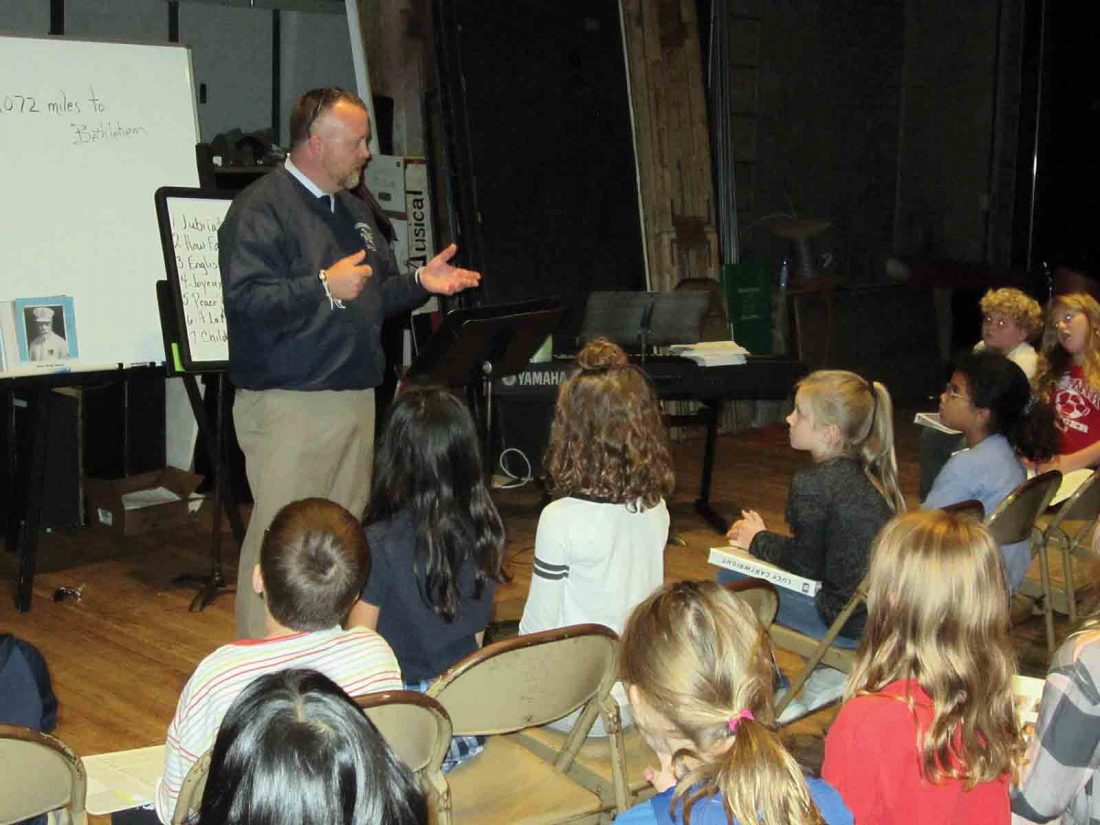 John Golebiewski, president and principal of Parkersburg Catholic Schools, speaks Tuesday to members of the Smoot Theatre Children’s Chorus about his experience attending a choir school for three years as a member of the American Boychoir. (Photo by Wayne Towner)

PARKERSBURG — Sometimes, singing in a youth choir is just a hobby that is fun — and sometimes it’s a commitment of time, energy and discipline with weeks and months spent away from home– but still fun.

Children participating in the Smoot Theatre Children’s Chorus were practicing Tuesday at the Smoot Theatre in Parkersburg. As part of their rehearsal, they also heard from a local educator with personal experience attending school at the same time he toured the country and the world as a choir singer.

John Golebiewski, 41, is president and principal at Parkersburg Catholic Schools and has lived in the Parkersburg area since 2017 with his family.

Smoot Director Felice Jorgeson said she asked Golebiewski to speak to the children about his experiences as a member of the American Boychoir School, which was based at that time in Princeton, N.J.

Golebiewski, a Wheeling native, spent three years attending the school, which has since closed, where he performed with the boychoir in an experience similar to that of thousands of boys who have performed with the historic Vienna Boys Choir in Vienna, Austria.

Jorgeson said the Smoot is giving free tickets to all of its youth choir members who want to attend the VBC concert.

Golebiewski said he can remember performing on the Smoot stage 27 years ago as a member of the American Boychoir, which was based on the Vienna Boys Choir model mixing education and performing.

“We came through here in 1992 on a tour of the Midwest on our way back to Princeton,” he said of the Smoot performance.

As a youth in Wheeling, Golebiewski was involved in choir and theater and said his life changed when he attended an American Boychoir concert in Buckhannon, W.Va. He decided to audition for the choir school and spent three years, from ages 12 to 15 or sixth through eighth grades, learning and singing.

While he spent much of that time away from home at the music-based boarding school, “it was an opportunity to maximize my musical experience, to test myself as a musician in music theory and performance and to travel the world, to travel throughout the United States, to perform at Carnegie Hall, Boston Symphony Orchestra, to perform at the White House for two presidents, to just have an opportunity to be part of something,” he said.

During the school year, Golebiewski said, the choir would be on the road much of the time with a mixture of studying, traveling, rehearsing and performing.

“It was a challenge but I think as with anything it was about discipline,” he said, adding mornings often involved academics, followed by rehearsals in the afternoon and performances in the evening.

After three years at American Boychoir School, Golebiewski returned to Wheeling where he graduated from Wheeling Central Catholic High School in 1997. He went to West Virginia University where he initially studied voice performance but later switched to pre-law before graduating in 2002 before entering the education field.

Golebiewski said music remains an important part of his life, but now is a private hobby. Most of his time is now spent with work and family but he may return to public performing in the future.

He spoke with the students Tuesday about the importance of music and the arts.

“There’s a lot of things people can learn from music that don’t necessarily coordinate with notes. There’s discipline, there’s determination, there’s flexibility, there are a lot of important character traits that you can take away and apply to just about any profession out there. Whether they are doctors, lawyers or whatever they may decide to be, music will be, I believe, a foundation that will help them be successful,” he said.