Medal of Honor recipient Hershel “Woody” Williams, right, speaks to employees of United Bank Wednesday at the bank’s headquarters as Vienna resident and fellow Marine Corps veteran Bernie Lyons laughs at one of his remarks. (Photo by Evan Bevins) 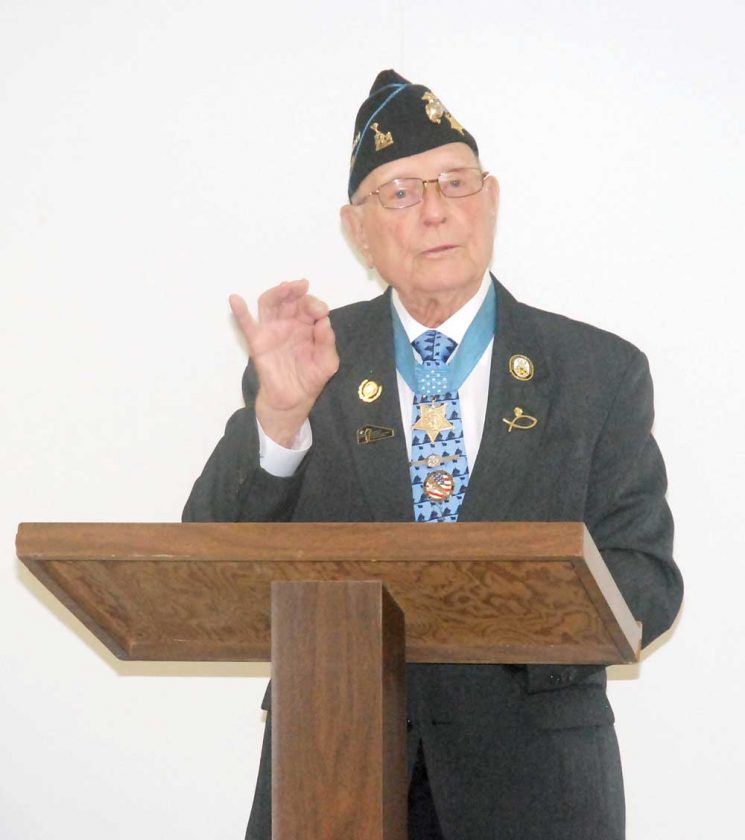 PARKERSBURG — The audience laughed at times and listened in somber silence at others as Medal of Honor recipient Hershel “Woody” Williams spoke to about 40 United Bank employees Wednesday afternoon.

In the area to address the U.S. Army Corps of Engineers at the Lafayette Hotel in Marietta, Williams — a West Virginia resident and the last living U.S. Marine to earn the Medal of Honor in World War II — stopped at the largest publicly traded company headquartered in the Mountain State to thank them for their contribution to the Gold Star Families Memorial Monument in Parkersburg City Park and discuss potential efforts to support other monuments.

At the invitation of United Chairman and CEO Richard Adams, who called Williams “one of the great heroes of our country,” he spoke to employees not about his accomplishments but about how he became dedicated to the cause of honoring Gold Star families, those who have lost a loved one in military service.

“A lot of people think it has to be (someone who died) in combat. But it doesn’t,” Williams said, noting those who died in training exercises or a plane crash still passed while serving their country. “The grief is the same. The hurt is the same.”

Williams’ nonprofit Hershel Woody Williams Congressional Medal of Honor Education Foundation Inc. works to encourage the establishment of Gold Star Families Memorial Monuments around the country. So far, there are 55 monuments in 42 states, with 61 in progress. 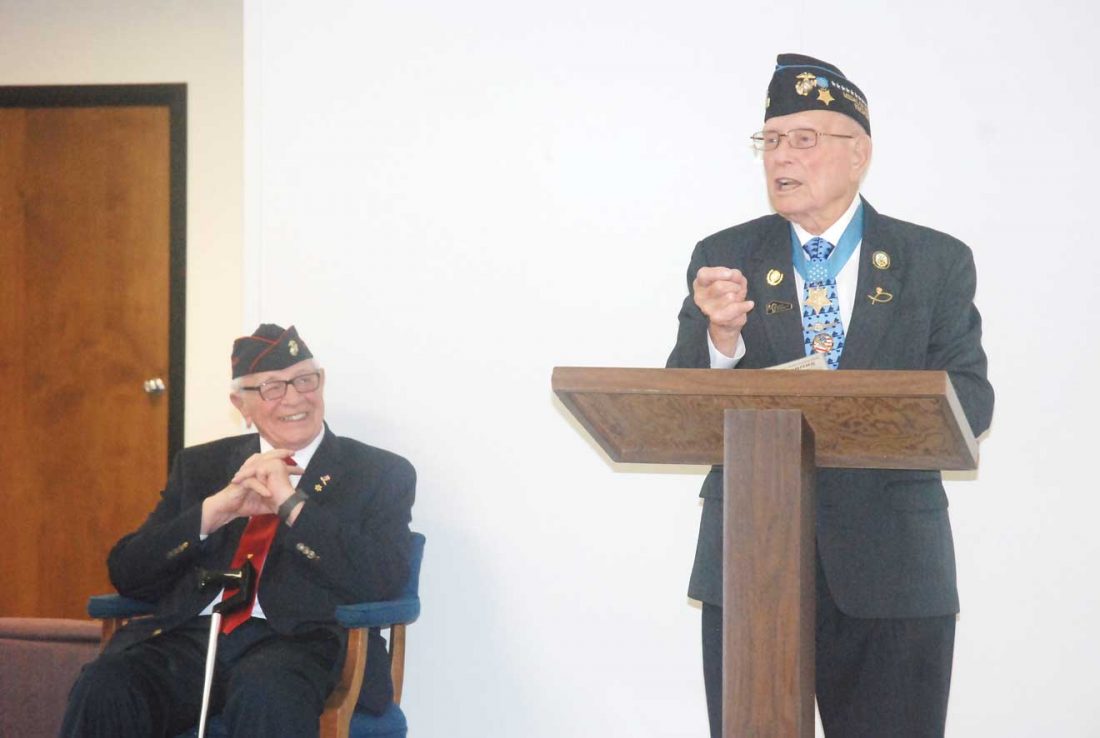 Medal of Honor recipient Hershel “Woody” Williams, right, speaks to employees of United Bank Wednesday at the bank’s headquarters as Vienna resident and fellow Marine Corps veteran Bernie Lyons laughs at one of his remarks. (Photo by Evan Bevins)

Williams elicited laughter as he talked about his efforts to join the military after the Dec. 7, 1941, attack by Japanese forces on Pearl Harbor. He said he was thwarted first by his mother, who wouldn’t sign a paper allowing him to enlist at 17 because “she was trying to run a dairy farm and she needed boys to milk the cows,” and then by the U.S. Marine Corps’ 5-foot-8 minimum height requirement. He said he chose the Marines over the Army because he’d seen his brothers’ Army uniforms and thought he had a better chance “to get the girls” in Marine attire.

They grew quiet as Williams recalled the time, before the height requirement was lowered and he enlisted, that he worked as a taxi driver. That job included delivering telegrams informing families that a loved one had been killed overseas.

“They already knew, the minute they saw that envelope, they knew what it was,” he said. “I’m a 19-year-old boy, very shy, very bashful, very timid. I didn’t know how to handle that.”

Those memories stayed with Williams over the years as he worked with the Veterans Administration for more than three decades. In 2010, he was part of a group establishing a new state veterans cemetery when he met a Parkersburg widower whose son had been killed in Afghanistan.

“He was the one who received the knock on the door. He had no one he could talk to,” Williams said.

That led Williams to the effort to establish the original Gold Star Families Memorial Monument at the Donel C. Kinnaird Memorial State Veterans Cemetery in Dunbar.

The son of a man who died in Vietnam learned about the concept online and started an effort for a similar monument in Valley Forge, Pa. A student at a boys school in Tampa, Fla., wanted to establish one there.

Williams attended the dedication of the 55th Gold Star monument in Arizona last week and is headed to Forks, Washington, this weekend for number 56.

Williams was joined at United by Vienna resident and Marine Corps veteran Bernie Lyons, who helped lead the efforts to build the Gold Star monuments in Parkersburg, Vienna and Marietta. Lyons was recognized last month by United as part of A Military Tribute at the Greenbrier, a PGA event.

Lyons and Adams met during fundraising efforts for the Parkersburg monument.

“They were the first ones to contribute to it,” Lyons said of United. “They’ve been very good to us.”