Donald Trump Jr. and Gov. Jim Justice greet the crowd at a political fundraiser for the governor Thursday. (Photo by Steven Allen Adams) 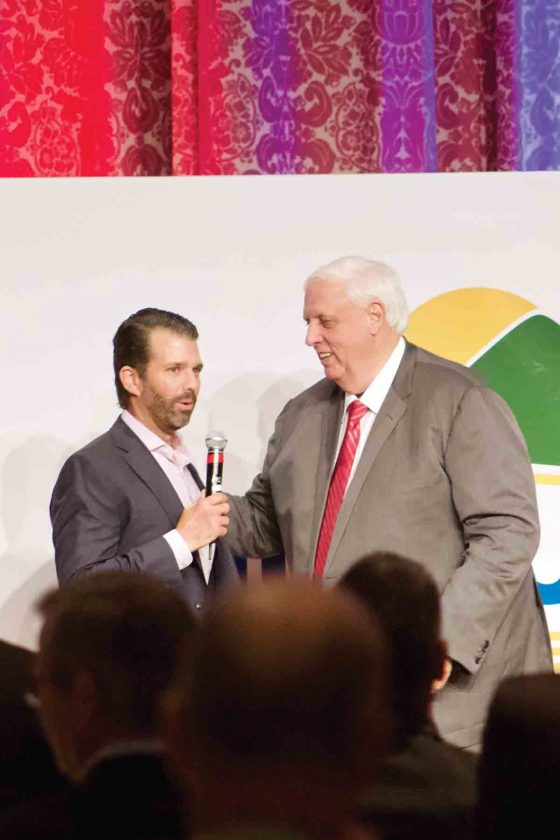 Donald Trump Jr. was the special guest Thursday at a political fundraiser for Justice, who is seeking re-election as a Republican in the May 12, 2020 primary. Trump Jr. was joined by his girlfriend, former Fox News analyst and Trump 2020 senior adviser Kimberly Guifoyle.

“It’s so important for you to help elect guys like Gov. Justice to this state. People who have signed the front of that paycheck, people who have done it time and time again, who have lived that American dream. but more importantly, someone who’s done it and still gives back,” Trump Jr. told the nearly 200 attendees. “Jim is one of the few people in politics with a genuine love for the people of this state.”

The event was held at the Justice-owned Greenbrier Resort in White Sulphur Springs, with invites sent out 10 days ago. Justice said more than $100,000 was raised from Thursday’s events, with more checks expected. The idea for the fundraiser came after Trump Jr. had planned to be in the state to bow hunt with Justice.

“Then probably about three weeks ago I thought…since (Trump Jr.) is coming it’d be a nice start because I’ve even been criticized because I’m not raising money,” Justice said. “Well, I don’t think that I needed to go out right off day one and start raising money and everything. But you today are testimony to what we’re really going to do today.” 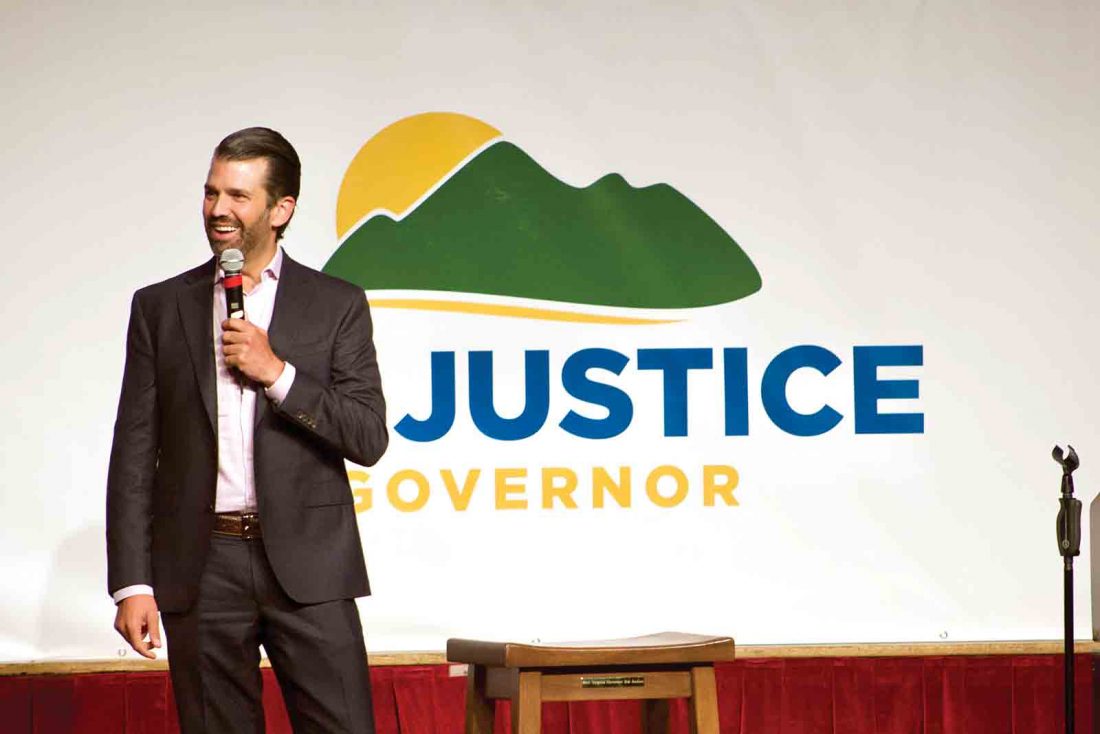 Donald Trump Jr. and Gov. Jim Justice greet the crowd at a political fundraiser for the governor Thursday. (Photo by Steven Allen Adams)

The fundraiser, which raised $57,650 for Justice, was almost all the money the governor raised during the 2nd quarter campaign finance reporting period between April and June.

Trump Jr. addressed the informal impeachment inquiry being conducted after President Trump allegedly offered a quid pro quo to the president of the Ukraine if they would turn over any information regarding vice president Joe Biden and his son Hunter’s business dealings. President Trump has maintained that he did nothing wrong during the phone call. Trump Jr. said he’s been compared to Biden, who has been accused of profiting off his father’s name.

“Of course, I am here in large part because of my father,” Trump Jr. said. “The difference is in a private company, I wasn’t doing it under the guise of being a public servant. I wasn’t making millions of dollars from my family when his father’s making $150,000 in the Senate.”

Justice has frequently brought up his friendship with the Trump family on the campaign trail and at official events. Trump Jr. and Justice have hunted and fished together, including in Greenbrier and Monroe counties in May 2017. Justice, who switched from Republican to Democrat to run for governor in 2016, announced his switch back to Republican in August 2017 at a rally held by President Trump in Huntington.

Trump Jr. said Justice’s switch from Democrat to Republican has been a common thing he has seen, as more and more white working class voters flee the Democratic Party for the Republican Party.

“Welcome to the GOP, Jim. It has been awesome to have you with us and that takes guts,” Trump Jr. said. “What would your grandfather say about the state of today’s Democrat party? Name one leading issue that they espouse today that would be in line with the issues that they did back in the day?”

Trump, at a campaign fundraiser for his presidential re-election effort hosted by coal magnate Bob Murray in July, reportedly told attendees that he supports Justice. In April, Trump 2020 staffers Bill Stepien and Justin Clark joined the campaign as advisers, along with Mike Lukach who served as campaign manager. Lukach was replaced last week by Roman Stauffer but continues to advise the campaign.

Justice’s agriculture businesses have also benefited from the Trump administration. The Associated Press reported Thursday that Justice Farms of North Carolina, which owns soybean and corn farmland near the Greenbrier Resort, received $125,000 through a subsidy program to help farmers affected by the U.S. trade war with China, hitting the program’s cap. Justice said, while his children run the agriculture business while he serves as governor, the trade war has hurt all soybean farmers.

“I haven’t been to our…operations in a long, long, long, long time,” Justice said. “The Chinese tariffs have driven soybean prices primarily down low for all farmers all across the country…All the farmers got that subsidy. That’s the truth about it. It is just more stones being thrown.”

Justice is the state’s only billionaire with a net worth of $1.5 billion. His companies, now in the hands of son Jay Justice and daughter Jill Justice, have been criticized for not paying vendors, state and local taxes, mine safety fines and penalties, with several court cases pending in multiple federal court jurisdictions.

Justice himself is being sued for allegedly not abiding by the state constitution and residing in Charleston. At least one criminal investigation by the U.S. Department of Justice’s Public Integrity Unit involving the formerly named Greenbrier Classic golf tournament and the non-profit that operates the tournament is ongoing.

Justice’s latest rankings for the 3rd quarter of 2019, according to Morning Consult, saw his disapproval numbers rise from 43 percent to 47 percent, while his approval numbers dropped a point between June and September from 43 percent to 42 percent. Trump Jr. compared the media scrutiny and accusations being hurled against President Trump to Justice’s situation, encouraging the attendees to stand with the governor.

“While (Justice) has done incredible things for this state, it’s not a fair fight and it won’t be,” Trump Jr. said. “We don’t get the benefit of the doubt in our side. They don’t bring up the false equivalencies. They only bring up their narrative. So, we need you as part of that. And I know there’s so many good friends of the governor in this room, so we just appreciate you staying there, for remaining steadfast and loyal, because I get that it’s not easy. I understand it’s not easy to be a conservative these days in America.”

The governor faces Woody Thrasher in the Republican primary, an engineer, businessman and former Commerce Department secretary who was fired by Justice in June 2018. Thrasher switched from Democrat to Republican and filed to challenge Justice in April. Justice also faces airline pilot and former Berkeley County delegate Mike Folk.