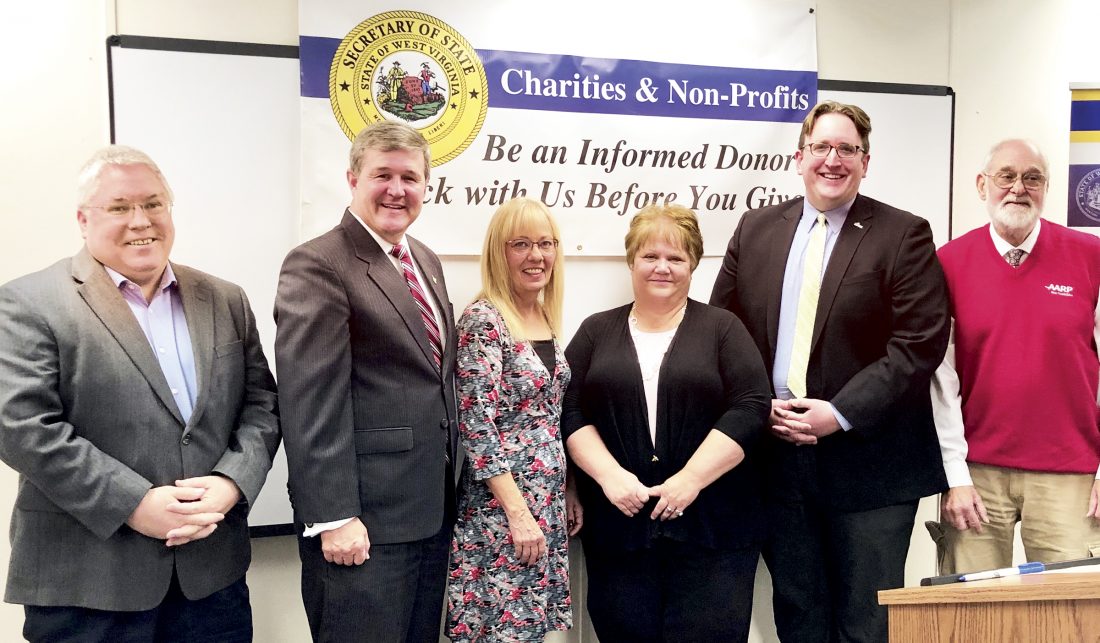 CHARLESTON — Two state departments and organizations representing seniors, charities and nonprofit groups Monday encouraged residents to know before they give.

The partners hope to use the week to remind residents that charitable giving is a great way to support causes they care about, but also to be aware of bad actors trying to defraud them.

“I’d like to just mention at the outset just how important it is that West Virginia have a healthy, responsible and growing charities and nonprofit sector, and that’s what this is all about,” Warner said. “This morning is encouraging people to give and be a part of that, but also to be cautious when doing so.

Most charities are doing the right thing, Morrisey said.

“They’re working really hard to help people who are in need, but as we know, every now and then you find bad apples in the mix,” he said.

The Consumer Protection Division in the Attorney General’s Office also investigates charities and nonprofits when complaints are filed.

“Part of the reason why we’re here today is we want to point out that if the public can find or they believe that there’s an entity that might be violating the law, call our office, call the secretary of state’s office,” Morrisey said. “We share enforcement authority on charitable fraud…we try to go after bad actors.”

Monday is 11 days out from the start of November and the beginning of the holiday season when many charities and nonprofits ramp up fundraising campaigns, Warner said.

“As we all move into the holiday season…there may be an increased opportunity to give and participate in the community, but then that’s also when they have the evil doers come out and take advantage at times,” Warner said. “The purpose of the Secretary of State’s charitable division is to ensure that charities are properly registered here in the state.”

Stonestreet with the AARP said the organizations frequently works with state agencies to make sure members have the tools and resources to spot deceptive charity and nonprofit activity, including through its Fraud Watch Network alerts and help line at 877 908-3360.

“It gives you free access to information collected from our partners here today and others, as well as local, state, and federal officials about how you can protect yourself,” Stonestreet said. “It’s free and open everyone, non-members, people of all ages, and you get to talk to a real live person.”

“We want to turn up the volume of giving in our state,” Daugherty said. “We want to guarantee that giving continues to grow in our state as the need grows, but more importantly help thriving communities.”

Residents can go to wvsos.gov and click on business to search for charities and nonprofits, look at disbursements, or file a complaint. Residents can also call 866-767-8683 to ask about charities, go to ago.wv.gov or call 1-800-368-8808 to file a consumer protection complaint.

“We urge people to take the time, research everything about the charity, check with the Secretary of State’s Office to make sure that the charity is bonafide, that it’s listed, and make sure that the dollars that are being spent on the charity are actually going for beneficial purposes,” Morrisey said. “It’s great to be here today with partners to talk about these issues and to send a message to fraudsters: You have no business in the State of West Virginia.”