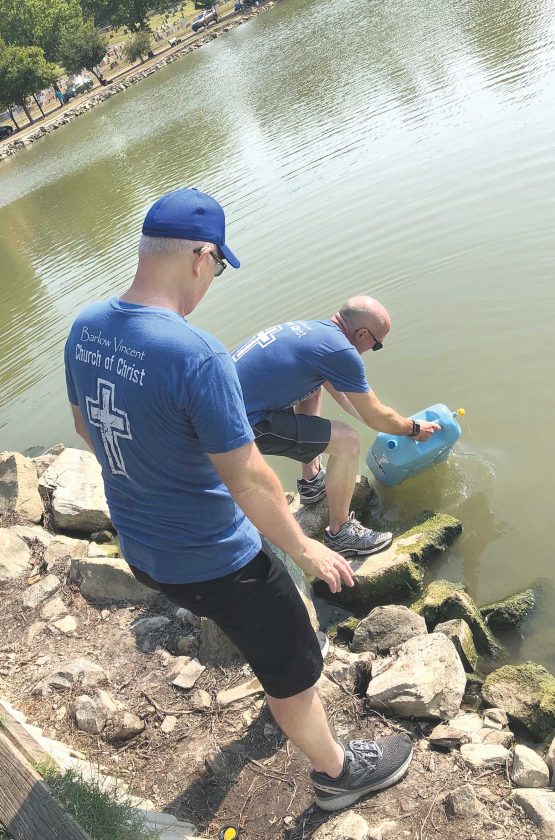 Court Witschy and Mark Daughety, with Barlow Vincent Church of Christ, participated in Saturday’s MOV Walk for Water at City Park. Here they are filling up a jerry can with pond water to carry for two miles, to represent the average distance those in rural areas and third world countries must walk to reach a water supply. (Photo by Madeline Scarborough)

“People all over the world die from infectious diseases caused by the lack of clean water,” said McCurry.

This is the third year the MOV Walk for Water has been in Parkersburg, and according to Parkersburg event coordinator Jeri Blackwell, it has grown every year.

The walk, which raises awareness of the lack of clean water even in the U.S., has people walk four miles around City Park. The first two miles are with an empty jerry can, the next two with a filled jerry can, weighing 45 pounds, to represent the average distance those in rural areas and third world countries must walk to reach a water supply.

“My husband and I started the walk, which is a fundraiser for the water program at Healing Hands International,. in Lancaster after the adoption of our third son, Judah,” Blackwell said.

According to Blackwell, Judah was adopted from China, and he had a water born illness when adopted.

“This really fueled our fire and made us wonder how we could help,” Blackwell said.

Blackwell said the water program has brought many areas access to clean water, and helped eliminate diseases such as cholera in the locations that wells have been drilled.

“Helping hands has drilled wells all over the world, including Judah’s orphanage,” said Blackwell, who has gone on multiple trips with Helping Hands to places such as Haiti to help place water wells.

The water program not only helps provide water to third world countries, but disaster stricken areas as well.

Hitting a bit closer to home is the raised awareness of the Mid-Ohio Valley’s own river, the Ohio River.

“The Ohio River has been ranked number one in multiple pollution studies, due to the amount of industrial pollution that has tainted the waterways,” said Blackwell.

Jeri Blackwell’s son, Jadon Blackwell, 10, has also found a passion in helping bring clean water to those in need.

“I have seen how happy something as simple as clean water can make people,” Jadon said.

He said before his family’s involvement, he had never stopped to consider what it was like in other countries, but that it makes him happy to know he has been able to contribute to a change.

All the money raised goes to the water program at Healing Hands International, which is one of eight humanitarian relief programs they offer.