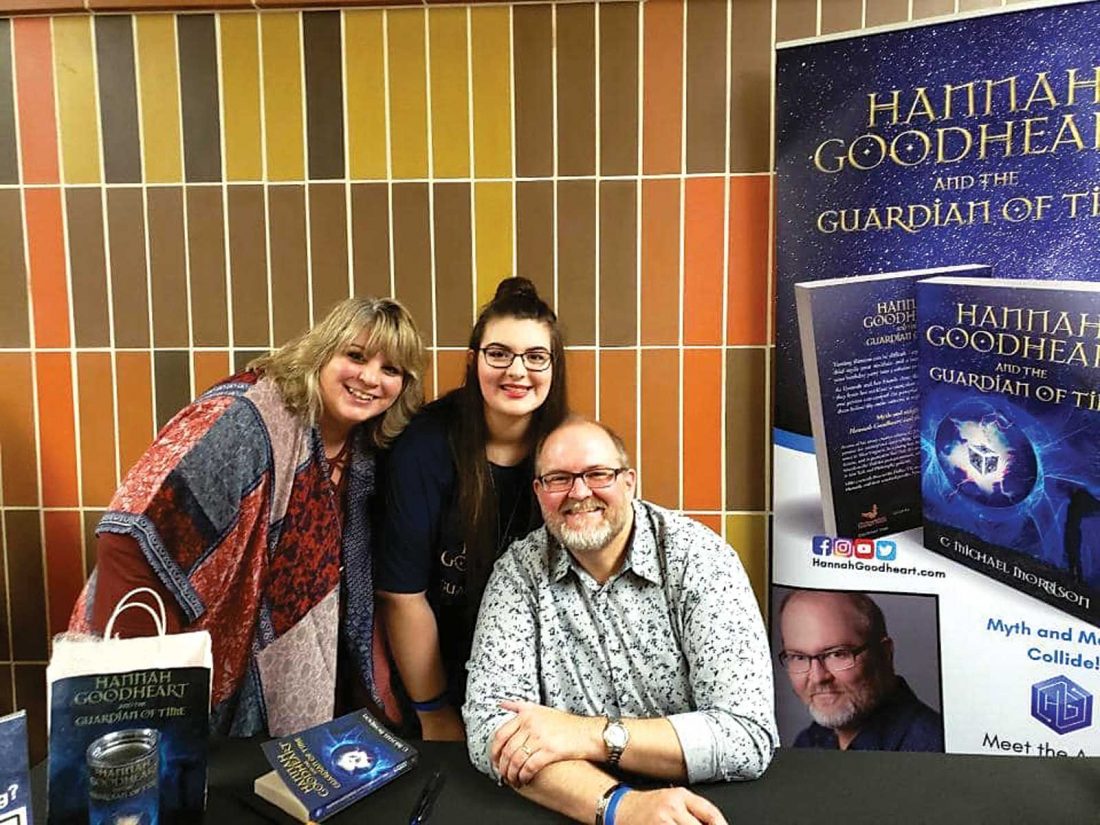 C. Michael Morrison, far right, poses with his wife, Dorinda, and daughter Hannah at the book launch party for his first novel, “Hannah Goodheart and the Guardian of Time” earlier in September at the Pogue Planetarium in Grand Prairie, Texas. Morrison will be at the West Virginia Book Festival Friday and Saturday at the Charleston Civic Center, at J&M Book Stores in Parkersburg and at St. Marys High School on Oct. 7. (Photo Provided)

PARKERSBURG — A St. Marys native inspired by his daughter to never quit writing has penned his first novel.

C. Michael Morrison, a Star Trek aficionado who is now lead pastor at a church in Plano, Texas, finished “Hannah Goodheart and the Guardian of Time” last year.

It’s about a girl about to turn 13 who finds a relic and discovers it was stolen by a malevolent time traveler bent on changing events, incorporating real-world issues in a fantasy realm. Hannah Goodheart must stop the traveler and restore the natural time line.

“I’ve had this story on my mind for a long time,” said Morrison, a graduate of St. Marys High School.

Morrison completed writing the book in 2017.

“It took over a year before I found a publisher and then another year for them to bring it to market,” he said.

“Hannah Goodheart and the Guardian of Time” is his first book, but not his first writing project. He has written numerous short stories.

While reading a story, his daughter, Hannah, from whom the hero of his book is named, came into his office and listened to the story, Morrison said. She was rapt by the story and encouraged him to never stop writing.

“A couple of days later I wrote the first line to the book,” Morrison said.

“Hannah Goodheart and the Guardian of Time” was published by Fawkes Press, a small, traditional publisher headquartered in Fort Worth, Texas. The release date is Tuesday.

Morrison will attend the West Virginia Book Festival on Friday and Saturday at Charleston Civic Center. Admission is free to the event, which will include New York Times best-selling writer James Patterson, he said.

He also will be at J&M Book Store in Vienna on Saturday evening and will speak at St. Marys High School on Oct. 7.

Morrison, a graduate of Welch College at Nashville, Tenn., was inspired in his youth by “A Wrinkle in Time” by Madeline L’Engle, Star Trek, C.S. Lewis and J.R.R. Tolkien, who wrote the “Lord of the Rings.” He also was influenced by Isaac Asimov, Ray Bradbury, Arthur C. Clark, Jules Verne and H.G. Wells.

He is an avid Star Trek fan and does a podcast, “Meta Treks,” with Zachary Fruhling, a professor of philosophy in San Francisco. Morrison is a fan of the latest editions in the Star Trek franchise, “Star Trek: Discovery” and the upcoming “Star Trek: Picard,” his favorite is the original “Star Trek.”

Erebos is the Greek god of darkness.

Morrison lives in the Dallas area with his wife, Dorinda, and daughter Hannah. He is the lead pastor of the Collin Creek Church in Plano.

While he is grateful for any success his writing brings, it won’t replace his calling.

“I don’t see myself ever stepping away from that,” Morrison said.