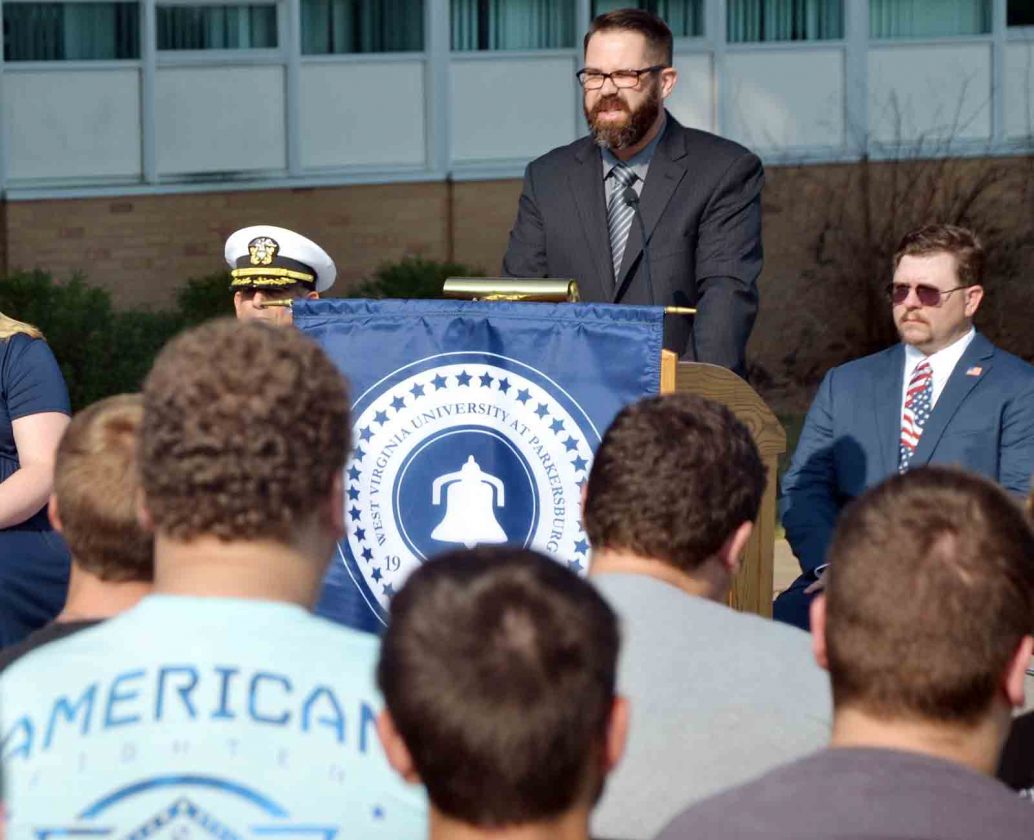 PARKERSBURG — People are starting to grow up in the Post 9-11 world without any personal connection to the events of that day and need to be educated about it, speakers at the West Virginia University at Parkersburg 9/11 Remembrance Ceremony told those gathered Wednesday.

Students, faculty, staff and others gathered outside the school to commemorate the anniversary of the terrorist attacks on the United States. Members of the Parkersburg High School Navy Jr. ROTC raised the American flag and rang the University Bell 18 times to commemorate how many years it has been since the attacks.

”It is to honor the service and sacrifice that our military, police and first-responders made by those who responded to those events,” he said. ”Many Americans, myself included, will never forget what happened on that tragic day.

”However other Americans, including some of our younger students, do not remember that day. Perhaps they were too young or not even born yet.” 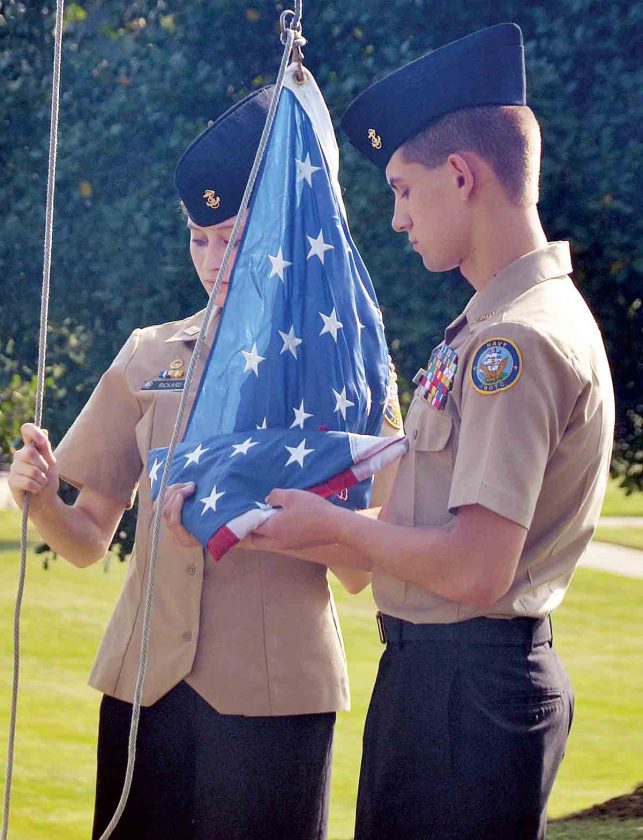 It has been 18 years since 19 terrorists affiliated with Al Qaeda hijacked four passenger planes and crashed them into the two towers of the World Trade Center in New York City and the Pentagon near Washington, D.C., while the other was believed to be bound for Washington, D.C. but the passengers fought back and the hijackers ended up crashing it in a field in Pennsylvania, Shearlock recounted.

”Almost 3,000 people died that day,” Shearlock said. ”These attacks prompted many changes in the United States and prompted the U.S. to begin fighting a global war on terrorism.”

Brady Whipkey, vice president of facilities and chief of staff to the president of WVU-P, conveyed President Chris Gilmer’s regrets about not being able to attend. Gilmer was in Washington, D.C., to speak to White House panels on underserved students and meet with members of the American Association of Community Colleges to discuss ways to serve students locally and across the nation.

Whipkey, a U.S. Army veteran, recognized those present who served in the military and as first responders. He commented on the personal price many have made to protect this country as well as the price their families pay and about those who still need help after their service.

”We cannot do what we do on a daily basis without what you have done and continue to do,” he said. ”To protect others is truly a unique quality.” 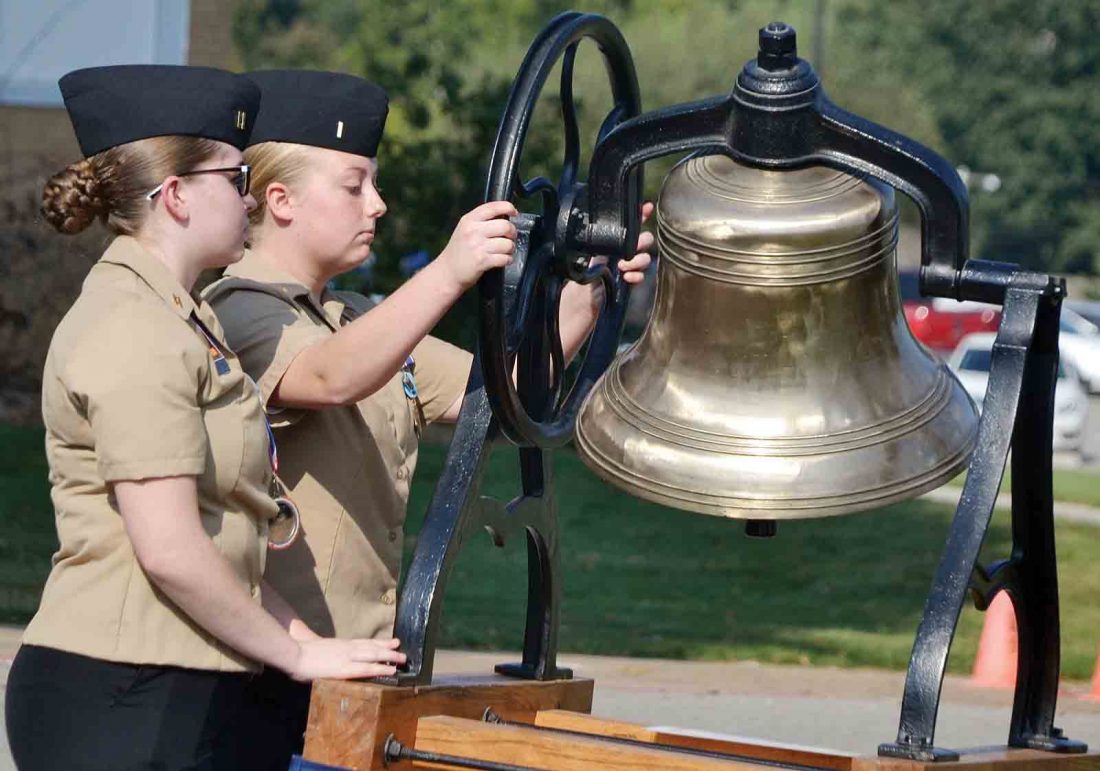 Members of the Eastwood Volunteer Fire Department were scheduled to be present at WVU-P but they got called out to a fire call. They received a round of applause when they were able to return at the end of the ceremony.

Capt. David Orzeroff, senior Naval Science instructor for the Navy Jr. ROTC at PHS, was the special guest speaker for the ceremony. A 30-plus year career U.S. Naval Officer, Orzeroff directed operations for a state-of-the-art Navy Watch Center which provided round-the-clock monitoring and response for naval special warfare forces who were deployed worldwide in the global War on Terror.

He served before, during and after the 9-11 terrorist attacks.

Orzeroff talked about the uneasy feelings many people have each year when 9-11 rolls around, remembering the World Trade Center and the Pentagon that day as well as the people who were on the plane that was crashed in Pennsylvania before it could reach its target, which many people believed was the U.S. Capitol in Washington, D.C. 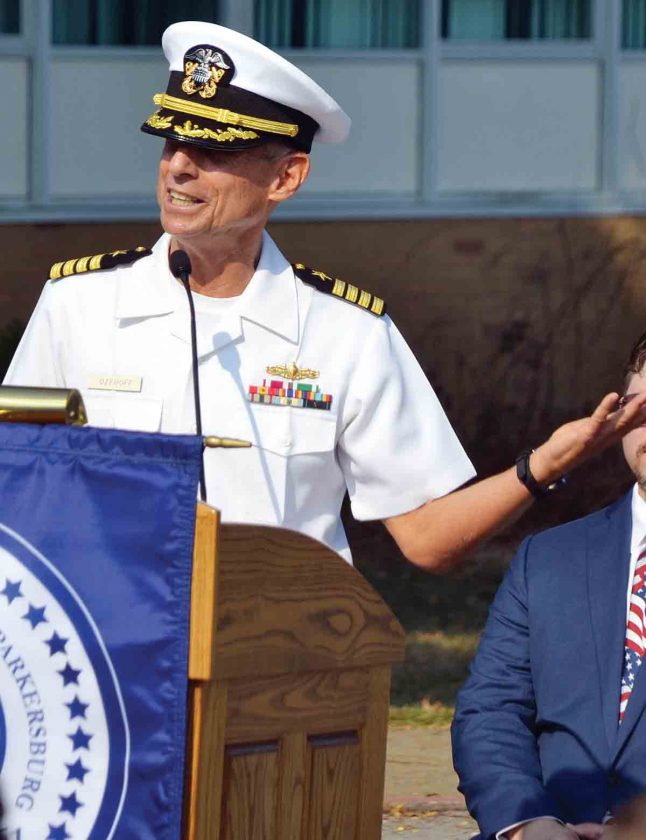 He talked about the cadets he is helping to train and how he wants to get across to them how that day impacted the nation.

The oldest of the cadets he brought with him was only 6 months old when the attacks occurred and the other three had not been born yet.

The only thing he can compare it to is his own generation trying to understand what happened regarding the attack on Pearl Harbor which brought the United States into World War II in December 1941.

”When I was in high school many of my teachers were World War II veterans and they would tell us about World War II,” he said. ”I can only imagine that what people felt about Pearl Harbor is how I feel and many of you feel about 9/11.”

It was his teachers and family who helped him, in some small way, understand the events of Pearl Harbor and what it led to.

He now feels that responsibility to teach the younger generation in the same way about 9/11. He is planning to do a lesson today with his students about what happened on 9/11 and its aftermath so they can understand its importance.

”We have been at war ever since,” he said of the continuing War on Terror around the world. ”People continue to give their lives and are wounded. First-responders continue to sacrifice to this day.”

”I have some measure of confidence because of the great kids I see out here,” he said. ”I think you all are up to it.”

Around 40 percent of their ROTC students go into the military.

”These people are America’s best and they have it in them to win the global War on Terror,” Orzeroff said.