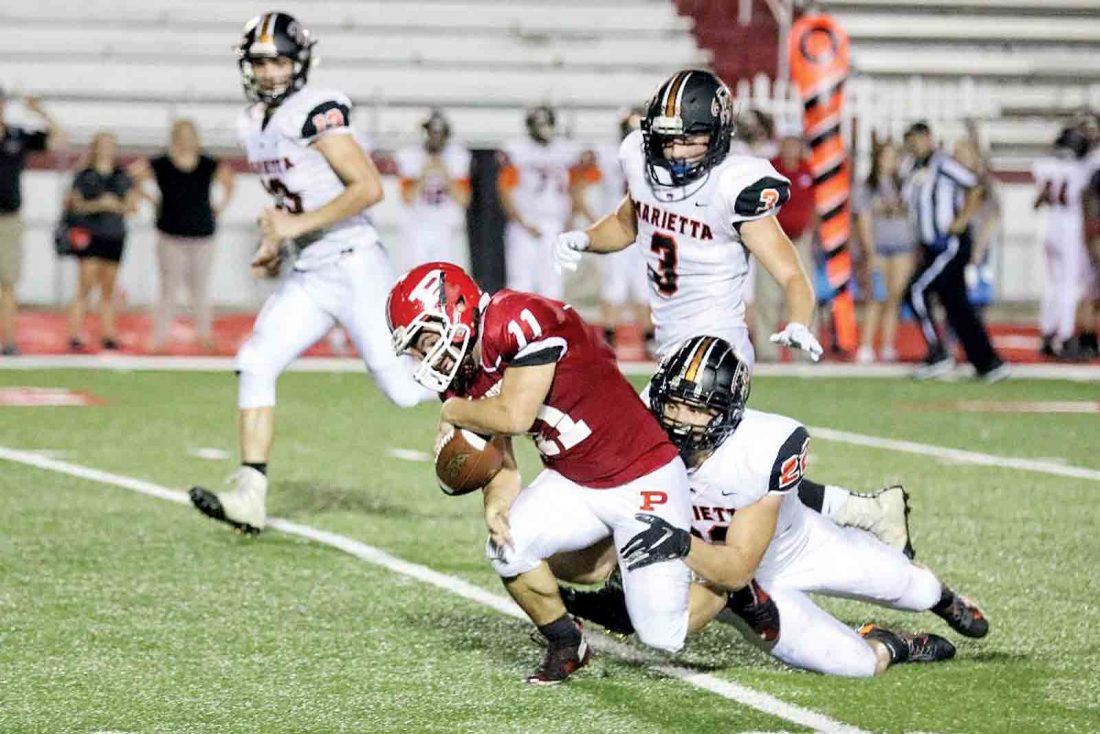 Parkersburg High’s Anthony Craig (11) attempts to break out of a tackle attempt from Marietta’s Chase Taylor (22) during the Big Reds’ 42-21 win over the Tigers Friday night at Stadium Field. Craig, who just returned from an injury, ran for 99 yards on 19 carries for head coach Mike Byus. (Photo by Duane West)

PARKERSBURG — Homecoming was a happy one here Friday night inside Stadium Field for host Parkersburg as the Big Reds tallied the final three touchdowns en route to doubling up Marietta, 42-21.

The Tigers evened the game at 21-all late in the third when Corbin Alkire hooked up with Donavon Wheeler on a fourth-and-goal play from the 27 for a touchdown and Sean Fournier booted the extra point.

Despite a 62-yard kickoff return by Tony Munos, the Tigers of sixth-year head coach Jason Schob watched the drive come up short. A holding call proved costly as Fournier’s 40-yard field goal was shy of the uprights.

Later, facing a fourth-and-10 at the MHS 20, Braeden Mason made an all-hands extended grab for a 16-yard gain over the middle. Anthony Craig, who was making his first appearance of the campaign, bulled in from the 1 for his fourth rushing score of the night and the Tigers trailed by two scores with 6:07 to go.

Potts ended up getting the icing on the cake as he intercepted Alkire on Marietta’s next drive and raced 49 yards for a touchdown. After picking it off a step across midfield, he sprinted down the Tiger sideline before making a cutback at the 25 and strolling into the end zone.

“We didn’t want to get into that situation, but I’m proud of the kids for bouncing back,” said Byus, whose squad led 21-7 at halftime thanks to Craig TD runs of 1, 3 and 1 yard. “They bounced back and accepted the challenge when Marietta got back in the game like they did. The defense really played pretty well all night. Our tackles were getting turned inside and Alkire was finding holes. We weren’t lining up right in the secondary and that’s what was aggravating me on the sidelines.

“Offensively, I thought we executed pretty well most of the night. We had that lull coming out of halftime just like the whole team did. I think they thought they already won or something. Our seniors got to focus a little better and understand things. It was not the underclassmen who made the mental mistakes. If we would’ve let this one get away the seniors couldn’t have looked at the underclassmen and blamed them.”

Mason, who finished with seven grabs for 78 yards, hauled in a first quarter reception and was nearing the red zone before he lost the ball and Wheeler recovered. PHS forced a three-and-out, got a 41-yard run from Singer and Craig put the Big Reds on the board at 7:15 of the first.

After Potts had a 28-yard field goal go wide left late in the first, disaster struck for the hosts on their next series when Matt Curry’s punt was blocked by Chase Taylor. Finally, Wheeler managed to scoop the ball up at the 7 and darted into the end zone.

Craig’s 3-yard TD burst came at 5:42 of the second. Big Red Xadrian Snodgrass nearly had a pick-6 on Marietta’s next drive and the Tigers were forced to punt after Aaron Kupfner sacked Alkire, one of seven for PHS on the night. Craig added his third score with 2:20 to go before intermission.

“He got a concussion, I think, the first possession of the second half,” coach Schob said of Taylor, the Tigers’ starting tailback. “I thought the first half we came out a little lackadaisical. I’m really, really proud of them.

Marietta, which entered the fray at 3-1 and ranked No. 12 in Ohio Division III, Region 11, tried to score late, but was thwarted in part by sacks from Parkersburg’s Casey Mahoney and CJ Wade.

Along with hitting 11 of 18 attempts for 175 yards, Singer also carried the ball 15 times for 132 stripes. Craig added 21 rushes for 107 yards. Carter King ripped off a 63-yard run for the Big Reds on the failed field goal drive.

The Tigers, who play next Friday at Cambridge, managed just 29 yards rushing on 28 attempts. Meanwhile, the Big Reds rushed 41 times for 294 yards.

PHS, which had a Michael Owen interception nullified by penalty on Wheeler’s fourth-down scoring grab, will have a week off before returning to action on Friday, Oct. 11 with a Mountain State Athletic Conference road game at George Washington.