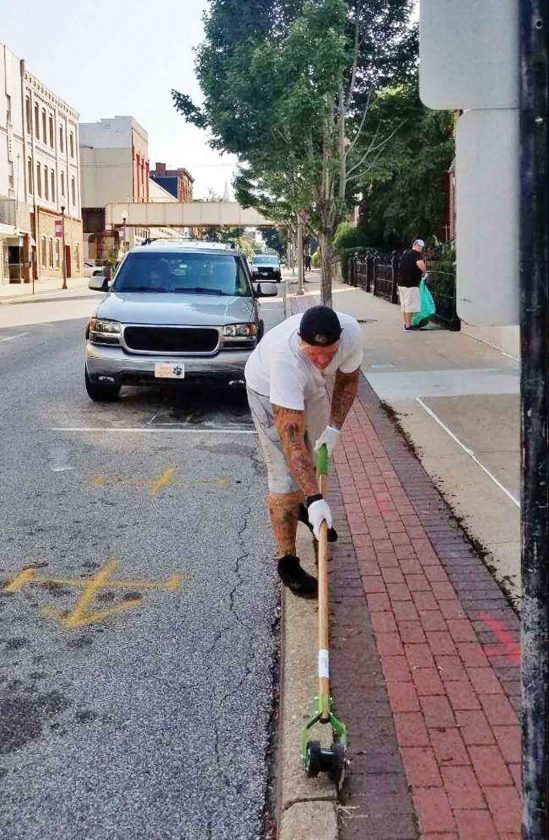 Recovery Point client Charlie Miller uses an edger on a section of sidewalk on Market Street in downtown Parkersburg during a recent cleanup effort as part of the Downtown Ambassadors pilot program. (Photo provided by Stacy DeCicco)

PARKERSBURG — A partnership between Downtown PKB and the United Way coordinates volunteers to give downtown property owners and businesses a helping hand.

The pilot stage of the Downtown Ambassadors program has focused on cleaning up the area. As of Friday, volunteers from Recovery Point, the nonprofit, residential substance abuse treatment facility, had logged more than 270 hours over the course of 15 days and collected 175 bags of trash over 79 city blocks, said Stacy DeCicco, executive director of the United Way Alliance of the Mid-Ohio Valley.

Now, the program is moving out of the pilot phase and organizers are looking to expand the volunteer base beyond Recovery Point and the activities beyond cleanup.

“It’s good for this community to see that these are people with strong skillsets,” DeCicco said. “I don’t know that they’ve been out a single day that they haven’t gotten some kind of random feedback, and it’s all been positive.”

The cleanup work would otherwise be done by city employees, business owners or during the biannual volunteer cleanups organized by Downtown PKB, said Wendy Shriver, executive director of that organization, which works to promote and enhance the city’s central business district.

“When people drive through your downtown and they see trash and weeds, it looks like there’s no investment going on, and that’s the exact opposite of what’s happening,” she said.

Fortunately, DeCicco said, the United Way’s volunteer center has the resources to schedule the work and the men of Recovery Point have the skills and desire to do those jobs, and more.

“These guys have a lot of pride in what they’re doing,” Shriver said. “They work hard. It’s not easy.”

The idea for the program grew out of the United Way’s Day of Action in June. Recovery Point sent 30 volunteers to help in a variety of projects, including painting a door for a downtown property owner who purchased the materials.

“The ones that were in downtown had a very positive experience,” Shriver said. “Then we started talking and were like, ‘How can we make this bigger?'”

Volunteer Downtown Ambassadors could act as support staff for events and concerts, move office furniture or even shovel snow from sidewalks, DeCicco and Shriver said. Snow removal is technically the responsibility of the property owner, but Shriver said some small businesses might not have the manpower to do it.

Exterior work like painting could be another possibility. Shriver said such improvements don’t only help the property owner.

And when one building improves, it might encourage neighbors to do the same, Shriver said.

A collection of tools is being built up for the program with the help of a $1,000 contribution from the McDonough Foundation and $2,500 from DuPont. Chemours is donating a storage shed in which to keep them, DeCicco said.

People wanting to volunteer or suggest potential projects can contact the United Way at 304-580-0570.