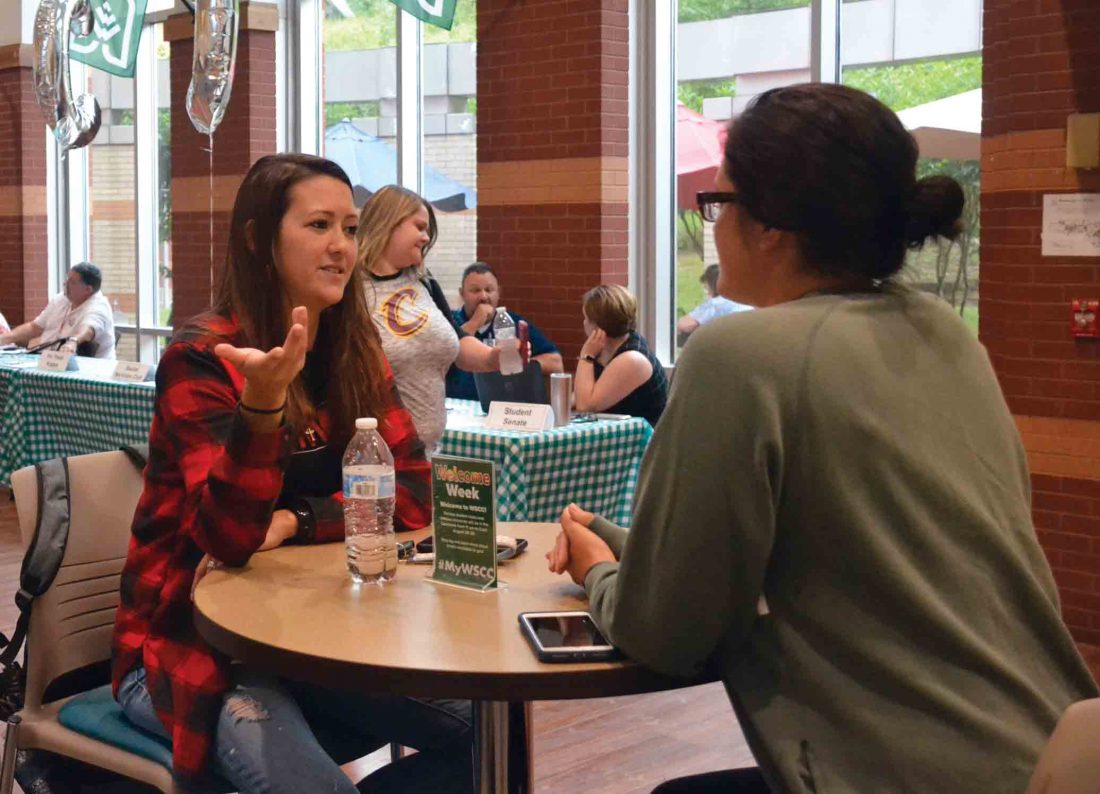 Casey Jo Higgins talks with her friend Amanda Harvey in the commons room at Washington State Community College following a three-hour class in business management and technology. The course of Higgins’ life changed after she received a double lung transplant four years ago. (Photo by Michael Kelly)

MARIETTA — Casey Jo Higgins drives a 1959 Dodge Coronet. That’s an important bit of trivia in the 31-year-old Washington State Community College student’s profile because it offers a glimpse into her future.

She’s one semester away from graduating in business management and technology, with the intent of helping manage her father’s dream business, buying and selling vintage cars, a trade he intends to take up in his retirement. Her dad bought her the Dodge, she said, and it gets attention when she drives it around.

Going to college and managing a business is a recent plan, reflecting dramatic changes that have happened in her life.

Higgins, of Marietta, lived a fairly conventional life as a child, even though she was diagnosed with cystic fibrosis.

“I always played sports, right up to high school, when it got too competitive,” she said, sitting at a table off the college commons room. “I just wanted to have fun. I didn’t really have a career plan for after school. I got married, divorced, and then I got really sick. “

Cystic fibrosis is a heredity disease that causes the lungs to progressively fill with thick fluid.

“I could barely put on a shirt without having to lay down,” she said.

The only cure is a lung transplant.

“I was on the transplant list for about a year. There were three calls that didn’t work out, but I got that fourth call on Dec. 9, 2015,” she said. “I remember I was getting ready to go to the mall with a friend when they called me.”

The procedure was done at the University of Pittsburgh Medical Center, and kept her in the hospital for 30 days, after which she stayed with a sister who lived nearby – one of the conditions of receiving a transplant was that she had to live for three months no more than an hour’s drive of the hospital.

“They kept me on a ventilator tube for three days after I woke up,” she said. “When they took it out, I took my first real breath – fresh air. I called my mom, and she cried.”

The second chance at life came with sober reflections, she said.

“I think about the donor, it’s really sort of bittersweet,” she said. “He had a son.”

During the long recovery, she had a lot of time to think about the future.

“I was at home, and I really didn’t have much to do. My dad really loves old cars, and when he retires he wants to do that as a business,” she said. From that came the decision to go to college and study business management, so she could help him realize that dream. She and her closest friend, Amanda Harvey, enrolled together.

Brad Merritt teaches business management at Washington State Community College, and he said Higgins is the sort of student most teachers dream about.

“She’s a fantastic student, she sits right up in front of the class with her friend Amanda, they pay attention, they take notes, ask questions,” he said. “For someone who’s gone through what she has, it’s great to see her striving to be the best she can be. She asks analytical questions, and we are studying difficult concepts in micro- and macro-economics.”

“She really wants to give back. She’s helped at the EVE, Inc., auction for two years, and Empty Bowls,” he said. “She spearheaded a drive on campus for six weeks to collect things that EVE needs. She’s somebody who cares and wants to give back and help people.”

At their ages, Higgins and Harvey are considered nontraditional students.

“I love having them in class for their leadership. They’ll show other students what work ethic is all about,” Merritt said.

Merritt successfully nominated Higgins for student of the month for August.

“For student of the month, we ask the faculty to evaluate not just for academic performance but also for community and campus engagement,” said Melissa Richman in the college communications office. “We look for students making an impact, and Casey was an obvious choice, an easy pick.”

“All the teachers are super nice and willing to help, I just love it,” she said. “And I’ve loved all the support everyone has given me, but not so much the attention. I’m pretty quiet.”